Women Of Wonder Day 2011, a Benefit Spectacular in Oregon, New Jersey and Texas!

Returning for a SIXTH year with a new name and an expanded mission!
Images of the World’s Most Iconic Heroines Will Help Benefit Domestic Violence Prevention-Intervention Agencies in Oregon, New Jersey, and Texas! 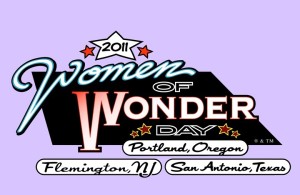 This year, the event will take on a new name and an expanded mission! On October 30, 2011, the new Women of Wonder Day – again as a part of National Domestic Violence Awareness Month – will take place, returning to Excalibur Books in Portland, Oregon, and Comic Fusion in Flemington, New Jersey, as well as at Heroes and Fantasies in San Antonio, Texas!

This year’s contributions for auction include not only artwork featuring heroines from the world of comics – Wonder Woman, She-Hulk, Storm, Michonne from Walking Dead, Leetah from ElfQuest – but also from the world of media as well, including Lisbeth Salander, Buffy the Vampire Slayer, Hermione Granger, and others! Plus, TV series such as Glee, Nikita, Big Bang Theory, Castle, and others have donated special items as well! And the all-ages events will include artists and writers signing autographs at each event, as well as costumed characters with whom you can take photos! And in Portland, white-hot writer Brian Michael Bendis is auctioning off a role in one of his upcoming comics!

Excalibur Comics, 2444 SE Hawthorne Blvd, Portland, Oregon
Sunday, October 30, 2011 – noon-6pm, FREE
An ALL AGES celebration and benefit for domestic violence prevention-intervention agencies! Proceeds of the event will benefit Bradley Angle, one of Portland’s leading domestic violence agencies. The free all-ages event will include local and national artists signing comics and special edition prints, as well as a silent auction of original art and collectibles. There will be costumed super-heroes, pirates, and science fiction characters on-site, raffles and prizes, and more.

Andy Mangels is chairing the Portland event, with Debbie Fagnant and Bradley Angle’s Rebecca Norman. “Women of Wonder Day is so special to our agency,” says Norman. “For the last six years, it’s not only been a key part of how we fund our domestic violence programs, but it’s also become a day that brings a different kind of energy and excitement into the work we do. Women of Wonder Day helps us reach out to an audience that might not know our services are available or might have wanted to get involved with charity work but never knew how. And the new format of the event just increases the potential to spread awareness–it means we’re going to be able to celebrate even more heroines, and involve even more fans!”

“In 2010 alone, more than 40 Oregonians lost their lives due to domestic violence, which brings the number of victims since the downturn of the economy to over 100. During Domestic Violence Awareness Month and on Women of Wonder Day, we remember that countless men, women, and children continue to live in unsafe situations and fighting for survival–and we celebrate everyone’s potential to be a hero. How can you be a hero? Tell a friend or family member who you believe might be experiencing domestic violence that they deserve to be safe and help them find resources like Bradley Angle; bid on one of the amazing pieces of original comic book art that we’re auctioning off on EBay and at Excalibur Comics during Women of Wonder Day; and bring your family to the event and talk to your kids about what healthy relationships look like. You can be a hero, too!”

Comic Fusion, 42 Main St., Flemington, New Jersey
Saturday and Sunday, October 29-30, 2011 – noon-5pm, FREE
An ALL AGES celebration and benefit for a domestic violence shelter will take place on Saturday and Sunday, October 29th and 30th, in Flemington, NJ, at Comic Fusion, as part of their “Super-Hero Weekend.” Proceeds of the event will benefit Safe in Hunterdon, a domestic violence shelter in New Jersey. Comic creators will sign and sketch, and costumed characters will be available for photos.

Stacy Korn is chairing the New Jersey event with Beth Delaney. Korn says, “From our first small event, this has grown into a Super Event our community loves! Super Heroes, Super Artists and Super Volunteers are all ready to put some smiles on faces. We look forward to raising money for such a worthy cause as SAFE in Hunterdon!”

Heroes and Fantasies, 4945 NW Loop 410, San Antonio, Texas
Sunday, October 30, 2011 – noon-5pm – FREE
An ALL AGES benefit and celebration for Domestic Violence programs at Family Violence Prevention Services of San Antonio! The free all-ages event will include local and national artists signing comics and sketching art, as well as a silent auction of original art and collectibles. There will be costumed characters on-site, raffles and prizes, and more.

For additional information about any event, or print-ready images, contact:
Andy Mangels – AMangelsSW@aol.com