Women of Wonder Day Returns for a 7th Year

Returning for a SEVENTH spectacular year! Images of the World’s Most Iconic Heroines Will Help Benefit Domestic Violence Prevention-Intervention Agencies in Oregon and Texas! 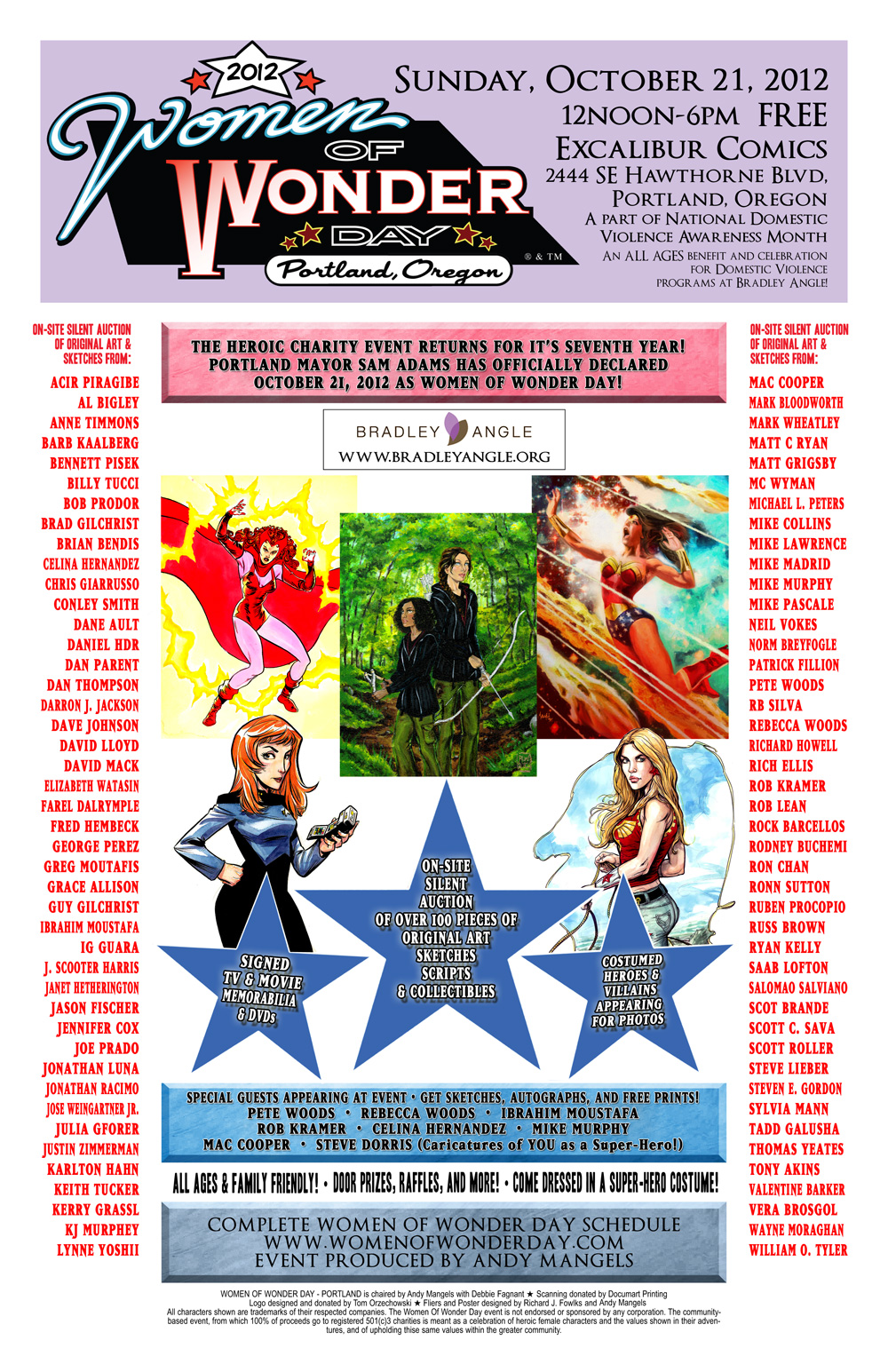 On October 21, 2012, Women of Wonder Day — a part of National Domestic Violence Awareness Month — will take place, returning to Excalibur Books in Portland, Oregon and Heroes and Fantasies in San Antonio, Texas!

2012’s contributions for auction include not only artwork featuring heroines from the world of comics — Wonder Woman, Storm, Supergirl, Spider-Woman, Scarlet Witch — but also from the world of media as well, including Katniss Everdeen from Hunger Games, Thundercats, the Bionic Woman, Uhura, Dana Scully, and others! Plus, TV series such as Glee, Criminal Minds, V, and others have donated special items as well! And the all-ages events will include artists and writers signing autographs at each event, as well as costumed characters with whom you can take photos!

The website for Women of Wonder Day is www.womenofwonderday.com

Over 250 pieces of original artwork and collectibles will be auctioned between the two Women of Wonder Day events. All art is posted to view at the event and at WomenOfWonderDay.com.

Portland’s Mayor, Sam Adams, has officially declared October 21st to be “Women of Wonder Day ” in the City of Roses.

Previous Wonder Woman Day events have raised a grand total of more than $135,000 to benefit survivors of domestic violence and their children. 100% of all proceeds went to the charities.

Producing the annual event for the seventh year is best-selling author and DVD documentary director Andy Mangels, who is also the curator of the online Wonder Woman Museum, and one of the world’s top experts on super-heroines.

Excalibur Comics, 2444 SE Hawthorne Blvd, Portland, Oregon
Sunday, October 21, 2012 – noon-6pm, FREE
An ALL AGES celebration and benefit for domestic violence prevention-intervention agencies! Proceeds of the event will benefit Bradley Angle, one of Portland’s leading domestic violence agencies. The free all-ages event will include local and national artists signing comics and special edition prints, as well as a silent auction of original art and collectibles. There will be costumed super-heroes, pirates, and science fiction characters on-site, raffles and prizes, and more.

Heroes and Fantasies, 4945 NW Loop 410, San Antonio, Texas
Sunday, October 21, 2012 — noon-5pm — FREE
An ALL AGES benefit and celebration for Domestic Violence programs at Family Violence Prevention Services of San Antonio! The free all-ages event will include local artists signing comics and sketching art, as well as a silent auction of original art and collectibles. There will be costumed characters on-site, raffles prizes, a game show, costume contest, and more. Fred Bronaugh is chairing the event with Adam Conley.

For additional information about any event, contact Andy Mangels at AMangelsSW@aol.com

For additional information about the San Antonio event, contact Fred Bronaugh at wfredbh3@hotmail.com