Why Every LGBT Comic Fan Should Own This Book!

Big Two got you down? Is it pricing? Page count? Are you still mad about buying that Astonishing X-Men: Ghost Boxes #1 issue? (I am) Are you looking to spend your money on small press independent comics? And since we’re voting with our dollars, shouldn’t we be supporting gay and gay-friendly creators of indie books? Wouldn’t it be great if there was an anthology with an anti-bully “It Gets Better” theme? Then, may I recommend you get your hands on a copy of the CBLDF 2011 Annual?

Here are some highlights:

-Page one is an introduction featuring editor Bob Schreck (illustrated by Casanova’s Fabio Moon and Gabriel Ba) letting us know that he did indeed embrace Dan Savage’s “It Gets Better” theme for the comic.

-Matt Wagner gives us a four-page Grendel story in black, white, and grey tones with sparse bits of red. The first panel begins at the aftermath of some teenage gay bashing (the red we see on the page is the blood streaming from they gay kid’s nose). The next three pages are a flashback to homophobic mobsters and Grendel talking them down from their hate crime. The story ends with one gay character telling another “It gets better, kid. Even if it is a bit hard to tell sometimes.”

-Page seven is a portrait of Alan Turing by Frank Quitely, seemingly a computer screenshot with only Turing’s head fully rendered, and the phrase “Google Him!” underneath his name. Simple but effective. Google him.

-Next we get a two page “game of perception” by Batwoman’s JH WIlliams III. It took me several reads to fully appreciate what all was in those two pages; gotta love a magic trick in a comic book.

-Kevin McCulloch and Dave Cooper present a one-page six-panel gag strip. It took me a few minutes to realize that not only was Dave Cooper’s art familiar but that I was familiar with Cooper through Nickelodeon Magazine, which, after you see the strip, you can understand why it took me a minute to connect the two. 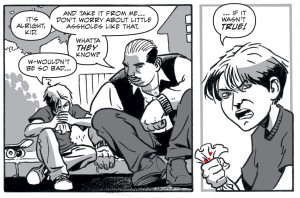 -Then Cowboy Ninja Viking by AJ Lieberman and Riley Rossmo has the three title characters up against the FCC, the National School Board Textbook Committee, and a list of banned books (one of which is “And Tango Makes Three” about gay penguin parents). Great framing device for the discussion, and a great discussion. After reading this I still have no idea what Cowboy Ninja Viking is about but I know that awesomeness is involved.

-Steve Niles and Michael Montenat give us a two-page “It Gets Better” story from Niles’ perspective, which appears to be from inside a time machine. 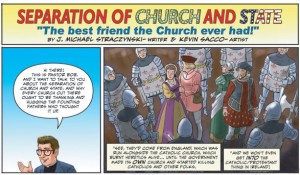 -Carla Speed McNeil tells of her experiences with her son who has Trisomy 21 (aka Down Syndrome but McNeil will fill you in on all that). Most of the stories throughout this Annual are writers/artists/cartoonists on their soapbox using the comic medium to literally illustrate their point. Rightfully so. They all have something meaningful to say. McNeil’s story is told with a mother’s passion and a cartoonist’s sense of humor. Nothing of gay interest in this story. Everything of human interest in this story.

-Then Michael Bramley and Fred Hembeck have a two-page science fiction silent tale of society dealing with those who are different. It is essentially an “It Gets Better” story with universal appeal. I think my decision to buy the Annual was based on Hembeck’s cartoon.

-Shane Davis and Michelle Davis have a one page illustration titled “Radiation.” It’s a well-done painting depicting the subjects of nightmares. Unfortunately, “It Gets Better” doesn’t apply to nuclear war.

-Fresh off “Habibi”, Craig Thompson (in color!) illustrates Kazim Ali’s tale of growing up gay in the Muslim faith.

-J. Michael Straczynski and Kevin Sacco have a two-page tale about the history/reasoning behind the separation of church and state.

-“The Conversation” by Dara Naraghi and Christopher Mitten is another plea/reasoning for the separation of church and state from a Muslim perspective and the “morality police” in Iran.

-Judd Winick and Thiago Micalopulos give us the “Great, Unsung Moment of the History of Free Speech” in a series of one-panel gags depicting honesty in all its profane glory.

-Then Elephantmen…naked Elephantmen (um, they’re wearing shoes) and naked Humanwomen (just women) in paper doll fashion. Are you reading Elephantmen? You should be, and not for nudity’s sake, but just because it’s amazing.

-The final story in the book is Mark Waid’s “It Gets Better” with Jeff Lemire on art and Lee Loughridge on breathtaking colors. This is my favorite “It Gets Better” ever, even though it’s all though the eyes of a straight man. It gives you an emotional set-up anyone can relate to, the kind of tension that makes you want to yell “don’t do it!” and a satisfying ending about finding your purpose on this planet. And it has Lemire doing some cool superhero pastiche.

There is not enough space to mention all the contributors and contributions in the CBLDF 2011 Annual. Letterers and colorists, especially. It should be worth noting that the Big Two do contribute a handful of pin-up style pages, nothing of note, but they get an “A” for effort. This book and the CBLDF are worth the five dollars this comic costs. Then spend the rest of your money on some cool indie books.

Editors’ Note – For more on this awesome organization and the 2011 annual check out www.CBLDF.org! Thanks for reading! – PKA