One of the best parts of Halloween is being able to don masks and costumes and become somebody else for a while. As my childhood peers enjoyed dressing up as ghosts and witches or sports players, I always wanted to be the superhero. I have ever preferred the champion to the monster. Instances arise in comics, however, where the former is forced to become the latter. 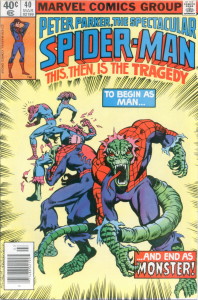 In 1980, Peter Parker the Spectacular Spider-Man #39 & #40 presents just such a story. Starting off at a full gallop, the adventure by master scribe Bill Mantlo has Doctor Curt Connors summoning Spider-man with concerns that the wall-crawling hero may have been infected by a device he’d recently used to stop the good doctor while in his reptilian alter-ego, the Lizard. An offer to check Spider-man’s blood to verify the presence of the lizard toxin is met with a severe reaction as Spidey leaps up onto the wall in refusal.

His concern is that Doc Connors might be able to reveal his civilian identity through his blood type, a bit of paranoia that seems extreme even by Peter Parker standards. To ensure his friend that his in perfect health, Spider-man hefts an entire lab counter over his head, another overreaction, one that results in all the expensive scientific equipment crashing to floor. Our hero shows no sign of remorse or even an inkling that this was not the brightest move he could have made. Both Dr. Connors and we know that Peter’s personality and reasoning are becoming altered.

Later in that issue, after showing his increasing short temper to his friends, a disoriented Peter Parker suits up as Spider-man to battle a short-lived psychic villain called the Schizoid Man. Arguing with himself as he hurtles objects both real and conjured at our hero as well as at innocent passersby, the deranged antagonist raises Spidey’s ire to the point that he not only defeats the villain, but once having done so, nearly beats him to death. The fight sequences, as with everything in this issue, are strikingly rendered by John Romita Jr. and Jim Mooney. They are fully up to the task of the explosive final splash page after Spider-man runs from friend Curt Connors to finally transform into the Spider-Lizard. 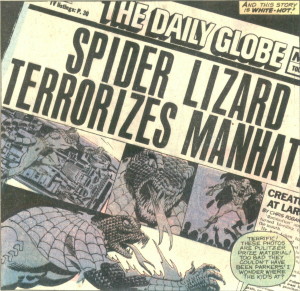 The next issue’s art chores are taken up by Frank Springer and Ricardo Villamonte, unveiling scenes of the savage Spider-Lizard tearing through New York City, attacking those whom Spider-man might confront, such as a group of car thieves, whom he lays into with unrestrained savagery. When Dr. Connors tracks our hero down (which isn’t hard to do, as he’s hardly keeping a low profile), he gets a water tower thrown at him for his trouble. Things escalate rapidly and the following pages seem more like a 1950’s monster movie than a 1980’s superhero comic as the Spider-Lizard takes to the streets and is set upon—to very little result—by police and swat teams. Guns, gas grenades, and all other weapons are useless against the tough lizard hide of the monster that was formerly one of the city’s primary protectors. We know all too well that the only thing that can save Peter now is the antidote.

The climax is perfectly set. Connors confronts the Spider-Lizard in a sewer, trying to reason with his friend who is now and unreasoning beast. As the Spider-Lizard lashes out, the vial with the antidote is smashed. The hissing creature hefts the comparatively small scientist over his head to smash him as well. 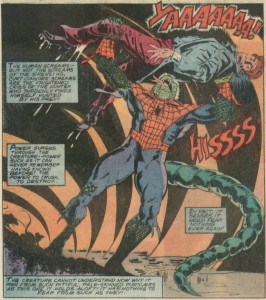 But something stops him. We have a glimmer behind those unfeeling reptilian eyes that perhaps some portion of our hero is still there, fighting to free himself. That second’s hesitation is all that is needed for Dr. Connors to produce a backup vial of the antidote (hey, he’s a reformed villain, he’s not stupid!) and administer it. The adrenaline rush is still not over, as the sewer fills with rushing water, forcing Peter to save his friend from drowning. From beginning to end, the saga of the Spider-Lizard is an enthralling, scaly thrill-ride which effectively presents genuine fear that we could well lose our hero to a monster he’s forced to become. You won’t find better suited Halloween reading than that. Or will you? 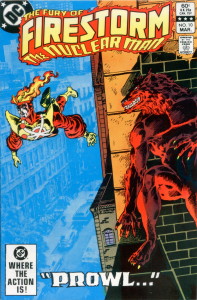 For that, let’s take a look at The Fury of Firestorm the Nuclear Man issues #10-#13 from 1983. Written by Gerry Conway with beautifully detailed artwork by Pat Broderick and Rodin Rodriguez, this story about the return of the feral beast Hyena has all the ingredients of strong werewolf chiller, with a superhero twist. The premise is a nervous one, as family and friends await the return of Summer Day, a girl whose cheery name is in direct contrast to her deadly nature. Summer is the sister of hero Ronnie Raymond’s girlfriend, and the former foe of Firestorm in her were-beast form as the Hyena.

Everyone is on edge, wondering if the therapist who has been treating Summer, the exotic Dr. Jivan Shi, has been able to help the girl reach into her mind and quell the shapeshifting curse that’s been controlling her. When Summer disappears, prompting Ronnie to trigger his connection with Dr. Martin Stein to become Firestorm, the dual hero finds the hyena at the hospital where her therapist works. The plot thickens after a knock-down drag-out fight against the ferocious hyena.

Summer reappears at her parents’ home disoriented, presumably from having reverted to human form after being a bloodthirsty were-beast. But as Summer is led back inside, Ronnie is brutally attacked from behind by…the Hyena? 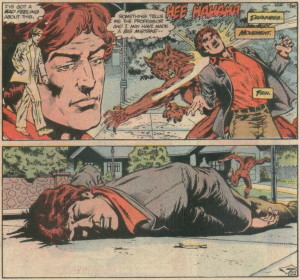 Ronnie’s been gouged by the Hyena’s claws, and the infection has begun. For some reason, each subsequent time he and Dr. Stein combine to become Firestorm, the hyena curse progresses further. Beneath the flaming brow of the nuclear hero, his skin darkens and becomes furry, his nose and mouth begin to blend as a snout. It’s only when they separate that they reclaim their appearance of humanity. They don’t get to stay apart for long, as we soon learn that there is now not one Hyena but two. Summer unintentionally cursed her doctor during her treatment. Wait, things get worse.

Initially after being infected, Firestorm’s control over his powers became sporadic. With the curse progressing rapidly, he’s regained control of his power but is swiftly losing control over his increasing animal rage. The usual tactic of Ronnie to ask for Professor Stein’s input on how to best apply their powers is out the window in favor of savage attacks with slashing claws. Bit by bit, Martin Stein can see and feel Ronnie slipping away into the rage and blind hatred of his unwanted bestial alter ego. Realizing the only way to save him is to separate their personas, Martin urges Ronnie to do so. Only to find that he can’t.

Even after the two Hyenas are subdued and captured, Firestorm is left with a rapidly spreading transformation into a were-beast he cannot stop. Our hero seeks help in Africa, where the curse originated. Before he can seek out the tribal shaman who might reverse his affliction, Firestorm has to get past a corrupt government official and his desire to take out a local warlord. His self-serving “you scratch my back” attitude sickens the superhero, but he does what he must. By the time he’s done destroying the warlord’s ordinance, Firestorm is so far gone that he is little more than a mindless beast. 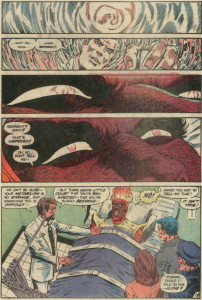 The hero is discovered by the shaman he sought, who trusses up the hero as he attempts to administer the cure. It is hard to say if it is worse for Ronnie or for Prof. Stein. 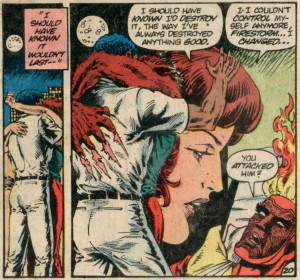 Ronnie has lost all signs of intelligence while the professor is left trapped within to watch helplessly. Just as the cure begins to take effect and Ronnie shows signs of recovery, the warlord attacks, slaughtering dozens of natives. 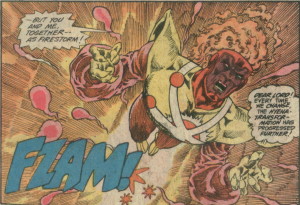 By the time Firestorm is himself again, the healing tribesmen are dead. There is nothing left to do but apprehend the warlord’s soldiers and hand them over to the government leader who thrust Firestorm into the situation to do his dirty work. Even though Firestorm has been a fur-covered beast, seeing the work of the warlord and the politician, he is left to wonder…which of them is the real monster here? 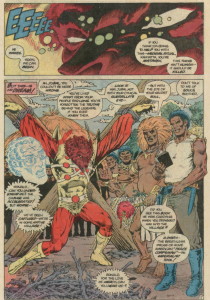 All our stories have dealt with the intrusion of horror. We can see in four-color newsprint fashion what happens when an outside force pushes its way in to take us over and drive our humanity out. It’s fanciful and even fun when between the glossy covers of our favorite comic books, but it can be considerably less so when we let it leak into the real world. It’s all too easy to let the power of something outside ourselves come in and take over. Rage about mistreatment, indignation over injustices, jealousy of those perceived as better-looking, even pride in our identity can seep inside and grow into something far beyond what it was ever meant to be. If we’re not careful, what was once virtuous can become monstrous, and make us lose our humanity, our compassion, patience, and tolerance, before we even realize that we’ve been infected.

Halloween is a great time to dress up, to become something else, to let go a bit and get scared or be scary. Perhaps one of the best parts of the season is that we do get to let go of it all when we’re done. We can pack away the costumes and blow out the jack-o-lanterns and go back to being who we were. Sometimes, it’s a tempting thing to succumb to the monster and carry it with us throughout the year. And sometimes it’s not. It all depends on who you choose to be. As I said before, whether vampire bat or spider lizard, Frankenstein monster or were-hyena, ghoul or ghost, we can become whoever we want on October 31st. I always preferred the superheroes.