There isn’t a reader out there who doesn’t know what it feels like to be out of place. Whether it’s due to our being enthusiastic fans among the disinterested or due to being gay in a mostly-straight setting, it’s not uncommon to feel that we don’t fit in. Conversely, put us in a group of fellow comic book enthusiasts or among friends of the same orientation and we can feel right at home. It’s good to have someplace, as the old theme song goes, where everybody knows your name. We know the names of many superheroes along with their comic titles, and can find comfort and enjoyment in their exploits within those pages. Sometimes even our heroes have to step out of their comfort zone, however. And sometimes they get pushed.

This is October, the month of Halloween, of disguises and scary surprises. This is the time where some things usually seen as out of place make a home for themselves. Carved pumpkins sit on porches as makeshift ghosts dangle from trees in the front yard. But even during this autumn season, there is a place for everything. When scantily-clad teenagers find their way to a secluded camp, we know an axe-wielding lunatic will not be far behind to dice them into cutlets. When the weary traveler wanders the foreign forest path on the first night of the full moon, we can rest assured that a snarling beastie will soon appear to make a tasty midnight snack of him. We are less prepared when such horrific characters make their appearance in settings where they do not belong. Settings like the city of Metropolis. 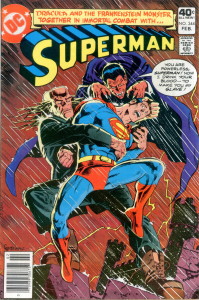 In 1980, two of horror fiction’s most iconic figures did just that. Superman #344, written by Paul Levitz and with crisp, classic art by Curt Swan and Frank Chiaramonte, provided an equally-classic premise. Mild-mannered reporter Clark Kent is sent to yet another assignment that no sane editor would send his most weak-kneed journalist. Clark is to attend a séance at a haunted mansion on the 50th anniversary of a famous mystic’s death. We can already see where this is going. The house is alive with atmosphere and portent as well as one devastatingly beautiful blind medium named Cassandra. During the séance, Cassandra connects with the long-dead mystic, who has apparently been guarding humanity from some evil that has been trying to escape the spirit world. Cassandra’s communication provides just enough of a distraction to allow whatever that undisclosed evil is to burst in upon our world.

Here’s where the wheels come off. With this kind of setup, we are primed for a dramatic appearance by Lord Satanis, Abracadabra, Klarion the Witch Boy, or any other infamous magical DC villain. 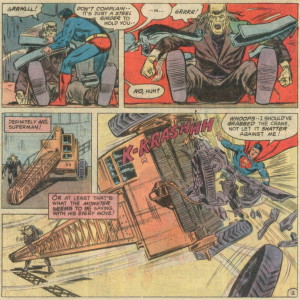 We are completely unprepared when Dracula and Frankenstein’s monster come crashing through the castle windows. Marvel Comics featured their own versions of these celebrated ghouls, but they were unheard of in the DC Universe. 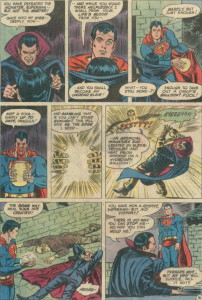 The famous creatures of horror make a beeline for Cassandra, but are met with resistance from Superman. Though vulnerable to the magical powers of the Prince of the Undead, the Man of Steel holds his own well enough to send the two villains running, or as Dracula himself puts it, “It seems you do have some special powers…perhaps even enough to make you a worthy foe!”

The rest of the story is a treat of dodge and chase. Dracula and his piecemeal monster minion want Cassandra dead, as she seems to be the only one who could reopen the portal to the nether world and send them back to whatever prison had held them. Superman…well, he’s Superman. He’s going to protect the damsel and stop the bad guys. Some liberties are taken with the interpretation of the creatures, particularly Frankenstein’s monster, whose strength is increased to 1980’s comic book proportions. The creature bends steel girders, breaks through brick walls, and even hefts a huge crane on a construction site, giving Supes a real run for his money. But the real challenge comes from Dracula, who poses a greater threat more from his ability to plot and scheme than from any of his formidable mystical powers. It’s in meeting that challenge that the Kryptonian champion really shines—literally. Meeting vampiric badassery with contemporary ingenuity, Superman, even while slipping under the hypnotic control of the greatest of the vampires, produces his secret weapon, a toy balloon. Using his heat vision and super-strength, Superman turns the small helium balloon into a miniature sun, effectively blinding the Lord of Darkness. You’re not really supposed to cheer during a Dracula story, but I certainly did here. Superman’s quick thinking blew my 13-year-old mind when I first read this story. 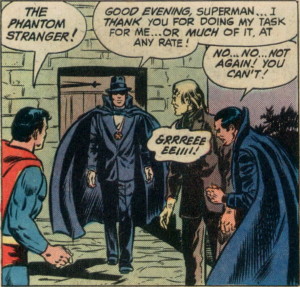 But we’re still at a standoff. The villains will never relent unless they are killed, and Superman would never take a life, even a monstrous one. What next? The decision is taken out of everyone’s hands by the sudden arrival of the Phantom Stranger. We’re given a hint that he and Dracula have met before, as the vampire cries out, “No…No…Not again! You can’t!”

With a wave of the Stranger’s cape, both monsters are gone. There is no explanation, leaving us to feel that this conclusion is something of a cop-out. Superman is still on our side, expressing our frustration for us, as he angrily confronts the Stranger. “They’re gone?–Just like that?” They are. Even if the ending is a bit unsatisfying, it cannot undo the thrills and fun of the pages which preceded it. As for a truly stunning climax, that comes in our next adventure.

Let’s jump ahead just two years to 1982 and a story that spans three months and five issues of Batman and Detective Comics. It takes all the talents of writers Gerry Conway and Paul Levitz and the amazing artistic skills of Gene Colan, Alfredo Alcala, Tony DeZuniga, Don Newton, and Bruce Patterson to tell the tale. Long before the days of the acclaimed Batman: Red Rain or anyone had even heard of offshoots like Elseworlds, the Dark Knight Detective became cursed as a vampire. Follow: 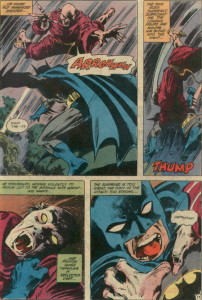 The bone-chilling story begins in Batman #349, when the then-still-young Dick Grayson has fallen under the sway of lovely yet eerie lady Dala. Double-crossed and captured by his new love interest, the Boy Wonder makes his escape from her trap only to be set upon by Dala and her master, both revealed in true form as ravenous vampires. Robin fights them off, yet for all his resourcefulness, Dick does not get away unscathed. Bitten, drained, racing blindly into the rain, Robin is intercepted by a new character, one Father Green. The good man of the cloth not only recognizes Batman’s partner, but is apparently well-versed in all matters pertaining to undead blood drinkers, or as he refers to them, Vampiri. 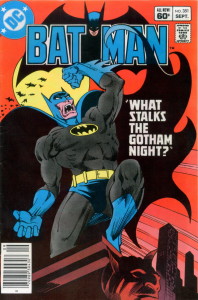 The story continues at a rapid clip, and it is a blessing to the readers that the plot bounces from one monthly bat title to the next, cutting the dreadful month-long wait for the next chapter in half. We hop from Batman #350 to Detective #517, then Batman #351, and finally reach the conclusion in Detective #518. Bruce Wayne, already put off by the odd behavior of his ward, takes it upon himself to investigate further during a function in which Dick follows the haunting Dala around like a man entranced. Changing to Batman, our hero feels ready for anything, or almost anything, save an attack by the snarling vampire who surprises and overpowers him. Now both the Caped Crusader and Boy Wonder have been turned into vampiric monsters with a growing bloodlust. 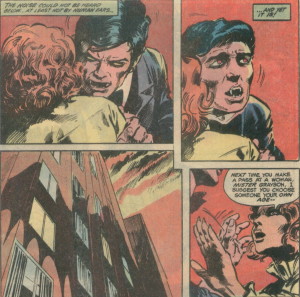 Things deteriorate rapidly for your heroes. Batman staggers home to Wayne Manor horrified by what he has become yet unable to control his more violent urges, which he demonstrates by lashing out at loyal manservant Alfred. Driven back outside by instinct come nightfall, the once noble hero drains the blood of a would-be jewel thief rather than apprehend him. As Batman, now literally more bat than man, looms over the petty crook, we expect him to fight off his new monstrous urges and turn the criminal over to the police. It never happens. “I sent you to jail once, Marley”, Batman laments. “Now I only hope I haven’t sent you to hell.” 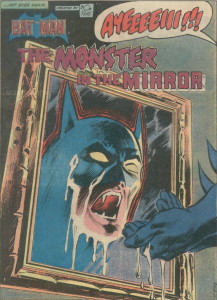 Robin fares little better, using the subterfuge of chivalry to escort Bruce’s love interest Vicki Vale home, only to attempt to sink his teeth into her jugular as a parting goodbye. It is only Batman’s looming presence that restrains Dick’s assault, fearing his mentor would swoop down from the rooftops and tear out his ward’s throat. Batman does swoop down from above, but he administers a beating to subdue rather than kill Dick. 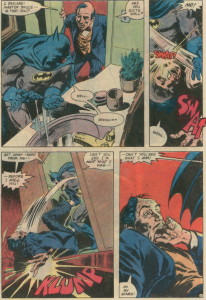 The best of horror stories have multiple layers and this story is a good one. As Batman and Robin battle their curse, Vicki Vale, a capable investigator in her own right, has compiled what she believes is proof positive that Bruce Wayne is Batman. Vicki’s editor, a spineless man under the thumb of crimelord Boss Thorne, is pressured into handing over the information, resulting in a hit being put out on Gotham’s millionaire prince playboy.

For us, that worry is secondary. Batman and Robin are now vampires! We know the legends, and there is no cure for vampirism. A stake through the heart, holy water, and garlic, are the only defense against it, and that results in death. Re-enter the strange and helpful Father Green.

The priest traced the goings-on to Wayne Manor and offers his services to help in a cure. It turns out that while the Dynamic Duo are facing a vampire-like curse with all the classic symptoms, their state as “vampiri” are not quite the same. We’ve already had hints to this, as Batman still cast a reflection after being infected. Father Green has been tracking the original vampire, Dala’s master, for some time and can affect a cure. The question is…can he do so in time? 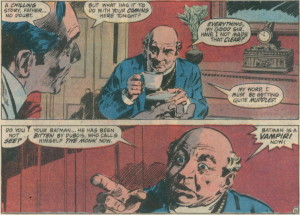 What happens next I am not going to say. To do so would be the equivalent of introducing a friend to the movie The Sixth Sense and prefacing it by spouting the big reveal at its climax. So if it’s Heroic Halloween Horror you’re after, I urge you to seek out this story and devour it for yourself. It has heroes, vampires, mysterious characters, the perfect guest appearance by Christopher Chance the Human Target, and master assassin Deadshot. Rarely will you read a more satisfying conclusion to a nail-biter story. Be warned, the vampires are only the beginning.

As for what’s next for us, be sure to read Part 2 of this article to see where horror intrudes next.