HERE ARE THE NOMINEES FOR THE THIRD ANNUAL PRISM AWARDS FOR EXCELLENCE IN LGBTQ+ COMICS!

PRISM COMICS, THE QUEER COMICS EXPO and the CARTOON ART MUSEUM are excited to announce the Nominees for the THIRD ANNUAL PRISM AWARDS.   The Prism Awards and the Prism Award Honorary Mentions will be presented at COMIC-CON INTERNATIONAL: SAN DIEGO, July 18 – 21, 2019 at the San Diego Convention Center.  The date and time of the Awards Presentation will be announced with the release of Comic-Con’s programming schedule.

The Prism Awards are presented to comic works by queer authors and works that promote the growing body of diverse, powerful, innovative, positive or challenging representations of LGBTQAI+ characters in fiction or nonfiction comics.

The goal of the Awards is to recognize, promote, and celebrate diversity and excellence in the field of queer comics.

The Nominees and Awards are voted on by diverse panels of comics professionals, educators, librarians, journalists

The nominees for the 2019 Prism Awards are:

You Don’t Have To Be Afraid of Me by Victor Martins  https://helloboyfriend.itch.io

see me by e Jackson  https://eshiel.itch.io/seeme

After the Fog by H-P Lehkonen   https://hplehkonen.com/blog/after-the-fog

The Lie and How We Told It by Tommy Parish (Fantagraphics)   http://www.fantagraphics.com/thelie 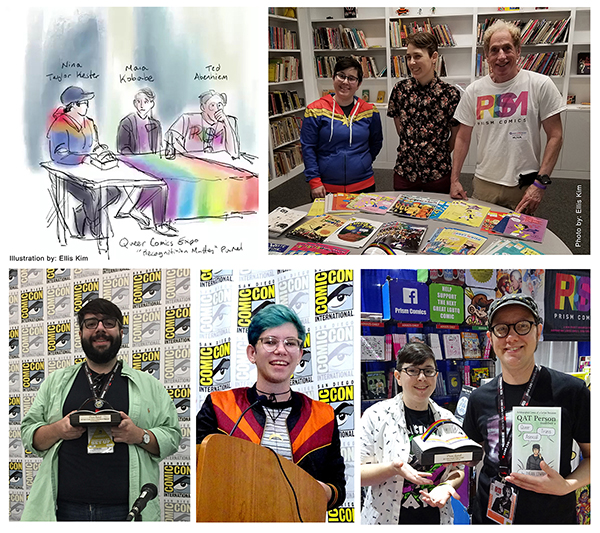 We were honored to work with a talented group of 15 judges who read and evaluated this year’s submissions:

Prism Comics – Founded in 2003, Prism Comics is an all-volunteer non-profit organization that supports LGBTQ+ and LGBTQ+ friendly comics, comics professionals and readers.  Prism fosters diversity in comics and popular geek culture and is one of the only comics organizations that provides an annual financial grant to emerging comics creators – The Prism Comics Queer Press Grant.  Learn more at prismcomics.org.

Queer Comics Expo – The Queer Comics Expo (QCE) is an event to celebrate queer culture and promote diverse queer representation in comics, animation and other great ways to tell stories.  QCE is also a fundraiser for the Cartoon Art Museum, a 501(c)(3) nonprofit dedicated to preserving, documenting, and exhibiting the unique and accessible art form of cartooning in all its forms for over 30 years.  For more information please visit https://www.cartoonart.org/event/2019-qce

The Cartoon Art Museum – The Cartoon Art Museum’s mission is to ignite imaginations and foster the next generation of visual storytellers by celebrating the history of cartoon art, its role in society, and its universal appeal. The museum’s vision is to be the premier destination to experience cartoon art in all its many forms from around the world, and a leader in providing insight into the process of creating it. The Cartoon Art museum can be visited online at cartoonart.org and at its new location 781 Beach St, San Francisco, CA 94109.