The Ultimate Haunted House – Exploring the Corridors of SWAMP THING #45 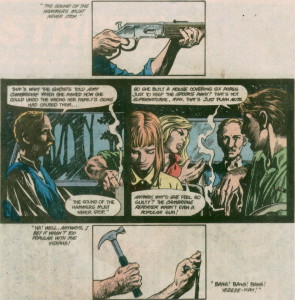 In 1884, Sarah Winchester began construction on an unfinished farm house three miles west of San Jose, California. It would become one of the most famous houses in the history of both architecture and ghost stories. The Winchester Mansion has had tomes written about it, TV specials exploring it, and who knows how many online sites and blogs dedicated to its labyrinthine hallways. 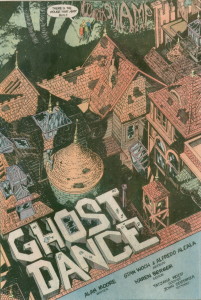 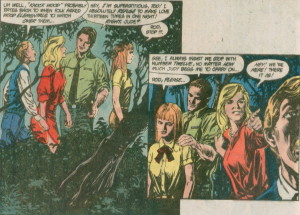 Like the best horror stories, this one begins with the cast. A small group of hapless characters embark on what to them seems to be innocent fun, but is to the audience instantly foreboding. In this case, we have two mismatched couples. The overeducated and timid David is married to the sultry and shrewish Linda. The overbearing sexist Rod has his shy and withdrawn wife Judy. Before we can begin to wonder how these couples ever got together in the first place, they arrive at their destination, the aforementioned haunted house. 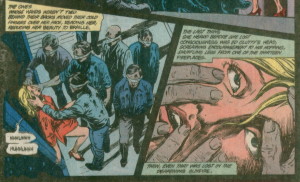 This four-color counterpart to the Winchester House is dubbed the Cambridge House. With talk of its history, it’s winding and confounding corridors, and the obsessed matron who received her construction designs from ghosts, the Cambridge legend is instantly recognizable as the Winchester’s, which is clearly Moore’s intent. Just as Sarah Winchester poured her wealth into 38 years of constructing an architectural abomination to repent for all the lives lost by the famous Winchester rifle, so too did the fictitious Amy Cambridge build with the funds garnered from the dreaded Cambridge Repeater.

Moore’s ability to make a simple phrase unnerving is evident here with his legend “The hammers must never stop.” At the insistence of stern spirits, Amy Cambridge had to keep the hammers of her builders pounding even as the hammers of the Cambridge gun fired bullets from its chamber time and again. 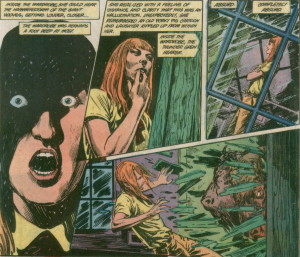 The house itself, chillingly brought to life on the page by the skilled hands of Steven Woch and Alfredo Alcala, is a twisted reflection of the original. Unlike the pristine and well-maintained Winchester Mansion, the Cambridge House is in shambles of rot and decay, practically beckoning the daring (or the foolish) to come inside. Of course, they do. Or rather, the oversexed Linda and Rod do, eager to have a steamy adventure someplace that common sense screams for them to steer clear of. Even as we shout at the silent page for David and Judy to turn tail and depart without them, living out their lives as the far-better matched couple, they follow along inside.

That’s when the wheels come off. Unlike the real-life counterpart which only speaks of ghosts in quiet whispers, the Cambridge House has them in abundance, all-too real and all-too solid. The quartet is easily separated by the baffling interior, each one to face their respective horrors alone. The innumerable victims of the Cambridge gun crawl out of every corner, and emerge from every dark hallway. Victims of murder, angry gunfights, even hunted animals all usher forth from the dank and shadowy rooms. The four explorers find new peril each way they turn, with slaughtered Indians and undead cowboys blocking every exit.

Those things that appear to be impossible illusions, such as a bison stampede inside a standing wardrobe, prove to be frighteningly real and bring crushing death to anyone unwilling to believe and step aside. We expect each one of the quartet to die hideously in turn. Except they don’t. At least not all of them.

Also as in the best of horror stories, a savior appears when all seems lost. The Swamp Thing, drawn by the supernatural chaos rampant in the dilapidated mansion, arrives to investigate. As a force of nature, the Swamp Thing assumes his role as the earth’s Plant Elemental and literally knocks wood to rid the house of its haunters. He rescues one of the only two survivors and carries outside her to safety.

That should be the end of it, you would think, but once again as in the best of horror stories, it’s not. There is one last fright to be revealed, and it leaves the poor, befuddled Rod shaken to his core. Worse, it sends him over the edge and prompts him to purchase his own Cambridge rifle, the purpose for which we can envision all too readily.

Into the haunted house went a chauvinistic adulterer, a sly and self-obsessed vixen, a spineless weakling, and a clueless fool. By the story’s end, one of the two who survived was soon to become a monster. It may seem that I have given away everything in this story, but I assure you I have not. The story must be read through to absorb and appreciate every chilling word, every haunting image, and its unnerving finale. Like the haunted mansion revealed on the comic’s 4th page, this issue beckons you to come inside its pages and explore.

You should also go inside the website of the infamous Winchester House at winchestermysteryhouse.com, by all means. If you have the fortitude or the gumption, go visit the real house in person. While you’re at it, pick up a copy of Swamp Thing #45 to read along the way. It accomplishes something we often do not, as does the late Mrs. Winchester herself. Its ghost story, as with all great ghost stories, reminds us that the real terror does not come from specters or spirits of the long dead, but from the living whose infidelity, avarice, and wrath create those specters in the first place. For the real danger in any haunted house…comes from us.

Editors’ Note – We hope you’ll continue to join us all this month for more fun and fright! Thanks for reading! See you next Monday! – PKA