Monsters don’t have to be inhuman. Some of the scariest monsters of all time, ranging from Jack the Ripper to Michael Meyers, come in the flesh-and-blood variety. The silent psychopathic killer Kevin from Sin City: The Hard Goodbye was human, or at least he had the outward appearance of such. Kevin is never given a last name, granting him an almost mythical stature among other horror icons like Freddy or Jason. We never need to add their last names to know who they are and fear what they can do. He never speaks a word, even as his middle-aged body moves with impossible speed and deadly agility, slicing at victims with nails sharpened into formidable claws.

Like the Wendigo, Kevin is a cannibal, something that never fails to make us cringe. Unlike the Wendigo, Kevin never roars or cries out his name as he attacks. He has no fur, fangs, or tail, and his apparent humanity makes him all the more chilling. He devours prostitutes, saving their heads to hang as trophies upon his wall. In one of the most disturbing aspects of Kevin’s depravity, he makes his next victim watch what he does to her predecessor. She then knows what’s going to happen to her, realizes that she is unable to stop it, and so do we.

Kevin has a patron; a cardinal of the church who not only supports but encourages Kevin’s savagery. The cardinal believes what Kevin himself believes, and that is that when he devours the flesh of his victims, he consumes their souls as well. The cardinal knows this because he is the only one to whom Kevin will speak.

That final truth is perhaps what makes Kevin so fearsome. He is totally silent. He never speaks a word, not while fighting, not while killing, not ever. Nothing is able to prompt a sound from Kevin. He remains silent when he awakens to find that the misshapen antihero Marv has severed his limbs, leaving him a bleeding torso. Kevin remains silent when his mangy, feral dog eats his dismembered trunk while he watches. Kevin never even screams when the brutish Marv uses a hack saw to decapitate the cannibalistic killer while he is wide awake. He never utters a sound.

Kevin’s stay in the comics pages was not a lengthy one. Kevin is dead. But the sheer, gut-wrenching horror he inspired lives on. Like so many monsters, he never really dies. 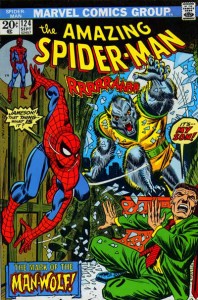 On the opposite side of the spectrum from Kevin are heroes who unwittingly become monsters and fight to never give in to what they’ve become. There we will find the Man-Wolf. Colonel John Jameson, heroic astronaut and son of J. Jonah Jameson, the cantankerous newspaper publisher who so despises Spider-man, is the bearer of the werewolf curse, although this curse has a twist. Colonel Jameson makes a keepsake necklace out of a stone he brought back from his trip to the moon (no doubt thanks to a massive gap in NASA’s security and quarantine procedures), and when the light of the full moon strikes the necklace, John Jameson becomes the snarling beast that is the Man-Wolf. 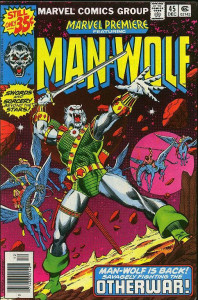 The story seems straightforward enough, but it has twists and turns no reader could easily anticipate. First, the strange moonstone has grafted itself to John Jameson’s throat, making it next to impossible to remove. It takes the strength of Spider-man to tear it from the Man-Wolf’s throat and reverse the monstrous change, taking a good chunk of the lycanthrope’s flesh with it. The story would seem to be over then, but for the intervention of others. Morbius returns the moonstone to Jameson’s neck, bringing back the form of the Man-Wolf. As the Man-Wolf continues his own adventures solo, we find that he is sought by heroic hunters like the too-cool Simon Stroud, and an otherworldly band of heroes who want him for their own purposes. We learn that ripping the stone from the Man-Wolf’s throat is no longer an option, as the stone has woven roots throughout Jameson’s entire body, making it literally a part of him. But hold tight, it gets better.

John Jameson finds himself back in space, then back on the moon, and back in the form of the ferocious Man-Wolf. But after passing through a portal there, his mind is returned to him and he finds that the gem on his neck, previously referred to as a moonstone and a weirdstone, is actually a Godstone. The Man-Wolf is heir to the power and title of Stargod, a demigod to an entire people on a distant realm called Otherworld. Rousing adventure ensues as he joins forces with rebels of this sword-and-sorcery world to roust a lunatic known as Arsien Tyrk. During this thrilling saga, Man-Wolf taps into the true power of the Godstone for the first time and unleashes a fury on a near-cosmic scale, disintegrating swords and sending villainous hordes flying with a thought. If we feared the Man-Wolf before, we’re cheering him now.

The rest of the Man-Wolf’s history is scattered and varied. He comes back to earth and battles Spider-man as the snarling white werewolf, then encounters the She-Hulk as Stargod, then returns to face Spider-man again as a mindless monster while Curt Connors works to cure him. Eventually, John Jameson and the Man-Wolf/Stargod entity become one, with the power his to command. Where his story will end is anyone’s guess. 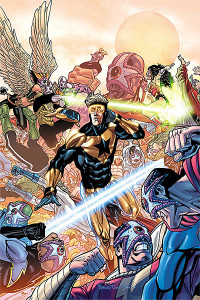 Let me summarize this entry with five words. Invasion of the Body Snatchers. Starro the giant starfish-shaped interstellar conqueror may appear absurd on the outside, but he is not to be taken lightly. He’s been wreaking havoc and giving us the shivers ever since he first tackled the Justice League decades ago. Starro covers the planet he seeks to conquer with miniature versions of himself. The starfish extensions of the massive entity latch onto the faces of their victims and take control of their bodies and minds. One by one, every person; be they man, woman, child, or superhero, falls prey to the Star Conqueror and becomes one of its minions. 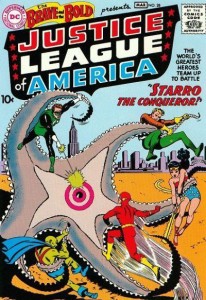 It may be argued that the image of superheroes and citizens on the street walking around with big one-eyed purple starfish on their faces looks more silly than scary. I disagree. While those in other books or movies who have been replaced by pod people or are being controlled by some sorcerous Svengali may look just like you or me on the outside, making them that much harder to defend against, Starro’s minions can be spotted from blocks away. That is what makes them so frightening. They move onward, unable to resist the control of their new master, interested only in doing his bidding and increasing their ranks. It doesn’t matter if your eyes can shoot laser beams or your arms can crush boulders. Once that starfish is attached to your noggin, no power on earth can make you want to take it off.

I’ve heard it argued that the same terrifying effect can be achieved with any zombie story. While it’s true that shambling zombies are easy to spot and they too can move forward in unrelenting throngs, Starro’s slaves have one thing that your average zombies do not. They have purpose. Beyond basic hunger, Starro’s thralls move at his command and obey his will above all else. His starfish are unbiased in whom they claim. Be it the man who uses the corner phone booth to call home or to change into tights and cape, no one is safe from the overwhelming singular hive mind from outer space. As those around us fall one by one to its onslaught, you cannot escape a single thought. You’re next. 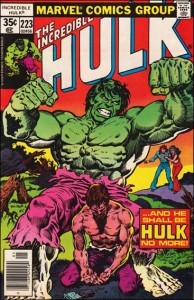 Don’t even pretend that you’re surprised by this. Any list of the greatest comic book monsters has to be topped by the Incredible Hulk. We all know the story, although it’s been told many times in many different ways, it always boils down to the same classic narrative. Brilliant scientist Bruce Banner is overexposed to massive doses of gamma radiation that should kill him, but instead transform him into the raging unstoppable monster known as the Hulk.

The Hulk has changed his appearance and shifted hue. The mind of the scientific genius has at times had complete control of the beast, sometimes only partial control with an ill-mannered brute at the helm, but most of the time he is a simple-minded monster fueled by rage.

While some things shift and change with new stories and new storytellers, the majority of the aspects that make the Hulk the greatest of all comic book monsters remain the same. The Hulk has within his legend aspects from some of the most memorable monster stories ever told. He’s the diametrically opposed dual identity of Dr. Jekyll and Mr. Hyde. He’s the fearsome monster unleashed by the ambitious scientist who was Frankenstein. He’s the timid hero who dreads his transformation into a mindless beast as was the Wolfman. Perhaps most of all, he’s the powerful creature alone in the world, hunted and hounded by those who would destroy or control him, not unlike King Kong.

The Hulk is an unstoppable engine of destruction who grows stronger the more he’s enraged, and he’s constantly at odds with those who unleash attacks upon him that do little more than piss him off. We sympathize with the monster as the vast majority of those around him seek his destruction, including the man from whom he emerges. From longtime comic fans to laymen who have never opened a funny book, there are few who do not recognize the cry of “Hulk SMASH!” The Hulk is the strongest one there is, and that goes for this special Halloween monsters list, atop which he stands tall.

And there you have it, the Top 13 Greatest Comic Book Monsters of all time! If your personal favorite monster did not make the list, rest assured that it was either number 14 and just missed the cutoff or it’s quite possible I’d never heard of it and/or just don’t care. I’m too busy hiding under the covers in fear of those monsters that made the list. If you’d care to join me, pick up any one of the comics in which these two-dimensional terrors appeared. Trick or treat! But why choose one or the other? The comic books that hold these monsters offer both.

Editors’ Note – And that concludes this special three part list of The TOP 13 Greatest Comic Book MONSTERS! Hope you all have a wonderful Halloween! Thanks for reading! – PKA