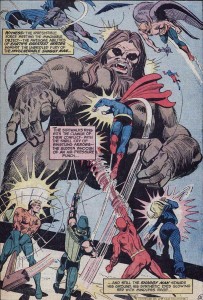 When turning to fellow fans and comic geeks for input to compile this list, I was inundated by the suggestion to include Doomsday. Everyone and his brother seemed eager to put him on the list. Yet I didn’t. For while Doomsday, the bony-skinned creature that killed Superman, is certainly monstrous, I still tend to think of him as more of a super-villain. Besides, there’s another one that came first whom I find scarier. That fur-covered monstrosity is called the Shaggy Man. Scientist  Dr. Zagarian, whom I am more than willing to refer to as mad in this case, created the Shaggy Man by splicing his source material with genetic material taken from a salamander, and thus accidentally created an artificial life-form that could rapidly heal from any damage done to it. Unlike the cute little salamander, the Shaggy Man is a violent, mindless thing of enormous power and size that will attack anything that moves. The entire Justice League was called in to defeat this monster—and they couldn’t do it. If it wasn’t for an idea by the Flash to create a second Shaggy Man to combat the first one, and to drop them both in a hole to duke it out for all eternity, the Justice League would either still be fighting him or they’d all be dead by now.

Later on, a megalomaniac general transferred his consciousness into the Shaggy Man, but although that made for some great stories, I still find the original monster much more frightening. The contemporary version of Shaggy Man, Doomsday, had a deep-rooted genetic hatred for Kryptonians and thus sought out Superman. The Shaggy Man is not so hampered by any genetic bias. He will simply rage, and fight, and kill, and destroy, until something can stop him. And nothing—mind you, nothing—except for himself, can stop him. Shaggy Man is the creature Doomsday wishes he could be when he grows up.

I’m a grown man and a lifelong comic book fan with many a printed monster to his memory and this particular one still gives me the creeps. Wendigo is a nearly-indestructible, cannibalistic white-furred creature who stands several heads taller than the average man, with a voracious appetite for human flesh. This would be bad enough if not for the fact that in whatever incarnation the Wendigo has appeared, he always starts out as human. That’s right, the mystical curse infects a person who then becomes the monstrous beast, but how the curse takes shape is just as bad as the monster itself. If a man consumes the flesh of another human being while within the Canadian wilderness, the curse takes hold of him and transforms him into the Wendigo. So you have to be in pretty bad shape to begin with before you go white, fanged, and furry.

There have been multiple victims of the Wendigo’s curse, but the one who stands out in my memory is Georges Baptiste, as seen in Uncanny X-Men numbers 139 and 140. Baptiste is the second we know of to take on the curse, and if memory serves me, the sick freak did so deliberately.

Wendigo is fast, strong, and as deadly as they come. He’s fought some extremely tough heroes to a standstill, not the least of which being Wolverine and members of Alpha Flight. His claws are actually fierce enough to penetrate the skin of the Incredible Hulk. I once scoffed a bit at the creature’s tendency to roar out its own name as it launched its fearsome attacks, shouting “Wen-Di-GO!” in a rather dated version of a villain’s cry. Upon reflection, it works well to instill the horror of what we’re facing. With every roar of its name, claws flashing and fangs bared, we are reminded that there is nothing intelligent for us to deal with. It’s all instinct, violence, and hunger. That leaves us with nothing left to do but run, and hope to God we can go faster than the raging thing at our heels.

I admit that I’m bending the rules for this one. In the late 1970s, Berni Wrightson began an impressive series of black-and-white illustrations for the classic horror novel Frankenstein by Mary Wollstonecraft Shelley. In 1983, with an introduction by Stephen King, the celebrated novel was re-released as an oversized hardcover with no less than 43 breathtaking illustrations by the unparalleled Wrightson. Each image was done solely in pen and ink, with astonishing care and miniscule attention to detail. Wrightson’s knowledge of light and shadow, form and fluidity, to say nothing of his grasp of creating truly spine-tingling images on the page, brought the renowned story to life again, making it appear as fresh and new as the day it was first written. It is not possible to look at Wrightson’s drawings and not feel wonder at the landscapes, fascination with the laboratories, and astonishment at the title creature.

Berni Wrightson was able to add new life to the reanimated Frankenstein creation, bringing to it both believability and sympathy, yet with a unique appearance unlike anything we’d ever seen in the movies. We can feel the monster’s rage at his situation and shudder at the obsession of his creator, who ofttimes appears to be more soulless than the monster he stitched together from corpses.

I do realize this entry on the list may be seen as cheating. While an undisputed master of horror comics, Berni Wrightson did not retell the Frankenstein story as a comic book. No one from the Justice League or Alpha Flight appears within Shelly’s pages to confront the Frankenstein monster. But for a time in the mid-eighties, comic shops as well as standard book sellers were abuzz with the arrival of this rediscovered masterpiece, and we were reminded that the extraordinary gifts of the comics artist and those of the classic novelist are not so far apart. And together, they can make history. Or recreate it, by bringing it back from the dead. 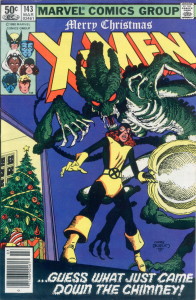 We speak here not of Etrigan, but of the nameless, otherworldly demon that attacked a nearly deserted X-mansion in Uncanny X-Men #143. Ages ago in Uncanny X-Men #96, heroine Storm encountered a legion of diminutive inter-dimensional demons known as the N’Garai. She fought them off and sealed their portal to our world…barely. Jump ahead nearly fifty issues and one of these evil demons returns, bringing with it a hair-raising horror story. The X-men are all out for some much-needed Christmastime R&R, and the only person left in the Westchester mansion is the very young novice X-man, Kitty Pryde.

After devouring a hapless young couple en route, the demon arrives at the mansion and enters through the skylight of Storm’s attic. It chose that way either because it was easiest to break the glass windows or perhaps because it was looking to take revenge on the woman who fought off its predecessors. Either way, Kitty investigates and finds the N’Garai demon waiting for her; a huge, powerful, and frightening thing right out of H. R. Giger’s nightmares. The chase is on and nothing stops this monster. It tears through walls like tissue paper, has insane tracking skills, it moves like lightning, and shreds the Danger Room in seconds. Even Kitty’s phasing ability does little to protect her from the monster’s raking claws, which still cause unbearable agony even when passing through her ghostlike form. The young girl’s final ploy to stop the creature is panicked, desperate, and we honestly don’t know if it will work. At the story’s climax, we’re told as the demon’s gnarled claw comes straight at Kitty’s face, that “she has time to scream”. We join her.

The thing that makes this demon bastard so bed-wetting frightening is not merely that he appears unstoppable and mostly impervious to harm, it’s not that he is always there, around every corner, always directly behind us—it’s that it is pursuing the youngest, weakest, and most inexperienced of the X-Men. It is impossible not to relate to that. Only a bullying jackass would, upon reading a masterful horror story, say of the beast within its pages, “Yeah, I could take him.” The rest of us, the majority of us, empathize with the hero, and cringe, jump, and scream right along with her.

It is interesting to note the impact this monster has had after its remarkably brief comic book appearance. Number of issues in which this demon appeared: 1. Number of years it will take to shake off the chills that appearance inspired: Infinite.

It has long been a Halloween staple to fear aliens from outer space, particularly when they might assume the shape of those around us and replace them. We first became aware of the Skrulls in the sixties, when the alien shapeshifters first confronted the Fantastic Four. While then unable to mimic any hero’s superhuman abilities, their own ability to perfectly mimic anyone’s appearance made them formidable enough. While there have been outer space adventures involving the shape-shifting Skrulls such as their ongoing conflicts against the Kree, the Skrulls are at their best when hiding amongst us and inspiring paranoia. There are few things worse than the creeping suspicion that the otherwise innocuous guy sitting across from you on the bus could at any moment shed his outward appearance to reveal a green-skinned, pointy-eared, swirly-eyed, bumpy-chinned alien of malevolent intent. To make matters worse, as more of their history unfolded, we learned that they had been to earth previously in 1958 to interfere with our world’s space program. This exacerbates the paranoia they provoke by adding the question, “Just how long have they been here?”

The cruelty and deviousness of the Skrulls prompt such distaste among readers that even when comic legend John Byrne unleashed the hunger of Galactus on their throne world, we found it hard to shed a tear. As the Thing once remarked (in FF #250, 1982), “Hey, even Nazis are nicer than you creeps!” 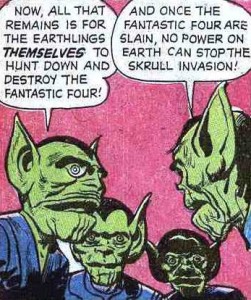 That being said, why aren’t the Skrulls relegated to the category of aliens, like the Dire Wraiths or the Durlans? Why not slip them into the super-villain file, alongside Brainiac or Terminus? Why do I think of the Skrulls as monsters? Because they could be that person right beside you, in line at the grocery store, in the elevator, or at your family dinner table. Skrulls have no compunction about casually killing off those people they choose to replace or anyone who might interfere with their plots of domination. They could take over your town, your country, your planet, and you would never know it unless they wanted you to. They were the first of the evil comic book shape-changers from outer space to give us those kinds of chills on that kind of scale. That, my friend, is monstrous.

Editors’ Note – We’re almost done folks! See you back here tomorrow for the thrilling conclusion of The TOP 13 Greatest Comic Book MONSTERS! Thanks for reading! – PKA