It’s not difficult to find an abundance of monsters in our current times, when our so-called peers walk school hallways tormenting gay teens to the point of suicide, and when those who claim to be in the service of The Almighty declare love for another to be a sin. Rather than dwell on those sources of torment, I thought it’d be better to turn our attention to different kinds of monsters; the cool kind that it’s fun to be scared of. These are the monsters that prowl the pages of our comic books.

There have been plenty of different comic book adaptations and interpretations of classic monsters from movies or literature, to be sure. But I wanted to select monsters that were specifically of comic book origin. I’ve given a lot of thought to this. I turned to friends, geeks, and fellow collectors to create a list of some of the greatest comic book monsters of all time. The list was long and varied. In the end, I had to whittle things down by categorizing which entries really qualified as monsters. Characters like The Thing were the first to go, as they undeniably belonged in the Hero category. They look monstrous but are champions through and through. Next were the Villains, which pulled aliens and creatures from the list like Mongul, Thanos, and Darksied. Some got their own categories, like my longtime favorite Ghost Rider, who was at first a monster, then a hero, then a tormented soul, then two combative beings intertwined, then the Spirit of Vengeance, then a long-lost brother, then a woman, then who the hell knows what. The last type were the old ‘50s and ‘60s monsters like Fin Fang Foom who fell into the “Oh My God You Have Got To Be Kidding Me” category. 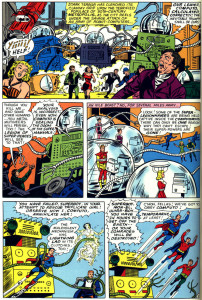 So here it is, my carefully selected and highly biased list of the 13 Greatest Comic Book Monsters. Let the countdown begin:

He’s the tentacled, faceless, unbearably creepy monster god from Hellboy: Seed of Destruction that played a major part in the plan to release the Seven Old Ones onto the earth. As introductions go, it doesn’t get much scarier than that. While the Seven Beasts themselves, called the Ogdu-Jahad, are enough to make us pee our collective pants in anticipation of a Lovecraftian holocaust, and the vile resurrected Nazi conjurer trying to bring it about is far from cuddly himself, there is something about the towering, slimy, unfeeling monster Sadu-Hem that stands well apart. It may be because while the sorcerer can be spoken to, and the Ogdu-Jahad have not yet been released, Sadu-Hem is already present and cannot be bargained with. He has his purpose and will destroy anyone or anything that gets in his way. That’s why he’s our number thirteen. 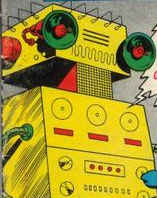 Created with the best of intentions by a genius scientist superhero, it didn’t take long for the creation to turn on his creator. While we’ve seen this storyline more than once with villains like Ultron, Computo has no concern about the one who designed him and brought him to life, has no interest in “family”, and no desire to marry a robotic wife. He is pure computerized monster machine and will easily murder a super heroine in the blink of an eye just to make a point. Computo is remorseless and uncaring, plus he has the ability to upgrade himself. Even the genius of Brainiac 5 couldn’t foresee what was coming and his monstrous machine could beat down the entire Legion of Super-Heroes. With Computo approaching, it would seem there is no help coming. You are on your own. 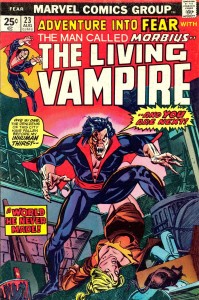 I had determined that vampires in general would be banned from this list, if only to avoid references to mopey teenagers in bad film franchises (see there? I blew it already). But Morbius is no ordinary vampire. For starters, there is nothing supernatural about him. The classic scientist with the best of intentions (see entry #12), Michael Morbius was only in search of a cure for his own rare blood disease. What he got was something far worse. Although Morbius’ new condition came with super strength, the power of flight, and the ability to hypnotize, its main symptom was the vampiric need to consume blood in order to survive. While it’s hard to classify Morbius as a villain, he most definitely is a monster, albeit one of his own making, and a reluctant one at that. In the tradition of great characters like Frankenstein, he’s a monster we feel sorry for. He had dreadful luck in his search for a cure to his original condition, and even when he encounters heroes who might be willing to help, like Spider-man for instance, they tend to be too caught up in their own problems—such as having four extra arms at the time. Never having intended to be evil, he’s feared and reviled all the same. Before long, Morbius fits into the role of monstrous villain regardless how his story began. And while finally having an identity that better fits his piggy-nose look is small consolation, Morbius’ condition does earn him our eleventh slot.

Again, we have heard this story before. A scientist working on a formula that could benefit mankind has his work sought by the wrong people. There is a terrible accident which thrusts scientist, formula, and murky swamp together in a burst of turmoil. Of course, what emerges from the swamp is far from human and of no apparent benefit to anyone. He’s a muck-encrusted, slimy Man-Thing with unblinking eyes and shambling mass of mossy limbs. What makes the Man-Thing unique is that all that he appears to be on the surface is all that he is underneath. This is no divine plant elemental or avatar of the earth. There is no conscious man buried within the horrific exterior, nobly trying to get out and reclaim his humanity. He really is just a terrifying thing, and even if his horrific body could be somehow made human again, there is no mind left to inhabit it. His body secretes a highly-flammable acid which exudes when faced with intense emotions (something you get a lot of when you’re a shambling horror). This prevents even those who sympathize with the Man-Thing from getting close to him. Seeing numerous villains and ne’er-do-wells go up in flames at Man-Things touch is small comfort for a creature who can no longer really be said to feel comfort. He’s mindless, and though he usually ends up helping in matters both earthly and supernatural, he never appears to really know what the hell he’s doing. He’s the saddest of monsters, for even when unwittingly doing good, there is no one willing to congratulate or thank him. We’re just too darn afraid of him.

Editors’ Note – Thanks for reading! We hope everyone is having a great HALLOWEEN weekend so far and that we see you here tomorrow for PART TWO of this awesome, awesome, awesome TOP 13 list! – PKA