The Key To My Heart

You know, today I’m feeling old. No, not just old…OLD!!! That’s right, I’m all the way into full capital letters with several exclamation points! That’s just one step short of “Hand me my walker, sonny, it’s time to go to Denny’s and have something easy to chew”. And why am I feeling old? It’s because I’ve had a part of my long-gone, misspent youth that I had to try and explain to someone…

I’m not sure of the average age of the comic fans out there on the other end of this cyber-tale, but I’m sure that there are a ton of you who are saying “Gold What comics? Is that a Vertigo reboot?” Youngsters! In a nutshell, Gold Key was a comic book line that started out basically as Dell Comics but also reprinted some of their comics as Whitman Comics. Yes, Gold Key suffered from multiple-personality disorder.

A large number of their titles were licensed comics from movies and tv shows, such as Lidsville, the Banana Splits, Tom & Jerry, Bugs Bunny, Buck Rogers and LOTS of other titles. If there was a sitcom, action series or children’s show that had more than three people watching it, then there was a good chance that Gold Key was making at least one issue out of it. A lot of covers were even pictures from the stars of the show themselves. Each issue would have two or three stories, with no real continuity to them at all. Yes, that’s right. The man who tries to figure out where KISS’s appearance in Howard the Duck fits in with the main Marvel Universe loves a comic line with no continuity at all. No continuity. No crossovers. No multiple covers.

Besides presenting new stories to sitcoms and Saturday morning shows, Gold Key also had some fun horror and science fiction titles that graced their pages. Ripley’s Believe It or Not had several titles which would present unusual stories from all over the globe. Boris Karloff Tales of Mystery had some horror tales with Boris Karloff as the storytelling host, presenting short stories that were just short of EC Comics in that they presented characters who’s personalities were black and white…Good people survived, bad people got punished. They also had a comic called Space Family Robinson, which predated Lost In Space by a year or so. Not every issue of these titles was a classic, but they always entertained on one level or another. 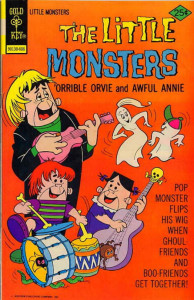 Along with adaptations, Gold Key also had some original titles. One was called Little Monsters. That was a family of Frankenstein’s Monsters…Mama, Papa and two kids…who know that they are monsters and loved to scare kids. You know…just like the GOP. There was also OG Whiz, a little boy in his preteens who became the head of a toy company. All of these characters had their villains from time to time, but none of them were truly evil…only mischievous.

Oh, and there are a couple of titles you might have heard of from Gold Key… Doctor Solar and Magnus, Robot Fighter. They got taken from Gold Key and handed over to Valiant Comics, where they developed a new life.

In retrospect, it was probably a good thing that Gold Key isn’t around today. With the way that the world is, I’m sure that we would see OG Whiz having to deal with having to be one of the 1%. And it’s almost a certainty that I would be trying to avoid Jersey Shore comic adaptation! The Little Monsters would probably be running around with razor blades strapped to their hands and carving up little kids.

Yeah, sometimes the past is best there, so it can’t be corrupted. There was an innocence to these comics that can’t be faked, and can’t be recreated. Goodbye, Gold Key. You’ll always live in my memories…and in my back issue bins!