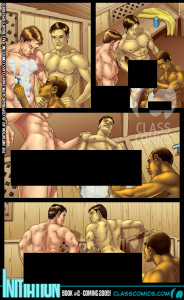 On its merits strictly as a comic, I’m afraid to say that The Initiation completely fails. The art is passable, at best, and is limited to mostly identical looking men with hilarious, obscenely large erections having unprotected group sex without consequence (I’m sorry, I’m getting all judgy without talking about the comic simply as a comic, aren’t I?) I can say, as someone who himself could use a little more gym time, that I did honestly appreciate the presence of the more rotund fraternity pledge in the back of the cop cruiser holding the strategically placed nightstick (let’s just say he had a firm grasp on it… without using his hands.) Also, there’s a nice mix of races, which is something that traditional comics always seem to struggle with, so kudos for that. 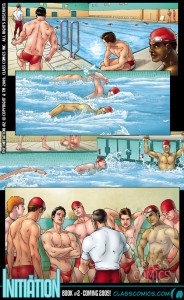 There does require a kind of suspension of disbelief in basically any comic – it’s why we show up to read them in the first place. Erotic comics require a sort of detachment from reality I’m not sure I was prepared for. For instance, I’ve discovered that when men ejaculate in these comics, it has this otherworldly ability to just hang in the air, glistening in a beautiful arc, in mind-boggling volume. There is just Simply. So. Much. Semen. The artist, Joseph Hawk (which incidentally is a fabulous name for an alter-ego if I may say so) must have spent hours studying Las Vegas fountain shows, because the splash-and-drip effects employed are pretty darn impressive.

That’s not to mention the absolute disregard for the human anatomy; but, honestly, isn’t it something we’ve come to expect from comics? If Rob Liefeld can get away with balancing a 56 inch chest on a 28 inch waist with 36 inch quads on top of size 5 (boys) feet, why shouldn’t Joseph Hawk depict ramming a shaft with an eight-inch circumference into a tiny white boy butthole using sunscreen as lube? And why shouldn’t we accept that this all takes place between two full-sized men on an itty-bitty lie-down style tanning bed?

Ok, maybe I am missing the point of the art. It’s fantasy, right? That’s why we can handle the straight-up disregard for safe sex. Class Comics is even wise enough to avail themselves of any responsibility with a disclaimer at the beginning of the book. “Comics are fantasy. In real life, please practice Safe Sex.” See, they even capitalize Safe Sex. Responsibility is a beautiful thing.

Let’s move onto the story, shall we? Now, I myself am a former fraternity member, albeit not the same sort depicted in everyone’s favorite Hot House or Falcon tales, but rather a professional music fraternity. We still pledged, we still did idiotic rituals, and we still drank until we couldn’t feel our faces. One thing we didn’t (as far as I know) do, was make the pledges have public sex and take Polaroids of it. That probably would have driven our numbers up.

I don’t know any fraternity at my undergrad that has a year-round pledging policy, yet the aforementioned tanning bed rendezvous occurs at one character’s summer job, and the book concludes with a “End Of Sophomore Year,” disclaimer. I also don’t know a whole lot of fraternities that have allowances in their budget for matching dog-tail butt plugs but, hey, times may have changed. There’s a character who has somehow managed to get himself on a collegiate swim team without knowing that many male swimmers shave their body hair – but without this, we would have missed a prime opportunity to see him get shaved and sexed up in a sauna with two of his frat buddy teammates. Plot-schmot!

The sauna scene also features a character, Dylan, getting rather roughly penetrated by the fingers of a pledge. Dylan is in an apparently committed relationship with another brother in the fraternity, as evidenced by the second panel in the book when his boyfriend explains, “Yep, it’s OK to fool around, but not to fuck around!” I wasn’t really sure what that was supposed to mean until I got to the sauna-sex (fyi, fooling around clearly equals getting two fingers up your bum by a guy having anal sex next to you in a school sauna), but I was initially pleasantly surprised by the refreshing support for some sort of monogamy directly below a panel featuring thirteen completely naked men inside each others’ various orifices.

Editors’ Note – Thanks for reading this special Saturday post! For more on CLASS COMICS please visit www.classcomics.com. Hope to see you next time for a look at Young X-Men. – PKA