The Girl Who Loved Dragons

For a brief and shining moment, Phyla Vell, daughter of Captain Marvel, donned the Quantum Bands and took on the mantle of Quasar. It was a tumultuous time in the Marvel cosmos. The Annihilation War had ended, and Wendell Vaughn, the sort-of-but-not-quite-original-Quasar was killed in a raid against Annihilus, the big bad bug responsible for the war. Phyla managed to wrest the bands from the bug, wrap them around her wrists, and wield their vast cosmic powers. She even carried a bad-ass sword composed of the hard light quantum particles (whatever that means). 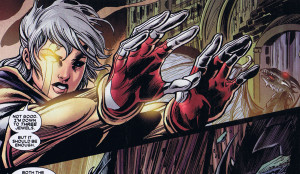 During the war, Phyla also found love. She got moony-eyed over Moondragon, A/K/A Heather Douglas, a former Avenger and future Guardian of the Galaxy (that, kiddies, is a story for another time). After the war, the two hoped to go off together and find peace, but another threat was around the cosmic corner. The robotic despot Ultron conquered the Phalanx and was determined to destroy all life in the universe. It was man against machine, but naturally, the women had to do all the work.

Quasar tapped into the Quantum Bands power and learned of a potential savior who could quell the robotic uprising.

Moondragon, a powerful telepath, could not hear the voices inside Quasar’s head that led her off on her quest, but she trusted her cosmic-powered paramour. To be fair, Heather was having problems of her own. She was suffering from Excedrin-sized headaches, mostly caused by the vicious Dragon of the Moon, the evil entity that Heather vanquished to gain her mental powers, and gain her super-heroic nom de guerre.

Together, Quasar and Moondragon went on a mission to find the alleged savior, but they were being pursued by Ulron’s ally, the Super-Adaptoid, a big green android who could mimic the abilities of Earth’s Mightiest Heroes, the Avengers.

Quasar’s powers were faltering. Even though the gems in the Quantum Bands were losing their light, Quasar still outwitted, out lasted and out played the every adapting android.

But, the old adage, “It’s always darkest before the dawn” proved to be more factional than fictional for the true pink hero (her dad was not a Blue Kree but a Pink one, do try to keep up). In the midst of battle against a phalanx of Phalanx, Heather morphed into an actual dragon! Despite the dramatic change, it didn’t take Quasar long to warm to Heather’s new form.

Phyla looked into her lover’s red glowing eyes and said, “Heather, if I do leave you, it’ll be over something important. Like your annoying tendency to steal all the blankets at night.” She added, “I choose you. You haven’t changed. Not in any way that matters.”

If you ever want to know about unconditional love, give a pep talk to your partner after she’s turned into a fire-breathing, leather-winged monster (I think I met that girl at the Palms in West Hollywood).

Quasar and Moondragon find their savior, Adam Warlock. Instead of galloping away into the sunset, they literally rode off into the heart of a sun where they meet Adam’s maker the High Evolutionary over in the Conquest miniseries where the story continues and concludes. 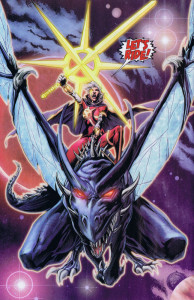 Writer Christos N. Gage and artist Mike Lilly take Quasar and Moondragon on a beautiful journey of love and acceptance in the 2007 miniseries about an oncoming war. In the other Annihilation Conquest series, the writers were constrained by the needs of the grandiose plot. They all had to get their characters from point A to point B, to set up the coming Conquest mini. Quasar’s journey is much more fluid than the others (avoid Wraith at all costs).

In “Annihilation Conquest: Quasar,” issue #1, Heather turns to her partner and says, “Try to understand – – I was groomed from childhood to be a candidate for the role of Celestial Madonna. But the Avenger Mantis was chosen instead. So I foolishly set out to prove they’d made the wrong choice, by finding the ideal mate and bearing the ideal child. Needless to say, it was a disaster. Finally, after years of misery, I stopped trying to fulfill roles others had set up for me. I asked myself what would make me happy. The answer is…you.”

Gage throws all sorts of super-hero tropes into the four issue story; inside, you get Moondragon’s origin, the Priests of Pama, the telepathic plant-people (the Cotati), giant bug-eyed monsters, an old-school super-villain (the Super-Adaptoid), and by the end of issue two…a damsel who becomes a dragon.

At the heart of Gage’s rollicking comic book adventure is an allegory about love. It’s more than physical; real love perseveres against great odds. The author never makes a big deal about the women who love each other, physically and psychically. The word lesbian never appears in any of the four issues. Love is just love. It’s not a political statement; it’s just caring for someone truly, madly, deeply.

Phyla faced her fate a few years later in the “Guardians of the Galaxy.” She died, ironically, at the hands of Adam Warlock, the man she rescued in the eponymous miniseries. Moondragon still mourns for her departed mate. But Heather can take solace in the quantum bands; Wendell Vaughn returned from the grave and reclaimed his title as Quasar, protector of the universe, and Phyla will probably rise again, too. In comics, no one dies forever.

In the meantime, you can take a stroll through the back issue bin and fall in love all over again.

Editors’ Note – Thanks for reading! – PKA