The Grant is awarded annually to help emerging independent queer comic book creators publish and promote their comics.   Since its inception, the Queer Press Grant has fostered many important works representing excellence and diversity in LGBTQAI+ comics: 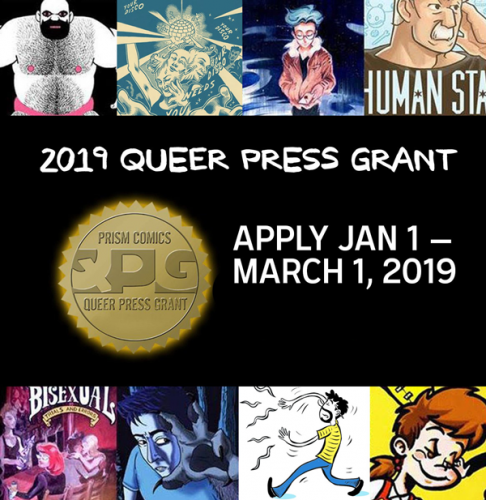 Comic books, comic strips, webcomics and graphic novel projects are all eligible. Entries are judged first and foremost by artistic merit and contributions to the LGBTQAI+ community, followed by evaluation of financial need and proposal presentation.

Submissions for The Queer Press Grant close March 1, 2019 at 5 pm PST.  Entries are judged first and foremost by artistic merit, followed by concerns such as financial need, proposal presentation, and the project’s contribution to the LGBT community. The judges also lean towards projects that are more fully realized — we want to see many pages of sequential art, rather than an idea with sketches. The Queer Press Grant is awarded to an amateur artist who hasn’t yet gotten a mainstream publisher.   They are reviewed by the Prism Board, past recipients of the Grant and Prism’s Advisory Board.

The Recipient of the Grant will be announced at one of Prism Comics’ panels at WONDERCON  ANAHEIM – March 29 – March 31, 2019 at the Anaheim Convention Center, Anaheim, California.