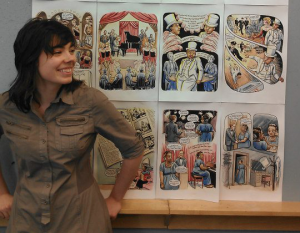 Hazel Newlevant is a cartoonist who grew up in Portland, Oregon and attended the School of Visual Arts.

She’s the creator and publisher of many comics, including the Xeric Award-winning CiVediamo. She has worked for Top Shelf and Dark Horse Comics, and is the co-lead editor of the digital comics magazine INK.

Hazel received the 2013 Queer Press Grant for If This Be Sin, a collection of comics about queer women expressing themselves through music.  Her book tells the stories of Gladys Bentley, the Harlem Renaissance blues singer and drag king, and Wendy and Lisa, the lesbian rockstars of Prince and the Revolution.  If This Be Sin has beautiful artwork and sheds important light on our community’s contribution to the history of music.

Prism Board Member and Queer Press Chair, Jon Macy, interviewed Hazel about If This Be Sin and her work…

JON MACY: Much of your work centers around music history and jazz, what is it about these things that captivates you? How, and how much, do you research? 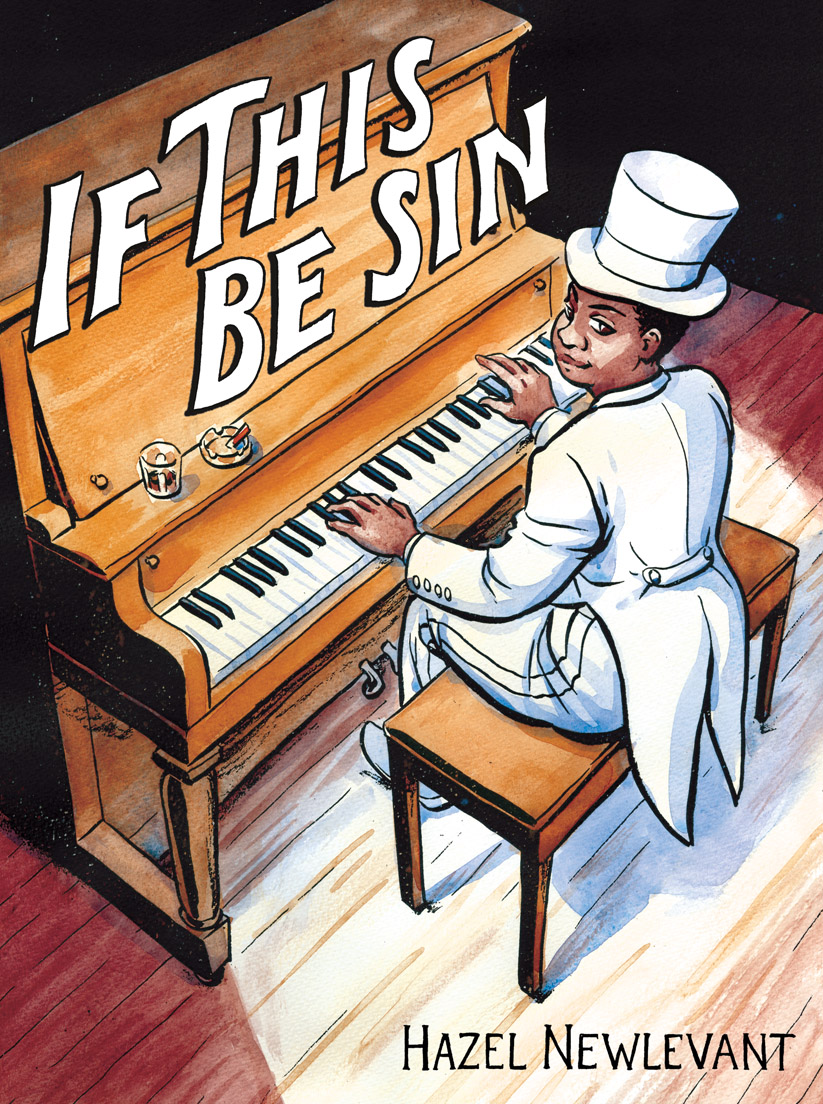 HAZEL NEWLEVANT: What I keep coming back to is that music and dance are such a joy to me, and I want to suffuse my comics with that joy and that potential for emotional expression. I try to pick the subject I’d have the most fun drawing, and go from there. Also, it’s hard to capture sound and motion in a still drawing, so I want to keep trying, and keep experimenting with different techniques. If This Be Sin was actually the first biographical comic I’d done, and the first in a historical setting. It came out of an assignment at SVA to do a comic about a king or queen, so I was looking for a drag king. When I found out about Gladys Bentley, she was just as badass as any hero I could have invented, so I had to do my story about her. I read as much as I could, although there isn’t a whole lot out there. There aren’t any books devoted to Bentley exclusively, but I did encounter her in books about the Harlem Renaissance, queer music history, and female blues singers. My favorite is Bulldaggers, Pansies, and Chocolate Babies by James F. Wilson, which I would recommend to anyone interested in the subject. Queer Music Heritage has an exhaustive collection of photos, press clippings, and other Bentley ephemera, as well as scans of her own writing for Ebony magazine. Aside from that, I looked at books of jazz photography and 1920s fashion illustrations to help visually suggest the period. I’m doing a similar process right now with my story about Wendy and Lisa, the guitarist and keyboard player in The Revolution, which was Prince’s band from the 80s. They also happened to be a couple. I’ve read some biographies of Prince, and looked at interviews they did together. Of course, the real Wendy and Lisa are still around and making music, so I’ve been debating whether I should contact them about the comic. All the events have been reported on elsewhere, but I’ve had to invent some dialog to string things together. It would mean the world to me if this comic got their approval, but I don’t want them to tell me to scrap everything or sue me for libel!

JON: I would love to hear about your process. Can you walk us through the making of a comic?

HAZEL: First, I usually have some parameters to fulfill that will jump-start the idea for a comic. It could be an SVA assignment, an anthology I’m contributing to, a book format I want to try out, whatever. For me, it’s easier to be creative when I’m solving a problem than when everything is wide open, so I’ll seek to put some restriction on myself, and give myself a deadline. From there, I’ll refine my idea by sketching and free-writing, as well as looking at reference materials to get inspired. This is the part where I often get sucked into the internet k-hole.  Once I have a pretty good idea of what I’m doing, I’ll draw a rough version of the comic at print size. So if I’m planning a comic that’s going to fit in a zine, I’ll draw each page on a folded-in-half sheet of office paper. It’s loose but still readable, so I can show it to whoever’s around—teachers, friends, partner, mom—and get their feedback. When I’m satisfied with my roughs, I’ll enlarge them on a photocopier and use a lightbox to transfer them onto a big sheet of bristol. The point is to retain the liveliness and composition of the sketches, while still refining them. The lightbox trick (learned from Jason Little) was a revelation for me; it’s so much easier than redrawing everything! I use an Ames guide to rule out the lettering. Then I get to ink it, which is my favorite part, since most of the tough decisions have been made! I use a small brush or a G-nib, depending on the project, and I do the lettering with an A5 nib. Erase the pencils, scan it, and clean it up in Photoshop. If the comic is going to be in black and white, I stop there. But if it’s going to be watercolored, I print out the inks onto a thin sheet of watercolor paper with a laser printer, paint on that, and scan it and clean it again. Now I’ve drawn all the pages, you think it’s over? It’s not over! I use InDesign to lay the pages out into a booklet, print that out at school or somewhere else that has cheap printing, staple the comic, and sometimes trim the edges. Then I mail it to my distributor, Birdcage Bottom Books, to send to stores, and I sell the comic at conventions. That, or I just slap it up online! 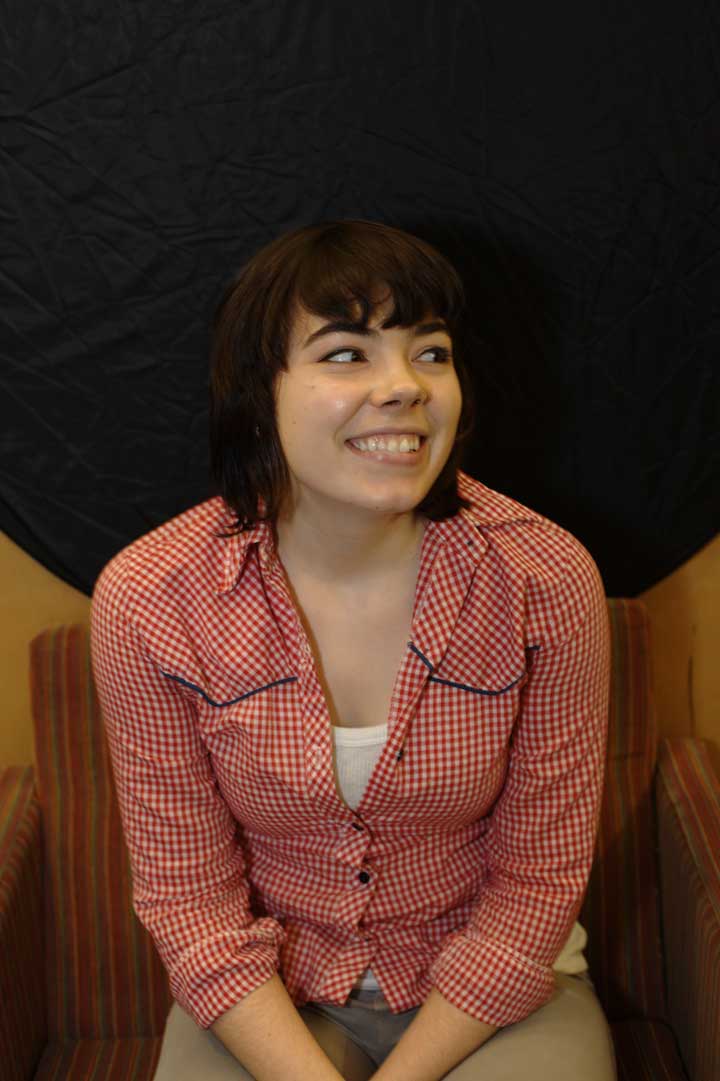 JON: Do you think LGBT comics creators have a role, or an obligation to present works that say something about the queer experience or community? If you could change the world through the impact of your creative work, what would you hope to do?

HAZEL: A role? Absolutely. Especially when queer people are routinely dehumanized in media at large, it’s crucial for us to be able to read comics that speaks to us, and for the straight, cis folks to read comics that helps them empathize with a queer perspective. In an ideal future where queerness carries no stigma at all, these stories would still be important for the diversity and texture they add to the world.  But an obligation? I wouldn’t be so quick to say. I don’t want to pigeonhole the kind of work someone should be doing based their gender or sexuality. My hope is to encourage empathy through my comics. That’s my agenda — empathy for others and empathy for the self. Ideally, someone will look at my work and say, “That person who I thought was just an asshole? Turns out they’re insecure because they’ve gone through some hardships of their own.”

JON: Tell us about your new book and where we can buy it.

HAZEL: My new book is called If This Be Sin, and it’s a collection of comics about queer women and music. I’m trying to explore how music can be a vehicle for gender and sexual self-expression, and those are subjects that fascinate me. The primary story is about Gladys Bentley, the daring blues singer and drag king from the Harlem Renaissance, and that can currently be downloaded from Gumroad. Right now, I’m working on the final piece of the collection, a new story about Wendy and Lisa, and then the whole thing will be done! I’m planning to debut it at the Toronto Comic Arts Festival, which is “oh shit, so incredibly soon!” in cartoonist time. I’m excited to get this book out into the world!