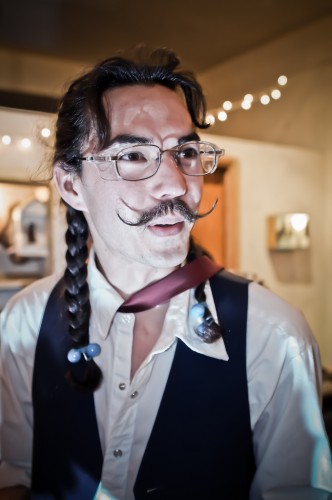 JON: Are there any restraints to web comics in content or format, and are print comics really dead?

DAX: At the moment I’m getting really knocked around by mobile devices. Most of my views are on devices, but I originally conceived of Failing Sky as a desktop experience and I’m not adapting too well to the small browser thing. Even though the interface is built around click-and-drag, which is more fluid on devices, the story doesn’t really work well on tiny screens (if the latest mobile browser isn’t doing unpredictable things to my interface to begin with!). Failing Sky is also a novel, so it’s not something that fits the pace of mobile viewing either. But for those people who are reading in weekend binges on huge desktop screens, I still do love composing for the infinite canvas of browsers. I also launched a web strip this year (strip.villainette.com), so that I’ll have at least one thing that’s easily readable on devices.

And I think print comics are doing really well! I have a few musician friends who have been experimenting with visual/written artwork (me included, I guess), just because print publishing is such a better business lately than recordings. Paper books are satisfying and will always have a niche I think. I’ve actually been working more with print comics this year, even though I feel like I’m shut in a trunk when it comes to panel arrangements and story flow.

JON: Failing Sky is remarkable not only for it’s experimentation in panel arrangement, and stunning art, but for the powerful way it handles trans characters. What kind of feedback and fan mail are you getting? How personal is this story?

DAX: I love that you bring up the trans content, because I worry that I bury it too deeply in the subtext and it just disappears. I mean, I’ve only dropped the T-word once (and I sometimes regret doing it). I’ve been so coy about characters’ genders that I lose track myself sometimes and have to refer to my notes. My main character (Qiao) didn’t tell me she was trans until I started drawing her, and I later found out that she doesn’t even think of herself that way. I still don’t know if two of the primary characters are trans yet and I’m halfway through their stories. I guess I’m often worried that I’m being too overt with the queer themes when this was supposed to be a story about the other parts of queer lives, and then I worry that I’ve overcompensated and the only reason people know that Failing Sky is a trans & genderqueer story is because I tell them it is. 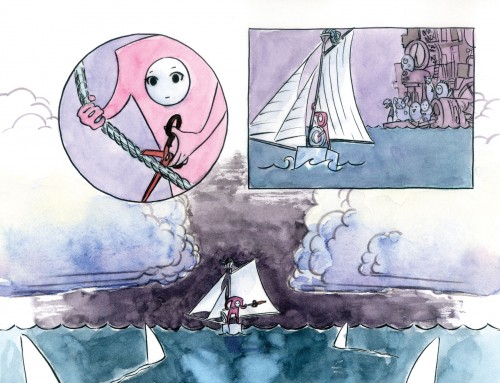 Anyway, I’m so glad you think I treat trans characters well, because I feel like I have no idea what I’m doing. Which is probably telling: I’m trans, but I feel lost when handling trans characters, because I am lost when it comes to myself in real life because I have no role models. I get very little feedback on Failing Sky, and when I do it’s just dodgy things like “this is beautiful” or “this work is important,” which is always nice to hear, but does suggest that my readership is as lost as I am when it comes to the subject matter. I wonder if people are just trying really hard not to say the wrong thing to me, because trans issues are so delicate, but honestly I am just as lost as anyone else.

And I’m not sure yet how personal this story is. I wrote the outline and the ending years ago, but left enough of it open that I can change bits as I go along. The original story was fairly safe — I just took snippets of my & my friends’ experiences as queer artists over the last two decades and mashed them together. As I’ve gotten used to writing, though, I’ve loosened up and tried writing a bit more from the heart, which gets scary, because the story tells me more about me now than I know myself. For instance, when I started Failing Sky I hadn’t ever used the term “trans” to describe myself, and it’s largely because of writing this story that I do now. So, you know, this has been rather life-changing! When I’m writing the Villainette strip, I’m mostly just bitching about things that have happened to me. When I’m writing Failing Sky, I’m writing the stories that are probably going to change my view of myself. So, yeah, Failing Sky is total fiction and the events are not depictions of my life, but it’s probably the most personal story I can tell.

JON: You are an amazing story teller and artist. Thank you for taking the time to talk with me. Your work in comics is superb, and I never use that word. Last question — if you could take over any mainstream comic and do whatever you wanted with it what comic would that be? 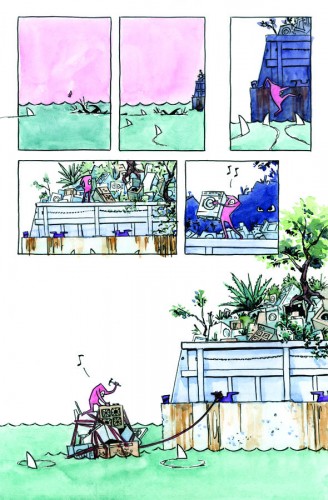 Umm… you sure do save the hard questions for last. I am clueless! I never read comics as a kid and am still struggling to educate myself on contemporary indie titles, much less mainstream ones. I watched the Iron Man movie, but I don’t think comics readers really want to hear about my crush on a trans imagining of Robert Downey Jr…

But honestly, in all seriousness, if mainstream comics are anything like any other mainstream media I’m familiar with, the list of changes I’d want to make is too long to enumerate, much less attempt. The simple answer, for me, would just be to alter the gender of the main character, or to rewrite the story so that they were always trans — and I hear at least one of those things has already happened with Thor, which is amazing. It gets a little more complicated when I consider that every aspect of mainstream stories are built around misogynist assumptions, though, which are unfortunately essential to these titles: what superpowers the heroes have; the concept of superpowers themselves; the worlds that those heroes live in; the structure of stories about heroes; the idea that progress is in expanding the stories of a past generation of people with power (sorry for being an unapologetic feminist). In example, given control of Spiderman, I would first change the character to… I dunno… Spider-person? And then strip them of superpowers to remove their false sense of agency, have them own their angsty teenage past, give them an enthusiasm for history or art or something, split them into 3 characters so that the central story is not about a single person but rather a network of relationships, have the artists make every panel into landscape porn and have the writers weave overly complex social intrigue with intermittent happy endings, and then take the main character’s name off the cover and use something more suggestive of themes rather than a hero. Basically I’d be making an illustrated Jane Austen rather than any re-imagining of Spiderman, so why try?

On the other hand, is the new Jem & the Holograms considered mainstream? I’d want to take that over. Except I wouldn’t change anything about it.

Dax is the creator of Eisner-nominated internet graphic novel Failing Sky. She dabbles in music and puppetry and eats the patriarchy for breakfast. https://failingsky.com