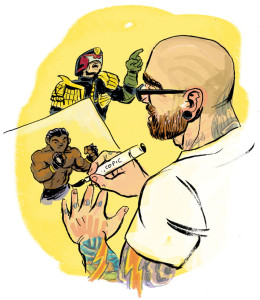 This year’s recipient of the Prism Comics Queer Press Grant is Dave Davenport.   Dave, who is developing his graphic novel Stray Bullet, recounts the adventures of Feral and the Ghost Skater, a werewolf and a spectral skate punk who have strange adventures in the queerer regions of the supernatural.

JON MACY:  What do you think is the origin of your interest in werewolves, and what does it say about gay men?

DAVE DAVENPORT:  I was never really into werewolves or any of the classic “universal” monsters (Dracula, Frankenstein’s monster, the mummy, et al), I guess they were too pedestrian for me. I was more interested in more exotic stuff, like Godzilla, and mythic creatures like the cyclops and gryphon. It wasn’t until I became an adult and started to experience a different side of my self that was primal and sexual, that thought with the animal brain, yet was a separate person from my working day self, often the only gay in a sea of straights. I began to see that as a transformation, and likened it to the duality of Bruce Banner/the Hulk, Dr. Jeykll/Mr. Hyde, or a lycanthrope. 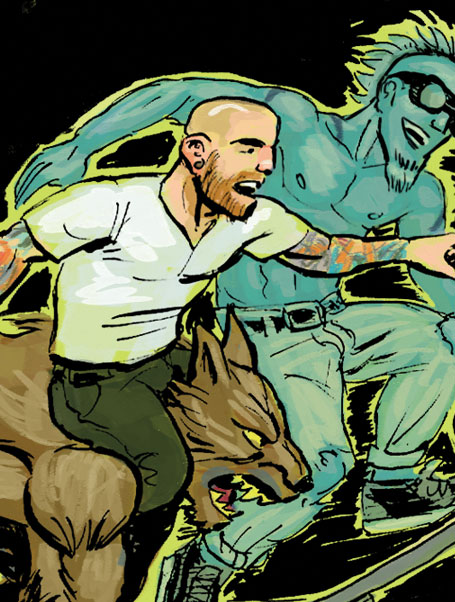 JON:  What was the inspiration for Stray Bullet, and how much is autobiographical?

DAVE:  The obvious answer would be The Experimental Cure by Brad Parker, which appeared in Strip AIDS, USA, but that’s really just part of it. A lot of my inspiration comes from dreams, and work on my own life and relationships. In that sense, it is very autobiographical, and each of the three main characters represent different aspects of my self, and have associated flaws.

JON:  You said you drew inspiration from your dreams, can you elaborate on how that fits into your process, and your process for making comics in general?

DAVE:  Dreams can give a great germ of an idea, and the subconscious mind comes up with some pretty amazing metaphors. Doug’s a-bomb dream was one I had myself when I found out I was HIV positive. I liked how I was able to tell it to people and half of them could tell it was about aids and the other half just thought it was weird. I’m using another dream with Doug, but don’t know where to fit it in… it may have to be just a short bit on it’s own. 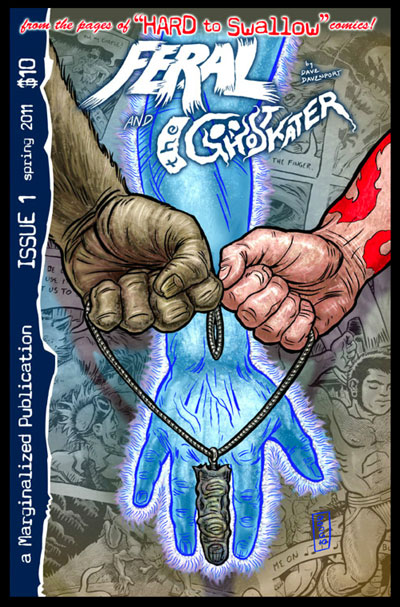 JON:  After the movie deal, and Stray Bullet wins the Pulitzer, what public place or institution would you like to have named after you?

DAVE:  What do I want named after me? That’s the hardest question I’ve ever been asked. There’s so much I’d like to change in the world, so much I’d like to change about myself. I can’t imagine any of it getting funding in this fucked up world. So… how about my dream place? A beach community where it’s always late afternoon, the water’s warm and full of loving people, everyone’s an artist, has a dog, and rides a mountain bike.