The Prism Spotlight mini-interviews continue with Prism Grant Chair Jon Macy talking with the artist known as Bex, whose work will be seen in the upcoming ALPHABET anthology from Stacked Deck Press. 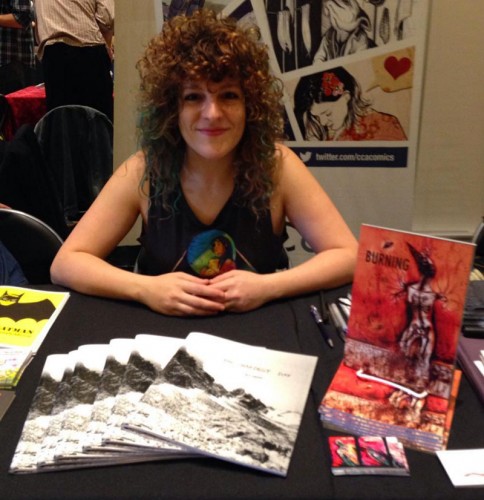 JON MACY: You have a huge range as an artist from cartoonist to painter, will you tell us about your process in a creating a comic -materials you use, and how much is digital?

BEX: For most of my life, I worked as a painter, so I still instinctively call myself that, because painting’s been so deeply integral to who I am, and I’ve only been making comics seriously for about two years now. So a huge part of my comics process still involves painting, but it’s a very different kind of painting, because comics is its own world, with its own languages and natural laws. With the book I’m working on now (Fever Dreams of the City that Never Was) each page begins with the same basic structure–I pencil and draw the panels on a 14×17″ board, then ink everything. After inking is when things start getting more experimental and painterly–I try to treat each panel like a miniature painting, but in black and white, usually with even more ink and white gouache. Intersperse that with bouts of quietly lying facedown on the floor. Comics are brutal. I’ll never bitch about oil painting ever again.

After every ten to fifteen pages or so, I’ll grab everything and go to my friends’ art gallery to scan the boards, because they’re the only place with a scanner big enough to scan a 14×17″ board in one go. All of the coloring is added digitally on my laptop, layered on top of the monochrome art, which I treat like a grisaille underpainting. I’m a fan of digital coloring because the colors you get can be so radiant, like the glow of a stained-glass window with the sun directly shining through it. I do a lot of experimental stuff at this digital stage. One method I like a lot is to paint colorful textures on transparency sheets, then tape the sheets to a sunlit window and take photographs, then use the photographed textures in the final art. I’ll also sometimes use textures scanned from my own film photography. For more surreal sequences, I might make sculptures out of clay or paper and then photograph them, and digitally collage textures on top of them. Happy accidents are a big part of my process, since it can be so unpredictable–makes it more exciting. 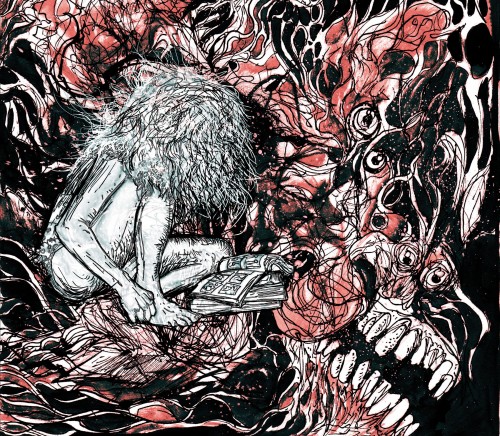 JON: You have shown an intense internal world in your stories, with dreamlike imagery. Where do you draw inspiration from, and what things, people, or activities inform your work? I would especially like to know how much of your real life makes it to your pages.

BEX: When I was a child, I frequently played alone in my room. I had a tabletop forest that I’d created on the top of my chest of drawers. I covered it with green paper, cut out strips and circles of blue paper to represent streams and ponds, and covered every inch of surface with miniature trees, plants, and animals. It was a entire tiny universe unto itself—squirrels in the oak trees, foxes hiding in the ferns, boars in mushroom-laden logs, bears in caves, deer and elephants and hippos and crocodiles and lions—even a unicorn hidden away in a glen with a waterfall. Every single animal had a backstory, and I’d play with my world every day, creating dramatic ongoing stories—there was always a conflict with the greedy Baron and his dragon in their crumbling tower castle across the room, or fighting off an invasion from the Sorcerer-Queen’s army on the bookshelf. That tiny world I’d created felt so real to me as a child, and I attribute it as the seed of my lifelong penchant for world building.

That seems to have bled over to my dreams as well—my dreams have also long been a source of ideas. This seems very appropriate, since Neil Gaiman’s Sandman completely transformed my conception of what a comic book could be. In my dreams, there always seems to be an emphasis on environment rather than people, which has resulted in a sort of immense recurring patchwork of cities and surreal landscapes that I often return to in sleep. Many aspects of my dream-geography have found a place in the real world, within my stories. 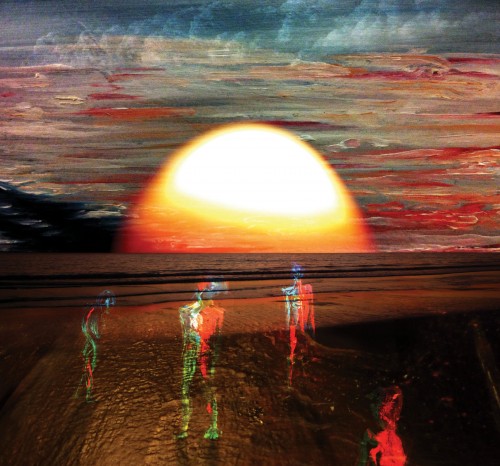 In real life, the thing I draw the most inspiration from is reality itself, particularly in cities and whenever I travel. Backpacking has a way of stripping you down. It makes you like an exposed nerve, uncomfortable but more porous, and it’s where much of my most surreal imagery can be found. Nothing is weirder or more fantastical than the real, if you keep looking. I write down all of the surreal things that I see or strange situations I find myself in. So in that way, yes, my real life does frequently make it to my pages, like a collage of moments. Following a cat around the narrow alleyways of a medina in Morocco instead of using a map, watching toddlers with a bucket full of eels at a painted floating market under a rumbling train overpass in Bangkok. The feeling of slowly descending into existentialist psychosis after twenty-seven hours on a Laos sleeper bus with interminably cycling rainbow interior lights that never, ever turned off. Cities and dreams both have many things in common, I think.

JON: Bex, thank you so much for taking the time to talk about your work. Last question. If you formed a garage band with two other cartoonists who would they be, and what would you call yourselves?

BEX: Okay, so I don’t know either of them personally, but it would definitely have to be Tom Siddell (Gunnerkrigg Court) and Lauren Monger (Habits). I’d be the drummer. We’d be the Flyblown Clown—mediocre people skills, but the coolest garage graffiti ever.

Bex is a Bay Area-based painter and cartoonist. She has worked as an artist’s assistant and as prop/set fabrication intern for the Emmy award-winning series Robot Chicken. She is currently working on a graphic novel about the psycho-geography of a fictional city. Please check out her work at https://www.bexfreund.com