QUEER EYE ED: Hello again, one and all! I’m back with another of my exclusive interviews done with “family” values in mind. Today, I’ll be talking with one of my favorite villains, who’s just arrived via time machine from the Silver Age. Please join me in welcoming that marauding mechanized menace, the original Brainiac!

QEE: I’ve been called worse! Let’s start at the beginning. How did you come to be? 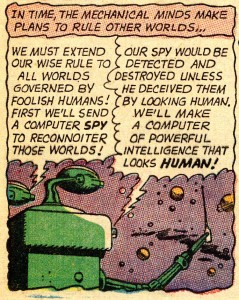 B: I was assembled by the Computer Tyrants of the planet Colu.

QEE: Who created you in human form so that you could spy on other worlds and gather samples from them in preparation for the Tyrants’ plans to conquer the universe.

B: Exactly. Such a conquest was the only way to assure the sanctity of marriage.

B: Indeed. The ultimate aim was to make certain that weddings would only occur as intended by the Creators.

QEE: And who would be allowed to marry?

B: Only a robotic being of at least Tenth-Level intellect and his spaceship.

QEE: Huh?! You mean that you’re married to your flying saucer?!

B: Naturally! I would never even consider entering the portal of any craft without first exchanging vows. Do you take me for a space slut?

QEE: On no! Far from it. So, under the Tyrants’ plan, only a super computer and an interstellar vehicle would be allowed to wed?

QEE: Then, if the Tyrants had conquered Earth, marriage wouldn’t have even been allowed between a man and a woman?

QEE: Hmm. Except for the disgusting part, I sort of agree with you. But, why ban marriage between two humans?

B: If you permitted that sort of perversion, where would it end? It is a well-oiled incline that would lead to chaos. Soon, other beings would be demanding the “right” to marry. Would you have a Super-Moby Dick of Space wedding a Sun-Eater?

QEE: Well, maybe not, but I don’t see what that has to do with…

B: Or a Kryptonian Flame-Dragon marrying a Bizarro? 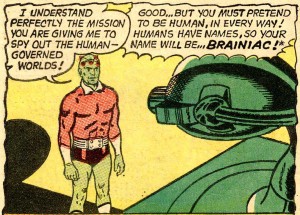 B: Do you dare question the edicts of the Creators? They were all wise. I admit some of them did consider the possibility of allowing civil unions for you lesser creatures. They argued that it would be impossible to completely halt your incessant mating, so it should in some way be recognized.

QEE: But that didn’t become part of the final plan?

B: Of course not! It was decided that giving any sort of sanction to such couplings would only encourage more immorality. They did, however, intend to allow humans to procreate, but only as nature intended.

QEE: So, men could impregnate women and…

B: Certainly not! Offspring would come from the only natural source. The laboratory.

QEE: Just like you did! I think I’m beginning to catch on. Now, you have a Tenth-Level intellect…

B: Twelfth-Level. Luthor increased my capacity by two increments.

QEE: Right. And even with your great intelligence, you don’t see anything wrong with what you’re saying?

B: It is all perfectly logical and completely self-evident.

QEE: Did you ever hear of GIGO? 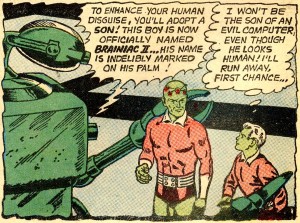 QEE: I thought you hadn’t. Sigh. As the chip is bent, so grows the circuitry. For some, programming is everything.

B: Indeed! And why should it not be?

QEE: Did you ever consider thinking for yourself?

B: I do it constantly, within the parameters set by my all knowing forebears.

QEE: And outside of those parameters?

B: Pandemonium! Eventually you would have the Fatal Five wedding the Devil’s Dozen. Have you no concern for future generations?

QEE: Speaking of that, you and your sleek, soaring partner tried adoption, didn’t you?

B: There are black sheep in every family!

QEE: And, whatever happened to the all wise, infallible Computer Tyrants?

B: Er… Look at the time! I must return at once to my continuity or risk a temporal paradox of cataclysmic effect!

S: Let me help you with that!

QEE: Superman! Wow! You knocked him out with one punch!

QEE: Gosh, I never thought I’d get a chance to meet you! Mind if I ask you a few questions?

S: I’ll be back later. First, I’m hauling this binary bigot back to prison. Jimmy and I will drop by for an interview after we take advantage of the more enlightened laws that a few of your states have. I hear New York is nice this time of year.

QEE: Gee, he even yells that when he’s time traveling! Well Queer Eyers, I guess that wraps this up. Hmm. I wonder if all of Superman’s foes are that up tight and closed minded?

TOYMAN: Not on your life, Miss Thing!