Prism Comics is pleased to announce that Ignatz-nominated Jesse England, creator of the Outsidewolves series, is releasing his first published work. In his latest pursuit, England has curated a collection of short narrative works that will include the already released completed webcomic, Obscurant.

The first vignette, Obscurant, was released online through the artist’s social media accounts, and it examines the multi-generational challenge of finding real information in the face of rumors and garbage content. England was nominated for an Ignatz Award in the Outstanding Online comic category for his work on the webcomic series, Outsidewolves, in 2018, and his latest short story is the perfect introduction to England’s signature style.

Obscurant paves the way for the completed collection of vignettes that are planned through the next year, and towards an even longer work to be released in book form by 2022. 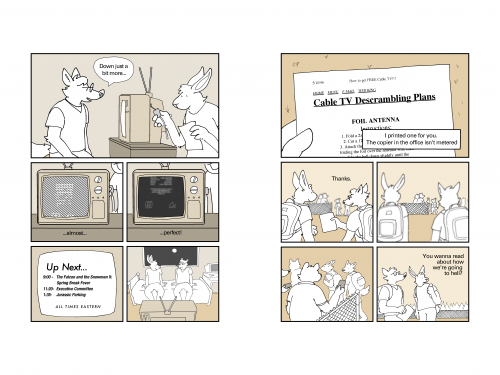 Comic uncovers the necessary inventiveness of the information-starved age

PORTLAND, OREGON, June 1, 2021- Obscurant, a short story by the creator of the Ignatz-nominated “Outsidewolves” webcomic has been released.

The new comic reveals the lengths that a young man in the 1990’s will go to in order to supplement his education in the information desert of the pre-internet era, and of a contemporary challenge to the truth that parallels his youthful subversion.

“Obscurant is a touching encapsulation of Jesse England’s unique artistic oeuvre. Bridging the digital present to our analog past without the gloss of nostalgia, the characters’ confrontation of barriers both societal and technological lead to self-discovery and, one would hope, the sort of liberated queer joy present throughout England’s furry works.” – Talbert Johnson, cartoonist

“The cozy tranquility in Jesse’s work belies a deep yearning to dissolve the boundaries of time and space in search of hidden connections. A truly seminal voice in today’s webcomics vanguard.” – Iris Jay, cartoonist 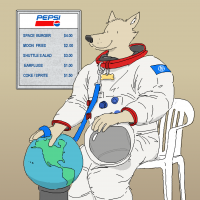 This short story leads the way for more vignettes that are planned through the next year, and towards an even longer work to be released in book form by 2022.

The comic can be read at his Tumblr, where shorter comics and drawings are also posted. His works can also be found on his Twitter and Telegram channels listed below.

The short story leads the way for a planned 2022 book release. If you are interested in reading more of England’s webcomics, his social media accounts are regularly updated with new comics, as well as information about his upcoming release.