Save the Date! An Interview with Marvel’s Daniel Ketchum on Northstar’s Wedding

RBAK:How long has Marvel editorial been moving on this trajectory? It seems, for example, that Kyle’s arc in ALPHA FLIGHT was a (major) bump on the road to this…

Ketchum: We knew we wanted to explore an adult gay relationship when we introduced Kyle in 2009, but we decided to actively pursue this particular story only last year, when gay marriage was legalized in New York state. And a year later, this is still a timely story to tell…and a reasonable next step in their relationship that will open all sorts of new avenues for the couple.

RBAK: Have there been any special considerations along the way in planning this, as compared to any other comics engagement and wedding?

Ketchum: Yes, absolutely! This is a gay marriage story in a mainstream comic book that will be sitting on bookstore shelves next to newspapers and magazines…that also contain stories about gay marriage. Special considerations certainly have to be made. The impetus for pursuing this story was for the Marvel Universe to reflect the status quo in the real world, and we’re taking extra care to carry that through the entire experience. We are presenting multiple perspectives on gay marriage fairly and striving to make Northstar and Kyle’s experiences reflect those of readers in real life: they will come face-to-face with those who support their union, but also those who do not recognize its validity. From start to finish, we’re hoping to tell a story that will ring true beyond the panel borders.

RBAK: The execution of the proposal scene was very interesting and powerful to me, thanks to Marjorie Liu’s knack for just writing super-people as people, paired with Mike Perkins’ ability to take what could be a very static talking-heads sequence and make it visually interesting and powerful. DAKEN and THE STAND seem in some ways like great preparation for this moment.

Ketchum: Marjorie and Mike were wonderful collaborators and they really made this scene something special. Mike drew probably a half-dozen versions of the page where Northstar pops the question; we really wanted to nail it because we knew it would be one for the history books. Senior Editor Nick Lowe and Assistant Editor Jordan D. White even posed for a photo so that Mike could get an idea of how we hoped the page would be staged! In the end, Mike totally delivered and the final sequence as it appears in the book has some power behind it. (And Nick and Jordan will hopefully be sending out their Save the Dates any day now! Haha.) 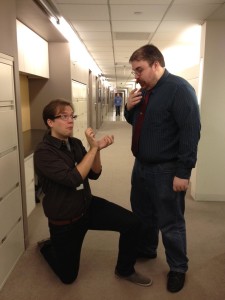 RBAK: X-MEN has, even back to the Stan Lee and Roy Thomas eras but certainly through the Chris Claremont days and beyond, had a grand tradition of “soap opera” — and I mean that mostly in a complimentary sense, keeping the human drama of super-humans front and center. Were there any special consideration of this as an X-MEN story as opposed to any other characters?

Ketchum: It was sort of a happy accident. Thinking over which Marvel gay couple was ready to take the plunge, Northstar and Kyle were the obvious choice. They are two adult men, whose story we had been following for a couple years, through UNCANNY X-MEN, NATION X and ALPHA FLIGHT. We had seen their relationship develop and progress, and this seemed like a natural next step in their progression. While this story might have been a forced step for another pair, it’s an organic one for these two. It was just a nice coincidence that they were members of the X-MEN family, a franchise often praised for its diversity and its “soap opera” qualities.

RBAK: The party’s not over — in fact, the main event hasn’t even begun yet. Are we looking forward to a grand wedding in the tradition of, well, most Marvel weddings going all the way back to Reed and Sue?

Ketchum: What can I say without spoiling anything? How about this: Northstar and Kyle’s wedding is not without a few signature X-Men touches.

Ketchum: Well, we’ve been teasing this story for months, so I’d like to think that President Obama took his cue from us. ::wink!::

But in all seriousness, I think his announcement just underscores how heavily this particular issue weighs on America’s consciousness and how topical a story this really is.

RBAK: For those of us who want to send gifts, where are the grooms registered?

Ketchum: Wherever high-end electronics and fine home furnishings are sold!