Another Comic-Con comes to an end! It goes by in a rush, with me feeling like a salmon swimming upstream. Sometimes I’m able to stand still long enough to Twitter and other times I’m sweating, desperately running from one side of the convention center to another. This time, so much was going on that I couldn’t catch it all, so apologies if I don’t have any pictures of your appearance/signing/panel/party.

It’s a testament to the increasing visibility and interest in LGBTQI comics and creators that I couldn’t cover everything (I may need an assistant!).

Speaking of testament, before starting the day, it’s always good to get a blessing. Thank God for cosplay. 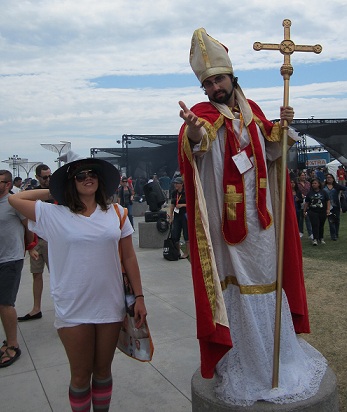 One project that debuted at the Con that did seem to be blessed was the Fantagraphics anthology No Straight Lines: Four Decades of Queer Comics, birthed and edited by our very own Justin Hall. It’s a beautiful book, giving you an amazing rundown of the history of queer comics. Justin was tireless in promoting it, with a panel featuring just a sampling of the creators in the book, signings, an event at Trickster, and basically just about anything he could do to get the word out. And it worked. By Saturday, both Prism and Fantagraphics were running low on copies, and apparently it was selling out online as well. Get your copy now! 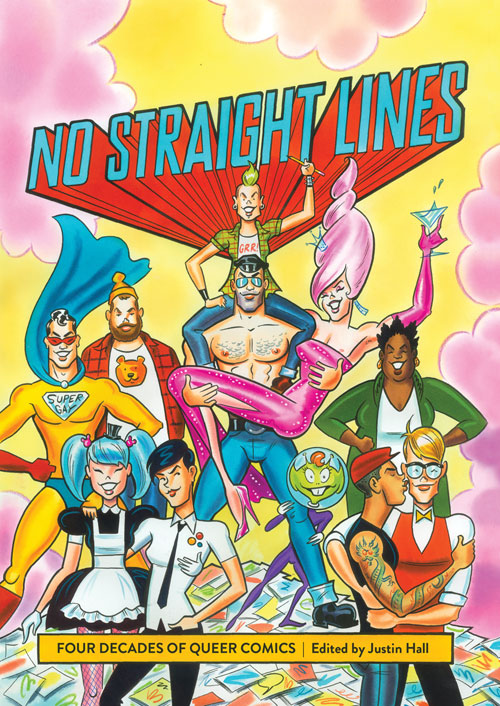 At the Prism booth, we had so many partners and people signing or performing portfolio review that again, I couldn’t catch everyone. But below are the remaining pics I did manage (although somehow Ed Luce escaped me again!).

Indulge me here–one of my favorite things this year was getting a pic with Alison Bechdel. She was nothing but generous and nice to us Prism-ers throughout the Con. 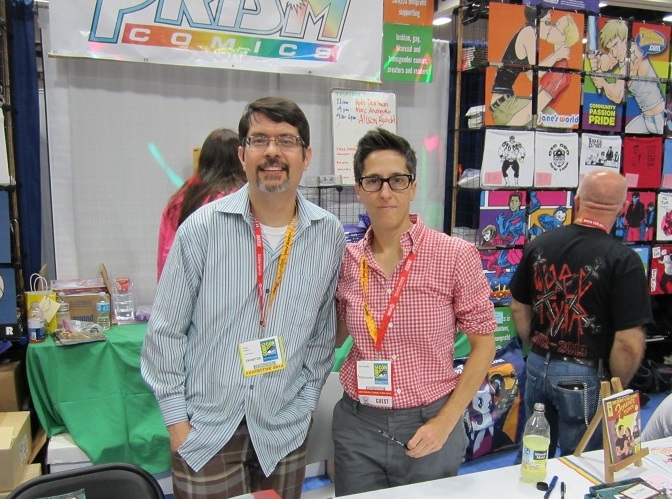 Another doll is Gail Simone, here with So Super Duper‘s Brian Andersen! Gail was signing Charles “Zan” Christensen’s anti-bullying book The Power Within and offering portfolio review and Brian was presenting his spankin’ new collection of Reignbow and Dee-Va (get it–it’s fab!).

And there was Desmond Miller and Ken Gareth Hadley. I love this! Check out Desmond’s book Robinson Crusoe in the 6th Dimension and Ken’s Dangerous Knots and Unknown Knives. 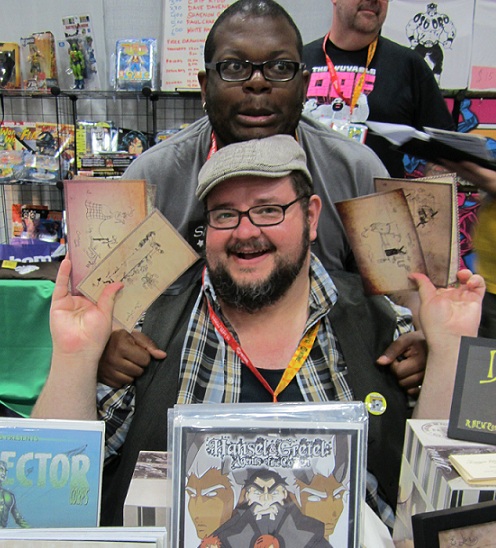 Jon Macy is an extremely talented writer and artist, but he’s also very supportive and encouraging of other creators or aspiring ones. 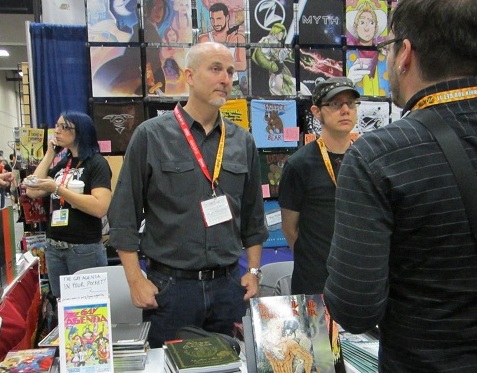 Walter Meyer is a regular who this year, appeared with his gay-themed book Rounding Third. 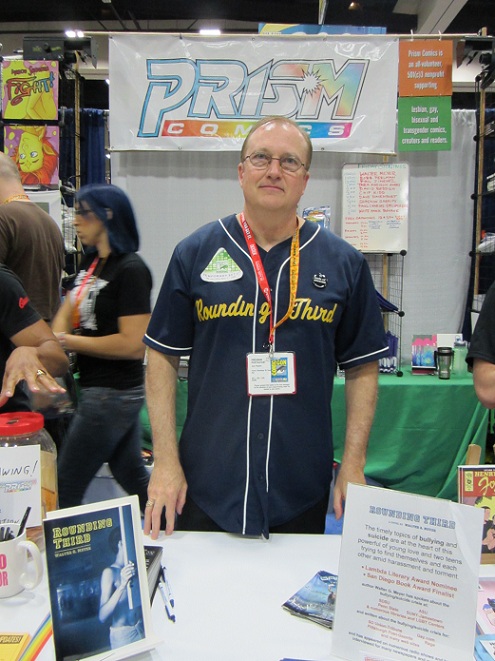 Chip Kidd, already amazingly accomplished with design, editing, and writing, announced at the Con that he would be editing The Passion of Gengoroh Tagame: Bara Master, to much excitement for all fans of this hot and exquisite work. 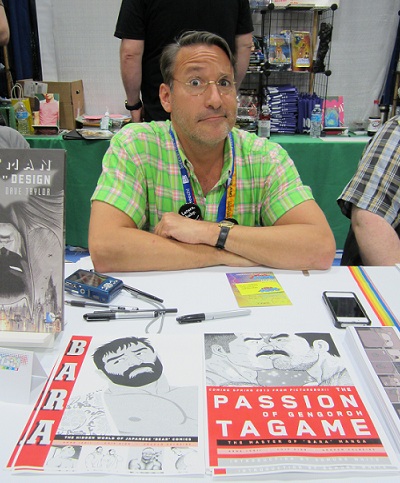 Shaenon Garrity was here with her collection of Skin Horse strips.

And here’s David Reddish who is the author of Sex, Drugs & Superheroes: A Savage Journey into a Wretched Hive of Scum & Supervillainy. 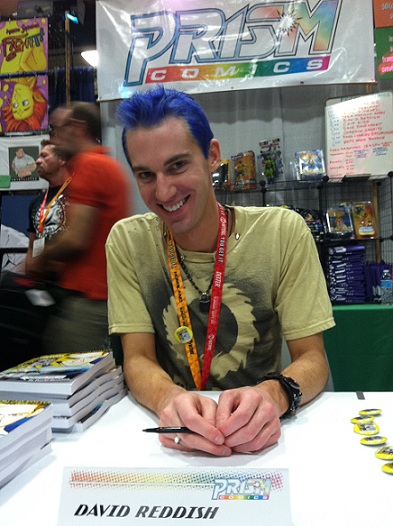 Walking the floor of the convention, I see most of the same companies who entice people with exclusive toys and giveaways, but for someone like me, I’m looking for something novel and different. At Adult Swim, I saw something that reminded me of that great Golden Girls episode with “Grab That Cash”. Here, dressed up willing victims as a rat (or a cat) with one of those cone collars, put them into a chamber where they turned on the air and had to catch floaty things in the collar for prizes Another round in the Humiliation Bowl. 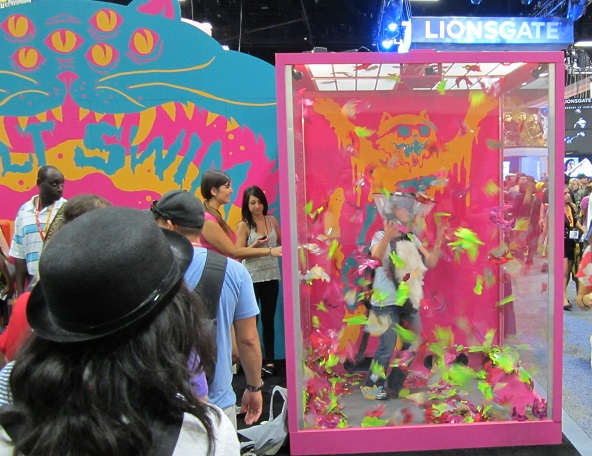 One of the two big events of the day was our Northstar panel, with an all-star group of panelists including David Gabriel (Vice President of Sales, Marvel Comics), Phil Jimenez (New X-Men), Marjorie Liu (Astonishing X-Men), Scott Lobdell (Uncanny X-Men), and Jase Peeples (The Advocate Magazine).

David explained how the top brass of Marvel attended his wedding to his boyfriend, and saw them weeping, so he knew they would be okay with Northstar getting married. For Marjorie, the writer of the wedding issue in Astonishing X-Men), this al came through organically in terms of character and story instead of because of marketing and sales; however, once it was decided, they whiplashed a teaser just before last year’s Con, but thought it was too early. Then they had to keep the whole thing hush-hush until Whoopi Goldberg found out about it and wanted to announce it on The View–the rest is history.

Phil Jimenez said he was happy with the storyline but wondered whether getting prominent gay characters like Northstar and Kevin Keller married off was a way to neuter them. Can the mainstream handle a “promiscuous whore”? It was pointed out that Daken could fit this description, so it’s not like that isn’t represented. Plus Marjorie (pictured below with moderator Chance Whitmire of Fanboys of the Universe) said that being married doesn’t mean the characters suddenly become boring. They’re the same people as before and it’s the challenge for the writer to keep telling interesting stories, bottom line. Great discussion and Chance did an expert job moderating. 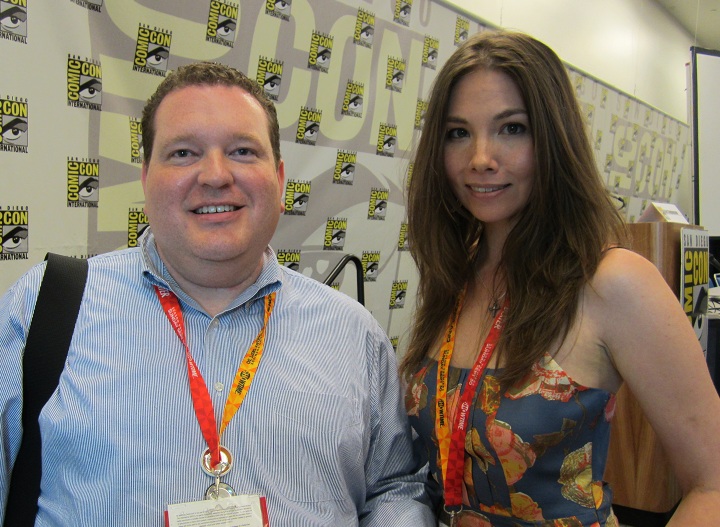 The second big event of the day was Andy Mangels’ 25th anniversary celebration of his “Gays in Comics” panel, the longest running of any panel in Comic-Con’s history. And groundbreaking for the comics industry. Andy promised an extravaganza and delivered.

First, unbeknownst to Andy, he was presented with Comic-Con’s prestigious Inkpot Award. This was much deserved and everyone was clearly very happy for Andy. Congrats!!! 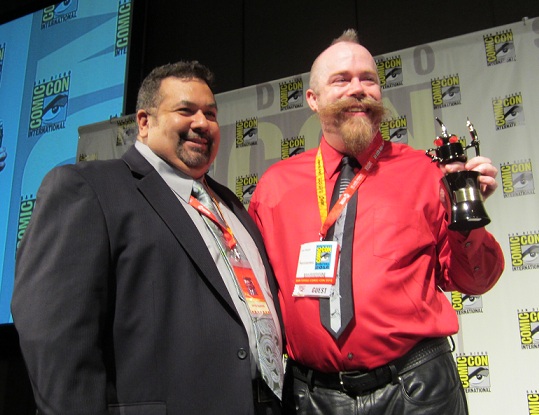 Andy proceeded with the show, where he did a year-by-year rundown of the history of not only the “Gays in Comics” panel but what was happening with gay characters, gay creators and at Comic-Con, with the emergence of the Gay League, Out in Comics, Prism Comics and beyond. For each year, he had at least one speaker come up on stage, plus taped messages (I have the list somewhere, but it’s 3am…).

Here are just some of those who gave funny and heartfelt remarks (and cried in many cases). 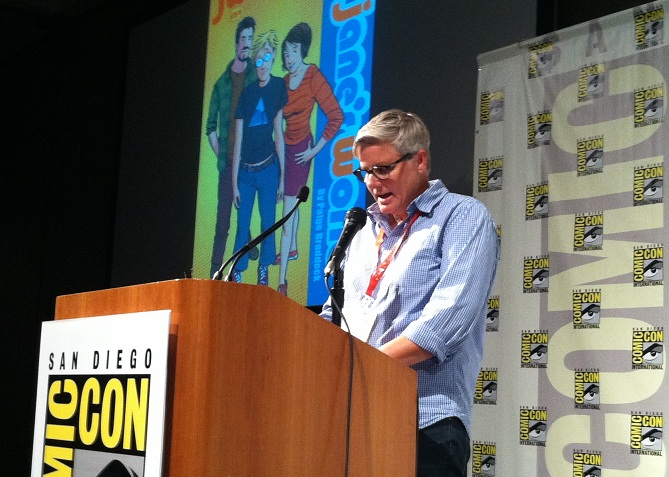 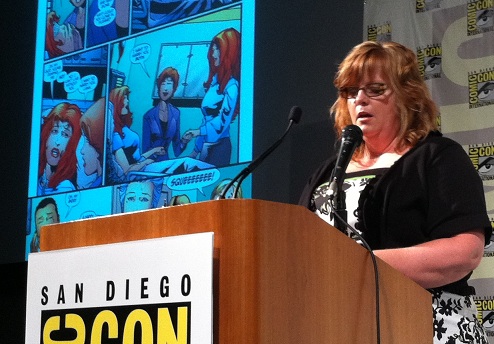 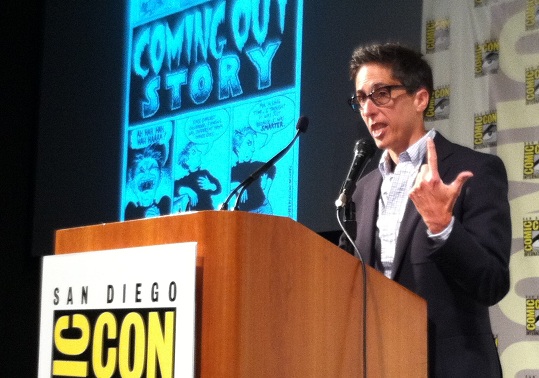 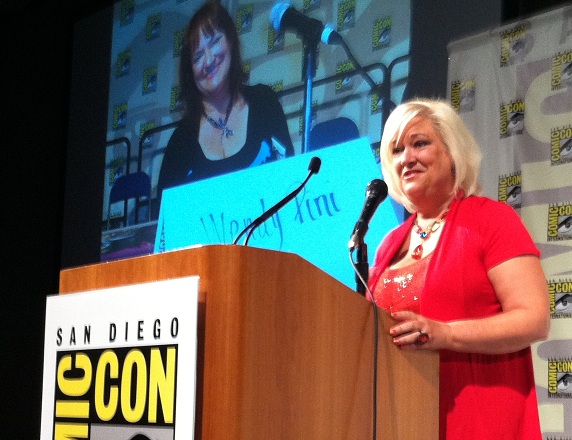 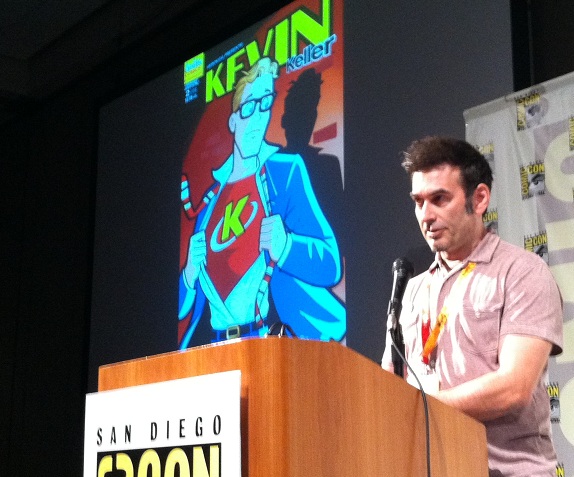 Chip Kidd (who announced he would not cry and told a hilarious story of holding Andy’s magnificent ass): 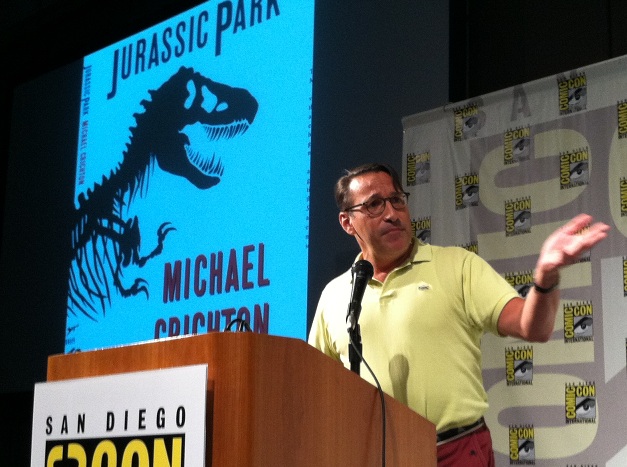 Andy announced this would be his “Gays in Comics” as moderator, but that it would continue with Roger Klorese and a co-host each year, who was revealed to be Paige Braddock for next year.

At the end, Andy had anyone who had ever been on the panel to come up on stage. It was a truly monumental gathering: 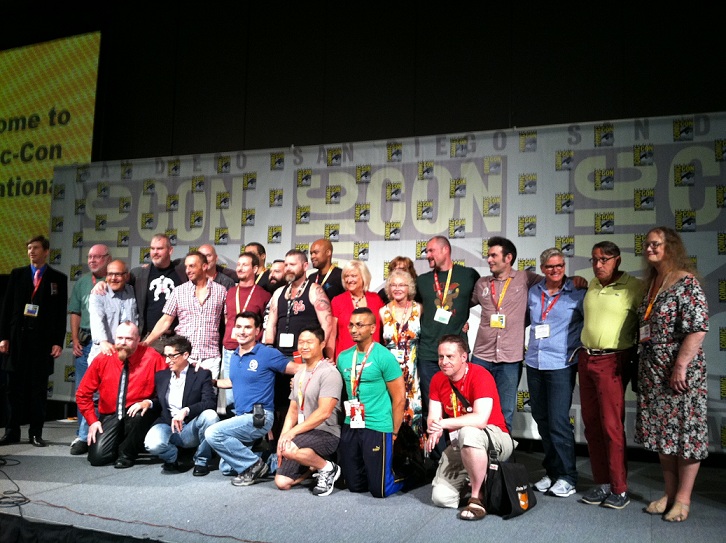 We will miss you as host, Andy, but know you are not going anywhere.

Afterwards, Prism Comics presented their fan mixer with raffle giveaway (of really great comic collections, action figures and more) plus silent auction with items such as an original Alison Bechdel strip, original Dan Parent “Kevin Keller” and much more, all to raise funds for Prism and the Queer Press Grant. 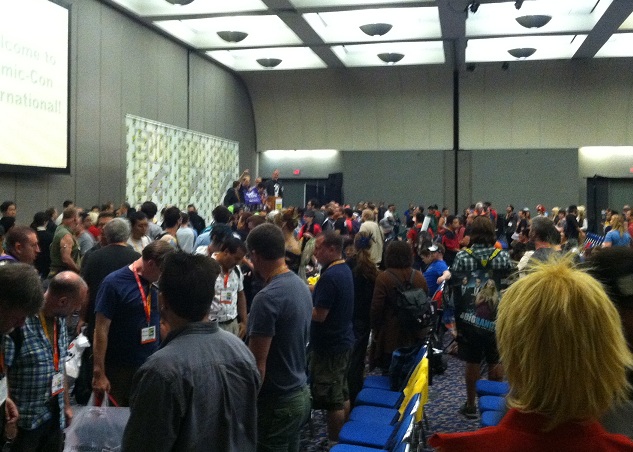 Hats off to everyone at Prism who worked so very hard (our new Prez Ted Abenheim, Justin, David-Paul, JD, Zan, Tara, Roger, Patty, Paige, and many more) and to all the fantastic volunteers (Ben! Geo! Missy! Angie! Ed! and so many others) who made this year such a huge success.

See you next year!