Back at Comic-Con! And gayer than ever. With Alan Scott, Northstar, Tom Cruise, I mean, it’s been a really queer year.

Got here on Wednesday, before the Con was open. Had heard that a fan had died the day before. It was a Twilight fan, but that does not matter and I don’t care what some bitchy people have said. It was very sad.

Inside the hall, it was lots of hydraulics and forklifts and sweaty nerdfolk setting up their booths. Here’s a behind the scenes pic–very rare and CON exclusive limited edition–of the Prism booth before the floodgates. 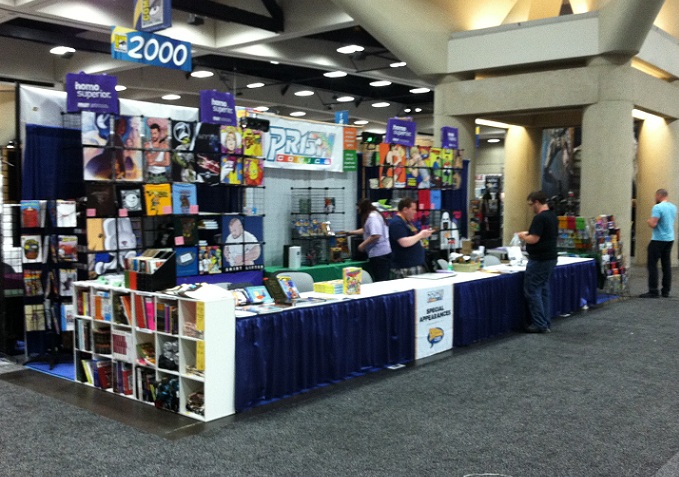 And here’s a shot with everyone outside, pounding to get in. I do realize I’m privileged (!). 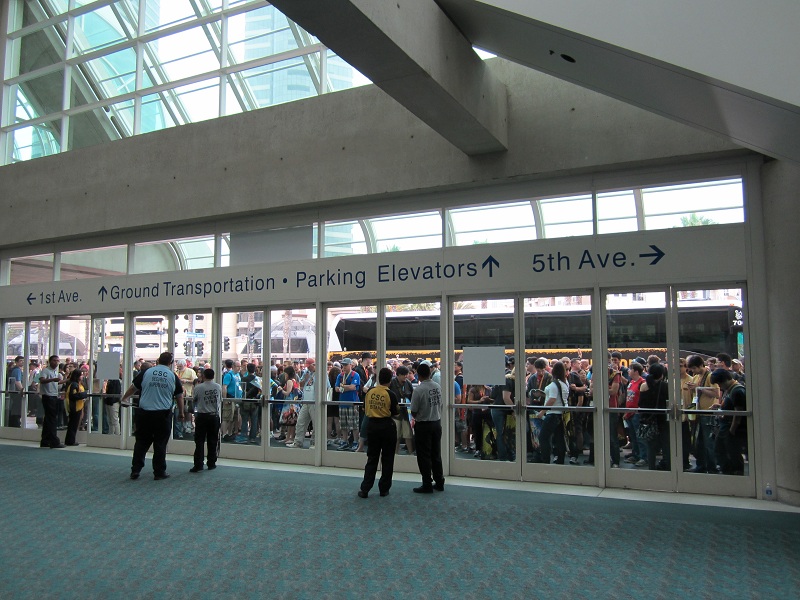 Once open, we had lots of great artists and writers for the public to meet. Here’s a shot from today of Leia Weathington, who is here with her Northwest Press book, Legend of Bold Riley. She’s hilarious, trust me. And she’ll be here all through the Con, as will the other creators featured below. 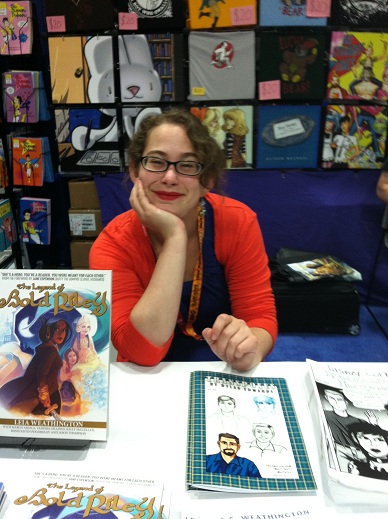 Dylan Edwards, showing his portfolio, who is here with Transposes and is also featured in Justin Hall’s massive anthology No Straight Lines: Four Decades of Queer Comics. He’ll soon be on the Northwest Press roster, so look for his work from them. 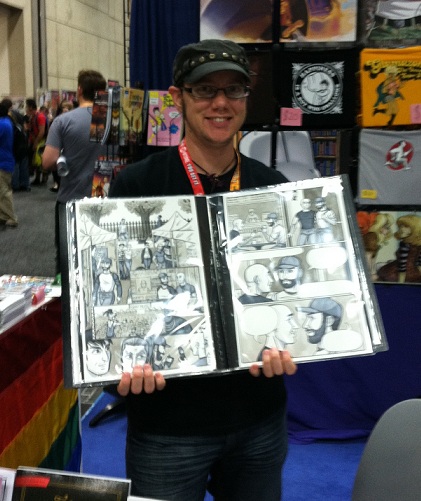 Ed Luce (Wuvable Oaf) is here, and I tweeted his pic, but for some reason can’t find it, so what I have is the back of his Wuvable Oaf doll. Very fun! I’ll try to get a pic of Ed tomorrow. 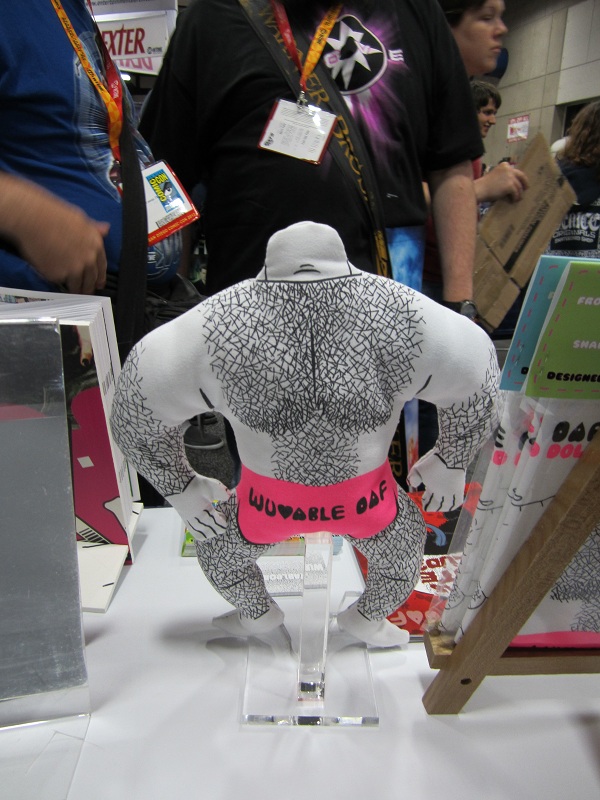 Here’s Paige Braddock (Jane’s World) and her partner Evelyn. Paige is also in No Straight Lines, which is another reason you have to get it. 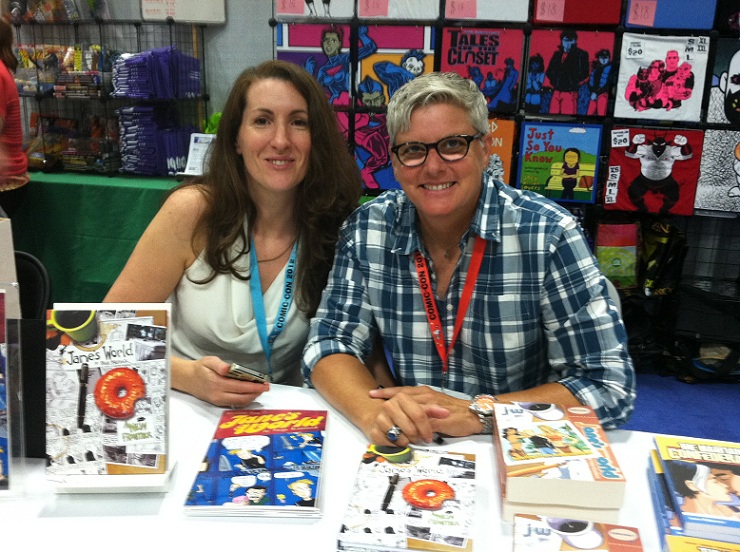 I love this! Here are the women of Scuttlebutt Ink: DustyJack (the mohawk) and JadePrince (the talent), as they describe themselves on their website. 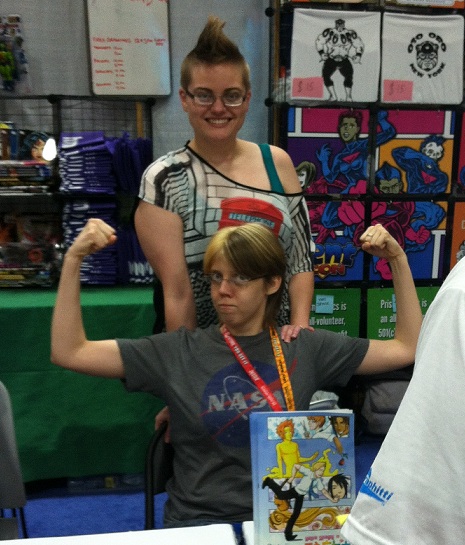 Also was very glad to meet Robb Pearlman who is at the Prism booth with the Nerd Haiku. It’s available here, Amazon and everywhere, so check it out. 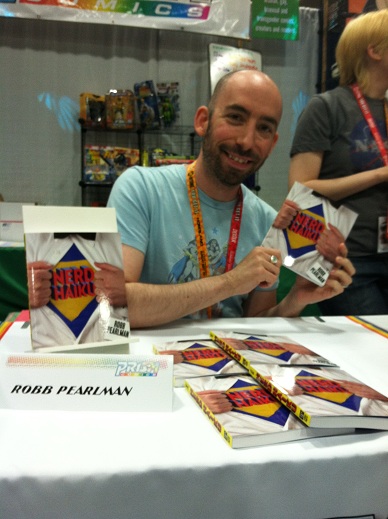 I’ve got more creators to cover, but will get them tomorrow! I roamed the floor and got lots of fun photos, but here’s one of my faves. It’s the Flash doing some spying on the Marvel booth. He’s quite conspicuous, but then I thought, maybe he’s vibrating very quickly and I just happened to catch him with my speedy camera? 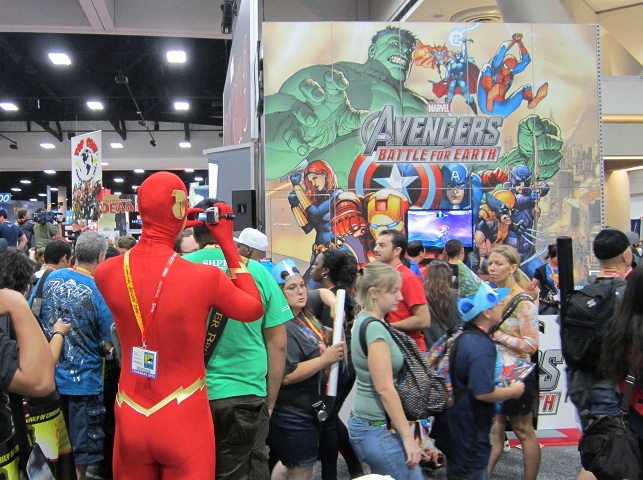 Will post more of the fun floor photos in the next few nerd blogs.

It’s late now as I’m posting this, but did manage to drag myself out and go to Ivan Velez, Jr.’s “Oso Oro” party, which he’s brought over from New York. Ivan Velez is celebrating the 25th anniversary of his groundbreaking Tales of the Closet (available at the Prism booth) and is also the writer of Ghost Rider and Milestone Comics, among many other credits. The party was thrown at Pecs Bar here in San Diego and was a great mingling of locals and Comic-Con folk, sharing some brews and sketching bear models. Here’s a shot featuring the great Justin Hall. 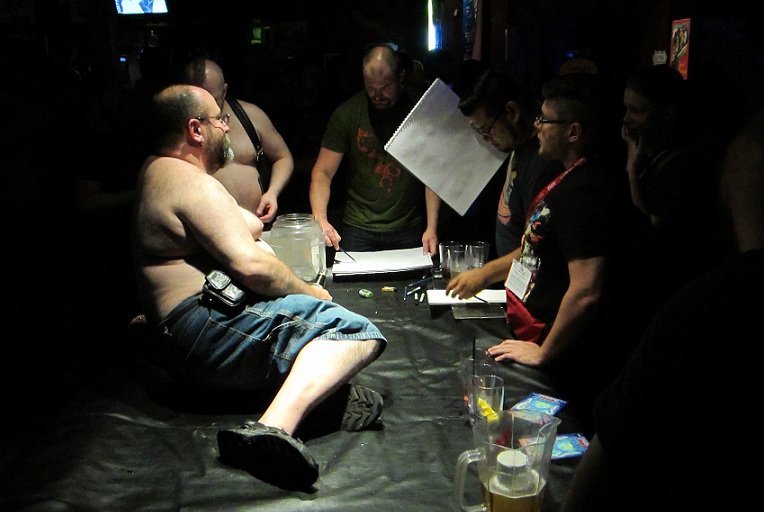 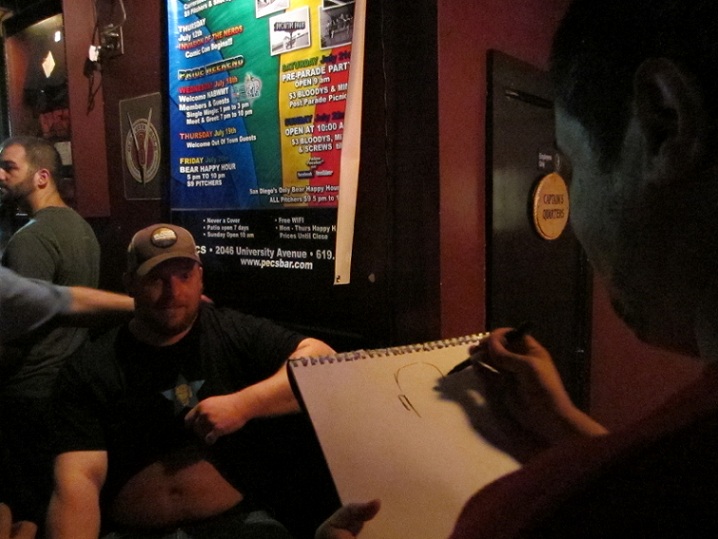 And here you can see Ivan from the opposite angle. 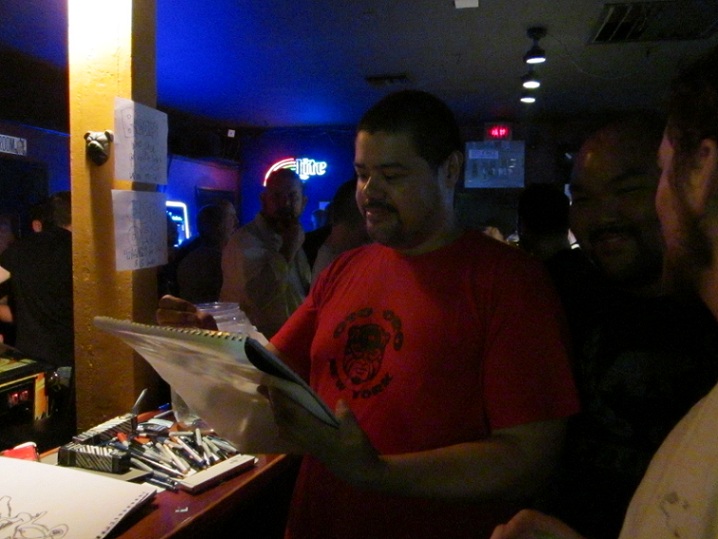 Andy Mangels and his partner Don were also there, appearing in many of the drawings. 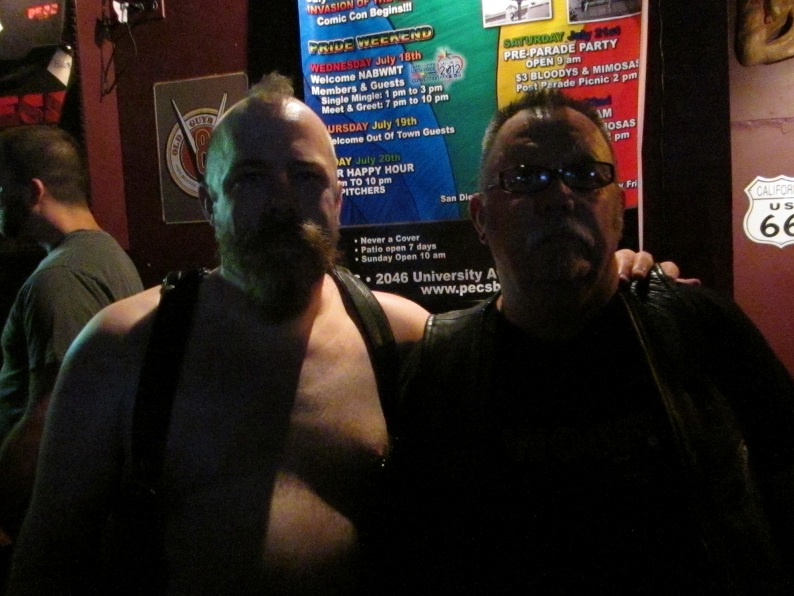 Plus Sean-Z and Steve MacIsaac. 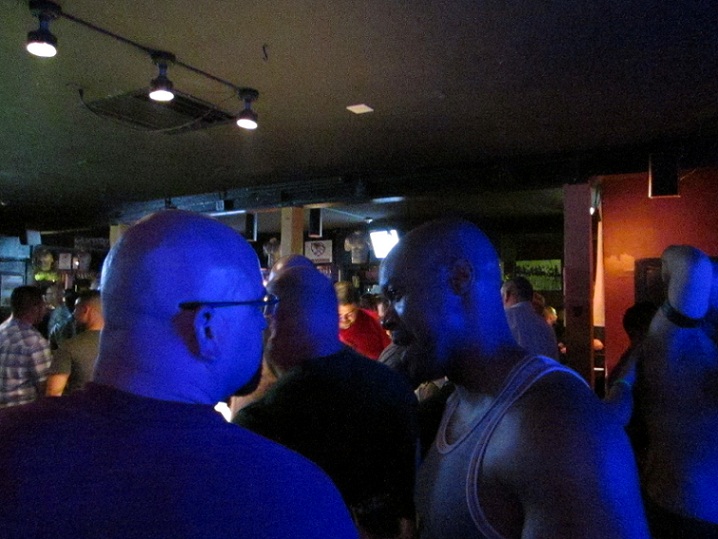 And finally, some of the art. I hope Ivan comes back and makes this an annual thing! 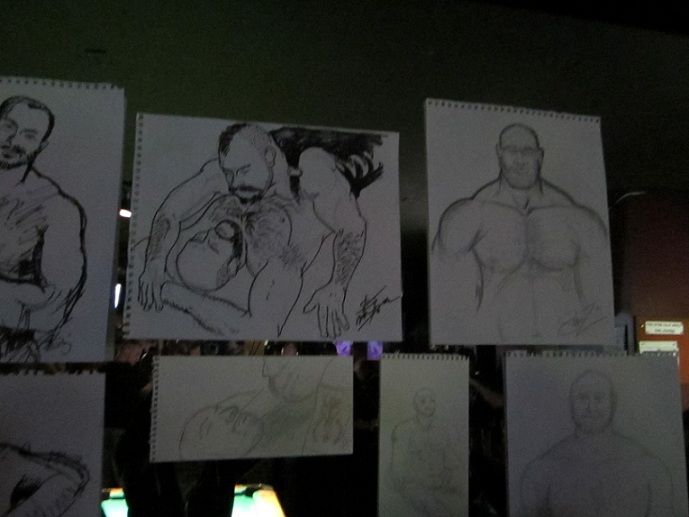 Again, it’s late, got a big day tomorrow (panels, parties, more!). For all the haps, download the Gay Agenda and/or add our calendar listings, all explained here.

I’ll leave you with this—are they adorable or what? 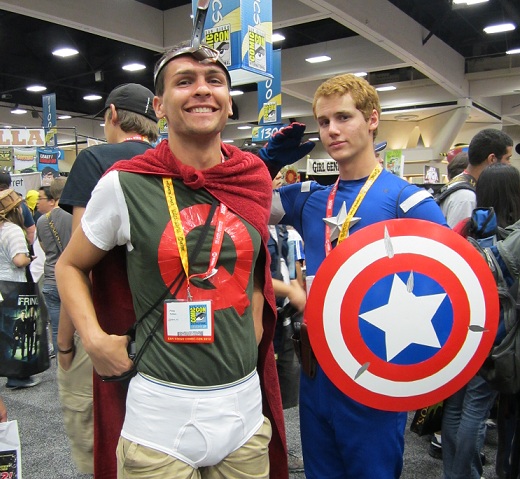