NEW YORK, NY – Konbon-wa from the Big Apple! Just got back from Day 3 of New York Comic-Con. This convention used to be an oasis of comics fun as compared to the craziness of San Diego Comic-Con, but no more. I don’t know if it’s as big, but it’s definitely has all the crowd-induced frustration that we pay a premium to experience.

But since I can’t control the crowd and can only control my response to it, I just slip into my special place where “Honey Boo Boo” lives and everything is fine.

Especially when I reach the Prism booth, a purple pleasure palace. I’m telling you, compared to past years, Chance Whitmire (Fanboys of the Universe), has finally made our booth at NY Comic-Con look professional! And something that attracts people rather than repels them. Chance has done a fantastic job all around and my undying thanks to him for saving us! 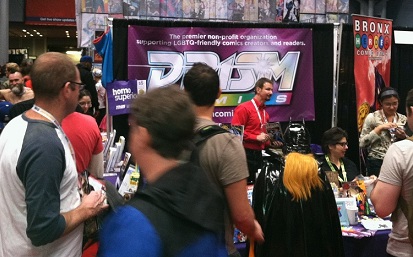 Our booth is #1875. If you haven’t already, come by and visit! And get a copy of The Gay Agenda! And for a double dose of queer fabulousness, our friends at Geeks OUT are right next door.

A huge number of folks have been by the booth to meet our booth partners such as Tim Paul (Kool Aid Gets Fired), Jeff Krell (Jayson Gets a Job) and Sean-Z (Myth). Plus we’ve had guest creators such as Jennifer Camper and Greg Fox and terrific volunteers like my friend Desiree. Below is David Reddish, author of Sex Drugs and Superheroes: A Savage Journey into a Wretched Hive of Scum and Supervillainy and another great volunteer Brian. 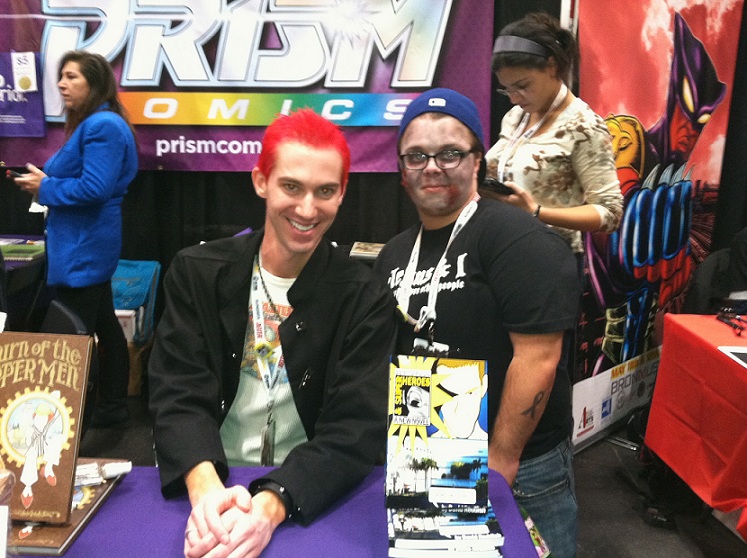 And here’s Brian’s mom, acclaimed author JD Glass with her book CORE. So great to see you, JD! 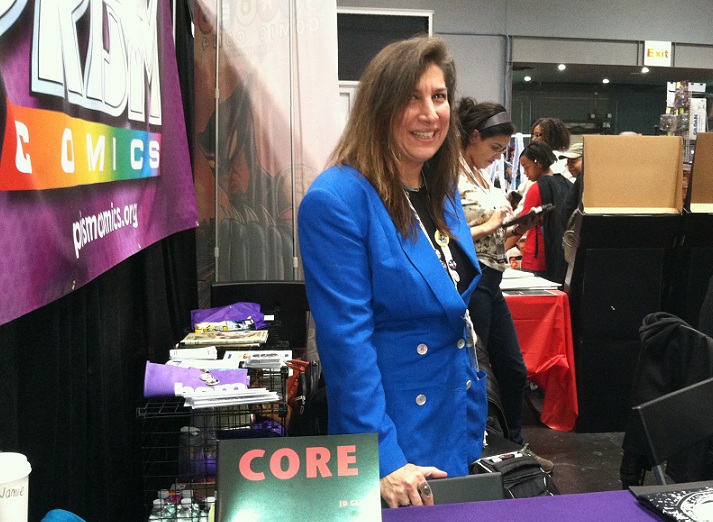 I didn’t get a lot of pics, sorry, was very busy. I was very happy to see my friend Erica Friedman at the convention! Hope you feel better and Rica, too!

I did make it to our Gay Marriage panel, which was packed! When I got there, I found a huge line outside trying to get in. Slipping past security, I found the room packed! It was gratifying to see the overwhelming interest in our panel, but I was a bit sad we weren’t able to have a room big enough for everyone. Alert, NYCC! There’s a huge LGBTQ audience coming to your convention and we need more panels and bigger rooms. 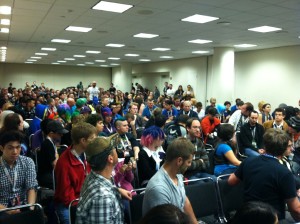 The panel, expertly moderated by Chance Whitmire, and featuring panelists Joan Hilty, Phil Jimenez, Paul Kupperberg and Dan Parent, covered not only gay marriage in comics, but advanced the discussion about gay portrayals in comics in general. Starved in previous years for any gay characters in mainstream comics, suddenly everyone was getting gay-married in high profile, very marketed and news-covered ways. Although as pointed out in the panel, nobody much cared when Apollo and Midnighter were married a decade ago. Phil Jimenez said the change has come down to money. He knows the intentions of the creative forces behind these marriages is sincere, but says that the mainstream companies have realized there is money to be made in storylines that can break through as news. And events such as the Superman-Wonder Woman coupling and the Death of Captain America have broken beyond comics news into the mainstream news. Basically, if the mainstream companies think they can make money, they will make it happen, even transgender characters.

Phil made a point to say that he did not think gay marriage was a bad thing, but he just objected to the characterization that gay people wanted to be just like straight people. He thinks characters are very individual as are their relationships. Paul Kupperberg who pens “Life With Archie”, concurred, saying that Kevin and his husband are different from Archie and Betty or Veronica. Each couple is different. He noted that after a lifetime of writing superhero comics, he was very happy to be writing stories based on relationships and not punches. Phil had a comment that dovetailed into this where he said that it was difficult for creators to delve into the nuances of relationships when in most superhero comics, the main concern is saving the world. Paul said that he finds most relationships in comics are portrayed in a juvenile way. For those having experienced marriage and divorce and children and all the true issues of relationships, he’s never seen any of those realities portrayed. And Joan Hilty revealed that she has been through gay marriage personally and also divorce, so has lived through the other side of the question that is just hitting comics (and many people’s lives) now. 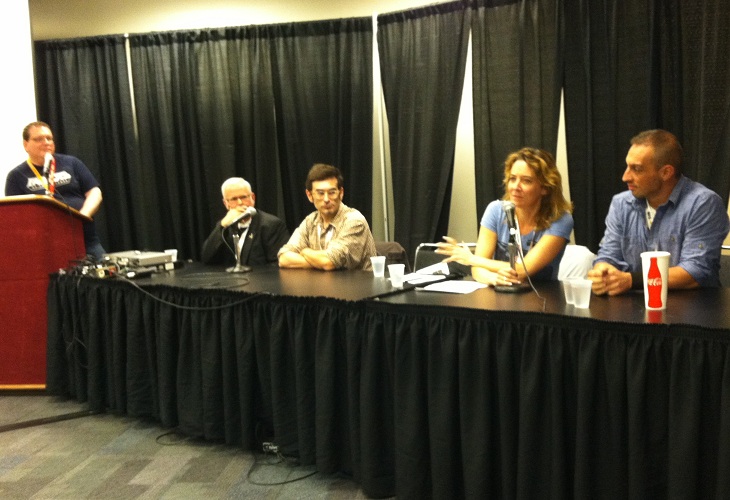 There were so many more issues brought up and great questions from the audience. Hopefully in the future, we can have longer panel times and bigger venues, but were very thankful Comic-Com gave us the forum for this.

One more day to go! I’ll try to take some more pics, plus there’s some big news coming out of APE in San Francisco, so web you soon.