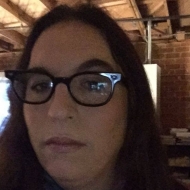 tara@stackeddeckpress.com
http://www.cheatingatsolitaire.net
Tara Madison Avery published her first professional comics in 1990. Since then she has created the bi-themed web comic Gooch and contributed a story to the groundbreaking bi/pan/fluid comics anthology, Anything That Loves. In addition to her work with Prism Comics, Avery has also been a member of the Los Angeles Bi Task Force and served as its chair from 2012 to 2014. In 2015 she founded Stacked Deck Press, a comics publishing house dedicated to showcasing LGBT creators. She is currently working on a new comic, Merrier, inspired by the Los Angeles bi, trans, and poly communities.