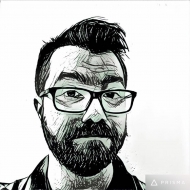 I'm the author of the webcomic "Cryo-Joe" and the new series, "The Long Fall".  I'm also the owner of Island City Comics.

Cryo-Joe (Written by Andrew Carron, Illustrated by Davy Jae) is a science fiction story about a group of space explorers who wake up from cryo-sleep to discover that things have not gone according to plan...

The Long Fall (Written by Andrew Carron, Illustrated by Bella Tsoy) is set decades into the future, after an event called, "The Fall." Civilization as we know it has ended. People struggle to survive in a brutal, changed world. One group of survivors have banded together to create a small village. They are led by an old man, perhaps the oldest man in the world. He remembers the ways of the world before the Fall. He's used this knowledge to help them survive. As the story begins, we learn that he's taken on an apprentice, a gifted young man named Thomas. However, their village is about to face a new threat. Secrets, both small and large, will be revealed. Their lives will never be the same. 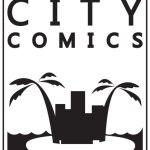 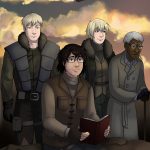