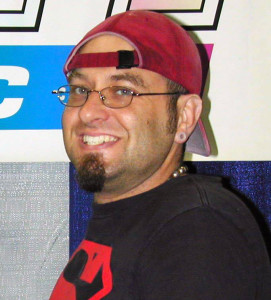 We lost a very special person a few days ago. David Paul Brown, who was the Treasurer and Online Store Manager for Prism Comics for many years, passed unexpectedly around the weekend of January 25, 2014. He is survived by his partner, William O. Tyler, who writes and illustrates for his own imprint, Carabosse Comics, and for others. Our thoughts are with Will and with David and Will’s families, and we would like to share some of them with you as friends and followers of Prism Comics…

“As Events Chair and current President of Prism Comics I’ve run the Prism booths at San Diego Comic-Con and other conventions for many years. We couldn’t have done these shows without the dedicated help of David Paul Brown who ran our online store, managed sales and inventory, and much more. He always had a smile, a gleam in his eye and his distinctive warm chuckle even through long convention hours and tough working situations.

I shot a lot of our Prism stills at cons over the years. I never told David or William this, but every time I took a picture of David and Will at comic conventions their warmth, spirit and energy shined though. It was always there in the photos as was the love David and Will had for each other. It would strike me every convention, every time I looked over the photos after a show. Every photo! That doesn’t happen with everyone – only with special people. You can see some of these photos on our Prism Comics Facebook page –

David was a wonderful, kind and giving person. He will truly be missed, but the love he shared and his spirit will always be with us.”

“I had the good fortune of working with David extensively during my time as President and as an executive board member of Prism Comics.

There was no better person than David to have around when things got difficult; not only would he pitch in and help set things right, but he would do so with a sly smile and wisecrack that poked at the situation without bringing anyone down. He was a rare blend of sarcastic and sweet that showcased a genuine kind heart as well as a practical nature. It was a delight seeing David’s relationship with Will grow over the past decade, and the joy they brought to each other. They were matched in a way that was truly special.

I was honored to know David. I wish we all had the chance to spend more time with him.”

“David was a very sweet man. He was always giving and did it with such sincerity and honesty that it could easily have been invisible. He was charming and had a way of bringing out the giggly twelve year old in me. I will truly miss him. I just wish the world was full of David Paul Browns.”

“An irreplaceable, irrepressible action-dynamo. That was my first impression of David Paul Brown. It was a Comic-Con in San Diego and David Paul was running sales at the Prism booth using a system of his own design and implemented at a pace that would wither most Con vets. Not him, though. Add indefatigable to the list. Never grumpy, never lacking a kind word, never impatient with a new volunteer… A broad smile, a hearty laugh, a touch of mischief. A quick hug and cuddle with William, his partner. He was ripped away from the love of his life—and us all—entirely too soon.”

Past Prism Co-President; Special Advisor to the Board, Prism Comics