“Prism Comics will once again be ‘LGBT-Central’ at WonderCon 2013 in Anaheim. We’re looking forward to an exciting show with some great panels and some wonderful creators appearing with us. Join us at Booth 1009 near the front of Hall A.”

The Prism Comics booth will host a full weekend of creator appearances:

The Prism booth will also have feature booth partners who will appear all throughout the show including Alex Woolfson, Jeff Krell and Bent-Con with Sean-Z. Times and creators subject to change. Stop by the booth for an up-to-date list. And come by to pick up a copy of Prism’s Gay Agenda for everything of LGBTQ and LGBTQ-friendly interest at WonderCon Anaheim.

Prism is proud to present two panels this year:

Jayson cartoons have entertained generations of readers by taking a lighthearted look at gay life in the big city. Title character Jayson Callowhill doesn’t want much – just a job and a man worth having. That’s what he left Farmville and moved to Philadelphia to find. But like many of us, he’s still searching. On Christmas Day in 1982, Jeff Krell created Jayson, which has graced the pages of the Philadelphia Gay News, Gay Comix, Meatmen, and a series of graphic novels including Jayson Goes to Hollywood (2008) and Jayson Gets a Job (2012). Jayson has even starred in an off-Broadway musical (1998) and in an upcoming animated short that will preview at WonderCon. Come celebrate 30 years of Jayson with creator Jeff Krell moderating a talented panel including voice of Jayson, Matt Crabtree (Failing Upwards), voice of Robyn, Dino Andrade (Arkham Asylum), and lead animator Andrew Guiyangco. Presented in collaboration with Prism Comics. Coupons for free copies of Jayson graphic novels given out at panel (while supplies last).

LGBTQ subtext has almost always existed in comics, films and TV shows – From Dr. Wertham’s writings on Batman and Robin to audiences’ musings on Star Wars, Xena, Buffy, Dr. Who and the current Once Upon A Time TV show. “Wink-wink, nudge-nudge” asides, glances and dialogue still get fans talking and slash fictioners “slashing”. Subtext is a legitimate literary and artistic device. But now with the greater prominence and acceptance of LGBTQ characters in media, subtext has even more opportunity to become “maintext”. Will subtext ever come out of the closet? Will the prince ever get the prince – or the princess her princess? How often is subtext in the mind of the beholder? Join Prism Comics and Marc Andreyko (Manhunter), Brad Bell (Husbands), Jane Espenson (Buffy, Once Upon A Time, Husbands), Wendy Pini (Elfquest, Masque of the Red Death), and Jody Wheeler (DoorQ, Bent-Con) as they explore how creators and audiences balance queer subtext. 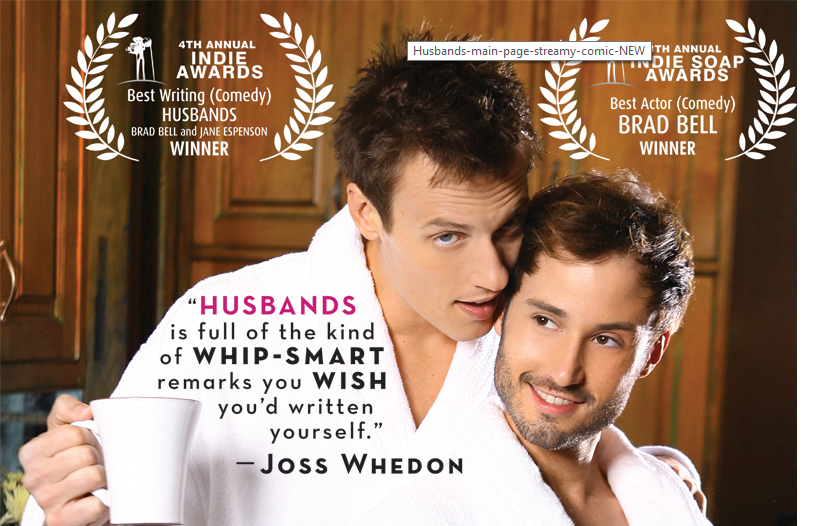