It’s a Tie Between Blue Delliquanti and Christine Smith!

SAN FRANCISCO, CA — At the Alternative Press Expo (APE), Prism Comics announced the recipients of the 2012 Queer Press Grant (QPG) on October 13th during the Queer Cartoonists Panel moderated by Justin Hall. For this year’s recipients, it’s a tie between Blue Delliquanti for O Human Star and Christine Smith for The Princess. Prism Comics, which supports LGBT comics, creators and readers, established the Queer Press Grant in 2005 to encourage the publication of LGBT-themed comics. It is now the only grant today given to independent comic book creators, as the Xeric Foundation is no longer awarding grants for comics.

“We were extremely gratified with the quality of the entries we received this year,” said David Stanley, Prism’s PR Chair. “As a result, we found not one but two very worthy submissions this year from Blue Delliquanti and Christine Smith.” 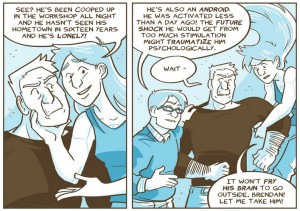 Blue Delliquanti’s entry, O Human Star, is a longform graphic novel, serialized online and in print. Delliquanti is an artist and illustrator based in Atlanta. She has contributed to Womanthology and Smut Peddler and has also collaborated on nonfiction comics with Nathan Schreiber and David Axe.

O Human Star concerns Alastair Sterling, an inventor who sparked the robot revolution, finding himself alive sixteen years after his death in an advanced robotic body that matches his old one exactly. He also finds that his mind has been copied into another robot, in the form of a teenage girl, designed by his old research partner Brendan, who was also his lover. O Human Star follows the story of this unconventional family while also exploring Al’s lifelong discomfort with his gender and sexuality, Brendan’s reluctance to rekindle a relationship with the person he loves, and Sulla’s struggle to step out of Al’s shadow and form her own identity as a young woman.

Christine Smith’s submission, The Princess, is an ongoing web and print comic, which has already won several webcomic community awards, including the DrunkDuck award for best strip. It has been published in Gender Outlaws: The Next Generation edited by Kate Bornstein and S. Bear Borgman, and No Straight Lines: Forty Years Of Queer Comics edited by Justin Hall.

Christine provided this description of herself in introducing her work: “I am a teacher, artist, and I am transgender. These are who I am and they represent what I am passionate about. At the intersection of these paths is my webcomic. It is called The Princess. It is autobiography in the form of fiction, in which I reflect on growing up as a transgender child. It is a tale of inspiration for the child I was, empowering the character who represents her with determination and moxie I wish I’d had. It is a hand reached across generations, in which I offer gender nonconforming children, LGBTQ children, and children from LGBTQ families inspiration and hope to be themselves and shine brightly.”

The Princess can be read at drunkduck.com/the_princess.

For more information regarding Prism Comics, go to prismcomics.org.

Below: Justin Hall and Christine Smith at APE 2012. 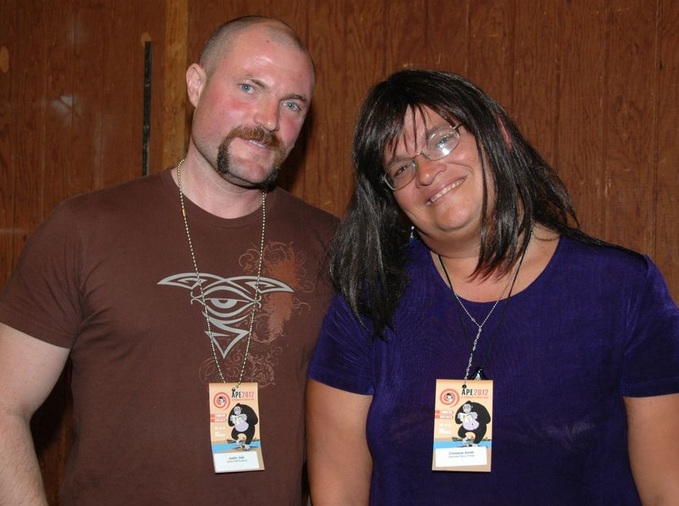