QUEER EYE ED: Happy Halloween, Queer Eyers! In honor of the occasion, I’ve lined up a very special guest for what I’m sure will be an unforgettably eerie interview. So, without any agonizing ado, please welcome the Frankenstein Monster!

F: Heh, heh. Oh, do calm down dear fellow. Just a little drollery on my part. But, after all, you did call me a monster!

QEE: Goodness, so I did! Please forgive me. What name do you prefer?

F: Well, my father never actually gave me one, but most people have assumed my name is Frankenstein. It does seem appropriate, considering that he was the only family I ever had. My husband insists on shortening that to “Frankie”, but then he has a very dry sense of humor. 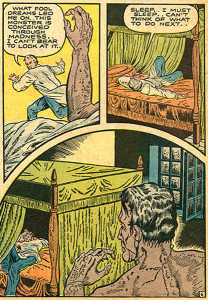 QEE: Husband?! Er, does that mean that you’re…

QEE: But, you asked Victor Frankenstein to make you a wife!

F: One of those silly follies of youth, when you’re trying to be something you‘re not. I didn’t fully come out until I was almost middle aged, on my 153rd birthday.

QEE: I understand. Now, about your husband…

F: Oh, he’ll be by later. But, let’s commence at the beginning of my story. There’s a lot more there than meets the straight eye.

QEE: As I suspected! So, about your father. What was he like?

F: Sigh. Pater had his own issues. His family had been planning his marriage to his cousin Elizabeth since the two were children! Imagine growing up with that kind of pressure. Father preferred the companionship of his “good friend” Henry Clerval. The two were inseparable, if you know what I mean.

F: A mad-about-the-boy scientist! He told his father that until he could satisfy his “thirst for knowledge” he couldn’t possibly marry. Then he scampered off to university and began to experiment, like many another gay lad. 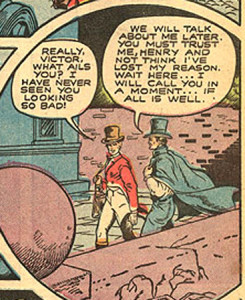 QEE: And the result was you?

F: Eventually. You see, dad just couldn’t find anyone who could replace Henry in his heart, so he finally decided to literally make Mr. Right. Of course, he kept his work a complete secret. After all, there he was, setting out to create a man, when he could have just as easily made a woman. Try explaining that one at the frat house!

QEE: And when you were finished?

F: Disaster! Unfortunately, father got a little carried away in the size department, among other things. I mean, look at Henry. Short, blonde, blue-eyed, peaches and cream complexion. Now, look at me. Still, Victor did the best he could with the limited materials available. But, I ended up about as far as you can get from his type!

QEE: So he ran out into the night and…

F: Abandoned me! Now, really. When a fellow wakes up in your room, you should at least offer to make him breakfast!

QEE: Tell me about it!

F: And, who should he happen to meet as he roamed the town? Henry, come to join him in his studies! Victor, impulsive as always, invited him back to his room for a little sparking, hoping that I wouldn‘t be there!

F: Naturally, I was long gone. Shocked, nay, thunderstruck by his inhospitable hissy fit, I had put on some of dad’s clothing and set out to explore the world on my own.

QEE: Eventually learning to speak, read and write by spying on a farm family.

F: Convenient, wasn’t it? Finally, I tracked down Victor’s home town using some papers that were in the pocket of his coat.

QEE: And, er, that’s when the murdering started.

F: I’m really sorry about that! Remember, I was just a baby. True, an eight foot tall baby. But, you’ve got to expect tantrums now and again from a newborn when things don’t suit him. Plus, imagine being a child trapped in an ungainly, sexually mature body.

QEE: I don’t have to. I went through puberty.

F: So you did! At least I missed that horror. Anyway, things would have worked out all right if only dad had kept his promise to whip up a wife for me.

F: I was naïve! Besides, I didn’t ask for a mate. I said I wanted “a wife for a friend”. I didn’t know we were supposed to do some further connecting of parts.

F: Well, I followed Victor all the way to Scotland, where he started work on the new model. And he took his sweet time getting up to the Orkneys, let me tell you. In fact, the trip was more like a grand tour of the continent. And who do you think he took along? That bitch Henry!

QEE: Why am I not surprised? 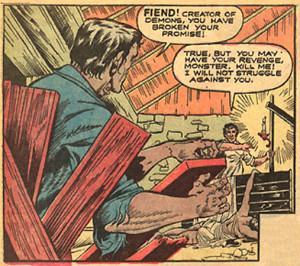 F: I let that pass. I was willing to put up with anything to get my gal. But, at the last minute dad went nuts, destroyed his almost completed project and dared me to kill him!

QEE: Which you refused to do. Er, but there were a few more deaths, weren’t there?

F: I have anger management problems!

QEE: Who doesn’t? Cutting to the chase, after that unfortunate incident on Victor’s honeymoon…

F: I’m sorry about that one too!

QEE: …he chased you all the way to the Arctic, vowing to kill you.

F: Which led to his own untimely demise. But, I didn’t do it!

QEE: I know, I know. Pneumonia and frostbite.

F: And then I drifted off on an ice floe. End of story.

QEE: Well, not exactly. I mean, you’re still alive. What happened next?

F: I roamed the world. Russia. China. India. Egypt, which is where I met my husband. Say, here he is now!

IMHOTEP: May the blessings of Isis be upon you. 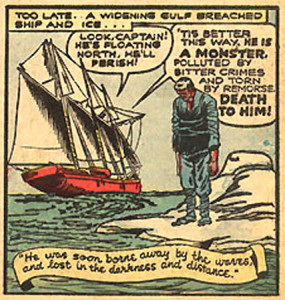 F: Our friends say we were made for each other. Besides, I’ve always had a thing for older men.

QEE: I’m so happy for the two of you! Boy, do I have a lot more questions now!

I: A thousand pardons, but we need to wrap this up.

F: Sorry. Count Dracula is having a little get together and he gets all high and flighty if we’re late.

QEE: Right back at you! And, there they go. Hmm. I wonder who else will be at that party?

LARRY TALBOT: Shucks! Just missed them, didn’t I? I was hoping they’d give me a lift.

LT: Oh, don’t tell me you didn’t suspect. And, please, no jokes about “doggy style”, “mooning”, or “hairy palms”. Surely, we’re all above that kind of low humor here.

QEE: You haven’t read too many of these articles, have you?