Octobriana is one of those comics which make you think “Why isn’t this more famous?”. Because it has everything: an unusual setting, a beautiful and hands-on heroine who’d give Wonder Woman a run for her money, a dangerous opponent—and it’s queer-inclusive. This should have been published as a Vertigo comic, just like Enigma or Chiaroscuro. 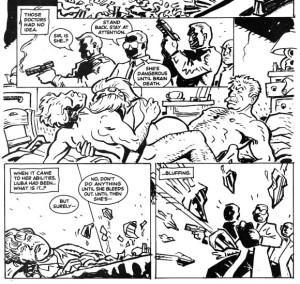 This 88-page, black and white comic, which you can buy here, is written by Steve Orlando, a writer I didn’t know, and drawn by Chaz Truog, who was one of the Chiaroscuro co-creators. I hadn’t seen his work in a while, so it was a pleasure to find him in fine form.

Orlando has done something quite clever by using a character from a fake 1960s Russian book created in the 70s by a Czech artist (more about the incredible history of the Octobriana character here or here), and turning her into a very modern kind of heroine.

In this version of her adventures, Octobriana is a Russian goddess-in-training, who finds herself embroiled in the catastrophic overwhelming of people throughout the USSR by an almost dead telepathic woman. Sounds weird? You’ve seen nothing. When her magnificently mustached lover Leonid is killed and then taken over by the mysterious mental force, Octobriana decides to avenge him, as much for herself as for their lover Misha, a young man violently hurt by the zombified Leonid. 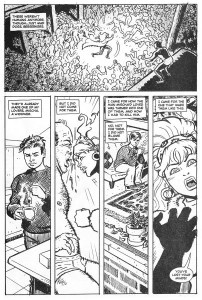 Orlando and Truog portray the three-way very matter of factly, simply showing three people who love each other. This inclusiveness is carried on throughout the book, in two ways: first, we see that it’s in fact lovers who are being taken over by the hateful psionic and all kinds of lovers are shown in vignettes; second, Misha, who’s been healed by Octobriana, narrates parts of the book. There are two characters who provide a voice-over, these being Misha and Octobriana herself. The balance between the two anchors the story at a human level, something which Orlando seemed to have been keen on, with his depiction of an heroine who straddles both worlds of gods and human beings.

Chas Truog seems as much at ease during the sequences showing Octobriana making love with her two male lovers as during flashback of her time with gods, or when the story requires action scenes. And there’s a lot of action here: Octobriana journeys through Russian winter to confront the culprit, a woman who’s been mistreated her whole life because of her mental powers which had whetted the appetite of all kinds of Russian scientists and soldiers. Truog gives us a portrait of a Russian matron driven to insanity, and makes us relate to her never having been able to love whom she wanted. He also gives us a variety of attractive men, a welcome bonus.

For all their supernatural mastery of life and death, both the heroine and her opponent are shown as being motivated by very human feelings of love, regret and hate. I’d very much like to see more about Octobriana and her world, especially if the inclusiveness of this first story is retained.

Editors’ Note – Thanks for reading! Head over to The Gay Comics List to read the original post as well as many, many other wonderful comic reviews! – PKA