“Night of the Living Vote-Snatchers” or The Most Terrifying Comic You’ll Read This Year!

Steal Back Your Vote

Forces out there are trying to steal your vote. Forget all this talk of Acorn and McCain’s operatic-like claim that they are perpetrating the biggest voter fraud in history. The truth is, any suspicious Mickey Mouse registrations are being thrown out quite efficiently. In fact, in the last election, THREE MILLION VOTES WERE THROWN OUT AND NOT EVEN COUNTED. And this doesn’t even count the number of people being wrongly denied the right to vote at all.

This horror story is detailed in the comic book called Steal Back Your Vote, created by investigative reporter Greg Palast and law professor and voting law expert Robert Kennedy, Jr. It’s available for free at Palast’s website (although they encourage a donation to help their efforts).

How were three million votes thrown out, you ask? Well, after the debacle with the 2000 Presidential election, which to put it mildly, revealed serious problems with the voting system, George Bush decided to “help” the state election boards and created an agency called “Elections Assistance Commission”, to basically ensure that elections got fixed “real good”. And as in Florida, much of this is directed at disenfranchising voters, especially minorities, who are more likely to vote for Democratic candidates. 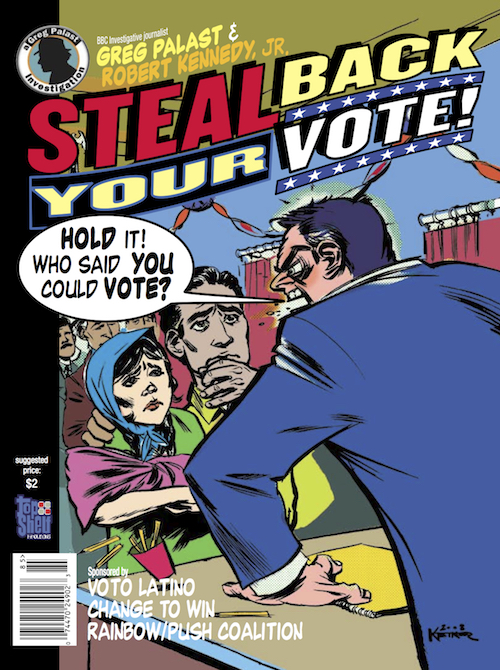 One scary example given is how the “Republican Secretary of State of Colorado ‘helped’ her state by eliminating 19.4% of the voters from the voter rolls. That’s one in five !@#$#@ voters!” Seeing how close the last few elections have been, each vote is crucial.

This disproportionately affects African-American voters. A black voter’s ballot is 900 more likely than a white voter’s ballot to get “lost”. Similarly, Hispanic votes are 500% more likely not to be counted. There are many methods employed to do this: targeting people who have moved (or more disgustingly, those who have lost their homes) whose addresses may not match the ones registered, eliminating anyone with the same last name as a felon, making rules for absentee ballots so convoluted that most don’t count, requiring IDs (which in one example, denied 10 nuns from voting in Indiana in 2004), forcing provisional ballots on people (which mostly get tossed), or just losing ballots.

In 2004, 1,389,231 votes were never counted because they were “spoiled”, which means they were supposedly unreadable, blank or just somehow lost in the machines. Of these, it was, again, African-Americans whose ballots were 900 times more likely to have been unreadable, blank or somehow lost. They give a great example in the comic how of the 207 votes cast on voting machines in Dona Ana County, New Mexico, not one recorded a vote for either George Bush or John Kerry. According to the Secretary of State, “Some of those people just can’t make up their minds.” Dona Ana I s 63% Hispanic.

Anyhow, I think you get the picture. This is beautifully laid out in Steal Back Your Vote, which not only chronicles the growing problem, but gives each voter knowledge and tools to fight back.

The seven biggest pointers they give are: 1) don’t mail in your ballot, 2) vote early, 3) make doubly sure you are registered to vote even if you filled out the form, 4) do not accept provisional ballots (described in more detail in the comic), 5) volunteer to help others register and vote, 6) vote with someone and have information just in case your right to vote is challenged, 7) do everything you can to demand that all votes are counted.

Don’t let this horror story happen to you. Go to the website, download the comic, spread the word, be prepared, and vote.