QUEER EYE ED: Hello and welcome one and all! This time out I’m bringing you up to the minute coverage of all the goings on at one of the most festive holiday events in the multiverse, the Comic Book Limbo New Year’s Eve Ball! Yes, all your favorite characters of yesteryear are here, partying like there’s no tomorrow. Of course that’s been true for some of them for over fifty years. But being frozen in time does wonders for one’s appearance, so they look just as fresh as when they first saw the light of print. How I wish you could see this gaudy, giddy assemblage! They may not exist in current continuity, but they certainly know how to shake their back number booties. Follow me as I make my way through the crowd, interviewing some of the… Oops! Pardon me, sir. I didn’t mean to bump into you.

STEVE: I would say “Reporting for duty!” but we’re beyond all that here.

QEE: Well, you’ve earned a quiet retirement, given all you went through.

STEVE: At least I never “died” like my later counterparts.

QEE: True. But being eliminated by Crisis on Infinite Earths can’t have been too pleasant either.

STEVE: Actually, they sent me off with Diana to live with the gods on Mount Olympus.

QEE: How’d that work out? 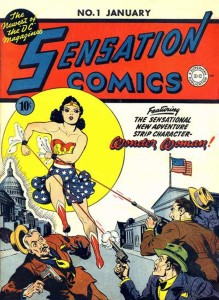 STEVE: Since DC then deleted that version of Olympus from continuity, Di and I were automatically transferred here.

QEE: I guess that was something of a let down!

STEVE: Not really. The gods are such a cliquish, bitchy little group. And Zeus is a loud mouthed old boor. Every night he’d get drunk and start yelling “Ganymede! Come here and ‘bear my cup’”!

QEE: I’ve never heard it called that before! Speaking of the Princess, how is Wonder Woman?

QEE: Would you mind giving us a rundown of how that happened?

STEVE: Happy to oblige. I was following a plane piloted by a member of a nasty ring of spies and saboteurs, when my craft ran out of gas and crashed.

QEE: On Paradise Island! Say, why did the Amazons call it that?

STEVE: Diana had never seen a man before. Although I didn’t know it at the time, she immediately fell madly in love with me.

QEE: But I thought the island was…

STEVE: Oh, she was young. I was something different. The fact that her mother disapproved made me all the more attractive.

QEE: Then, she won the right to take you back to “Man’s World”. 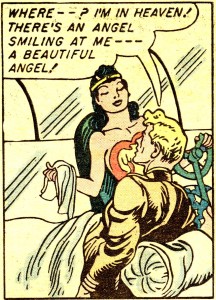 STEVE: Exactly. I first saw her when I woke up with a brain concussion on board her Invisible Plane.

QEE: She must have made quite an impression!

STEVE: I fainted! I’ve always liked strong women. Anyway, she took me to a hospital in Washington, D. C. By coincidence, a nurse there named Diana Prince was looking for a way to join her fiance in South America. My Princess gave her enough money to make the trip, then took her place on the hospital staff.

STEVE: She had made a bundle doing a “bullets and bracelets” stage act for a brief time after her arrival.

STEVE: We do sometimes refer to our old world as “Earth Too Good to Be True”. When I had recovered somewhat, I saw a newspaper story about Nazi spies and was off on their trail again. Di and I tracked them down and brought them to justice.

QEE: Arrested them to stand trial?

STEVE: Er… actually, I killed them with their own poison gas. This was before the Comics Code.

QEE: You ought to see what they’re doing to bad guys these days!

STEVE: Thanks. I’ll pass. The nicest thing about Limbo is that we all get along now.

QEE: That‘s good to hear. Say, since things are timeless and changeless in Limbo, do you make New Year’s Resolutions?

STEVE: Of course. We all resolve never to go back. But it’s not dull here. We still have goals, plan get togethers like this, get married…

QEE: Married?! So, you finally did it?

STEVE: Yes! It was inevitable. As they say, opposites attract.

QEE: I see. Blonde and brunette. Buttoned down military office and flashy adventurer.

STEVE: And here he comes now. Meet my darling husband!

QEE: But I thought you meant you and Diana…

STEVE: Oh no. We were both young and inexperienced when we met. It took us years to figure it out. I did really like that thing she’d do with her lasso, but Adam is a lot more inventive.

BA: We ancient Egyptians know a thing or two about rope.

QEE: Hmm. I see the Colonel is standing at attention just thinking about it. But, what about Wonder Woman? Did she ever “tie the knot” with someone?

STEVE: Oh, I don’t think she’s the marrying kind. Too independent. We all thought she might have found “the one” when she started dating Mary Marvel.

BA: But then people started teasing her and Steve for being Shazamophiles, so she broke it off.

QEE: Hey, you just said Shazam and nothing happened!

BA: There’s no Rock of Eternity in Limbo. Unless you count Steve after he’s been bound and flagged.

STEVE: It’s a fetish of mine. Remember Di’s costume?

QEE: Oh yeah! Well, I won’t keep you. Go and enjoy the party while I talk to a few more guests.

STEVE: C’mon Adam. Lana is opening those bottles of aged champagne she brought. We can be the Gays of Old Lang Wine!

QEE: And there they go! What a cute couple. I wonder if there are any other unexpected pairings like that here.

THE ICICLE: You mean like us, you chilly old queen?

THE HUMAN TORCH: Now dear, be polite or I’ll have to tan your ice!