The day has been a total pisser.

Your boss has worked your last good nerve by deciding that the last project that you’ve done needs to be done again…by the end of the day.

Your spouse decided that you needed to do the dishes…that he has left soaking for the past three weeks.

You read in the news that the Government has decided that Corporations are people, but gays…not so much.

So you sit right down in your favorite easy chair, lean back and fantasize about the end of civilization.

But which one? Comic books throughout the years have presented us with several different choices on how everything that we know and love can come to an end, so we need to buckle down in our radiation suits and decide on which one is going to dominate our thoughts.

Well, first off we can start with a nuclear apocalypse. That one is always popular. Mitt Romney can be visiting over in a foreign country and then happens to say something about how God is going to smite them at the earliest opportunity…all with love, of course. The leader of that country says something that roughly translates to “and so’s your mama” and we are off to the races.

Now I have to admit that this has speediness on its side. It’s quick and to the point. But the problem comes from one simple question…Who wants to live in a world of bad Road Warrior wannabe’s? I mean who actually fantasizes about a world full of men in leather outfits riding all over the place on dusty motorcycles?

But the bad haircuts and the Tina Turner soundtrack? Maybe I could take it for a few months, but not for the rest of my life! (This isn’t a knock to Tina. I just can only stand “We Don’t Need Another Hero” so many times before my forehead explodes.)

Of course we might also end up with the Kamandi future with the intelligent humanoid animals. Yeah, it might be fun to live with a dog who can take himself out for walksies. And a cat would understand you when you say “What are YOU looking at?” But on the downside, when someone on Grindr advertises themselves as a bear, they might just be literal! Not to mention that having a cow give you milk then would be just plain wrong!!

No, I think we can cross that one off of our list.

We also have the choice of a worldwide illness running rampant over all of us. The one that immediately comes to mind is the world of Y The Last Man, where all men except for one drops dead and there are only women left.

How about an alien invasion? That’s always popular. Mankind is enslaved by green-skinned monsters, like in the original Guardians of the Galaxy. One of the few plus sides is that we wouldn’t have to listen to campaign ads for President, since usually alien monsters have a royal family in charge. Somehow, I just can’t see a member of the Badoon race coming on TV saying “Blxrytrk is out to destroy relationships as we know them! A relationship should be between one Badoon, two men, four women, a goat and the BBQ sauce!”

But no. Despite that, I’m just way too damn lazy to be a work slave for life, and I just don’t have the looks or the lube to be a sex slave. 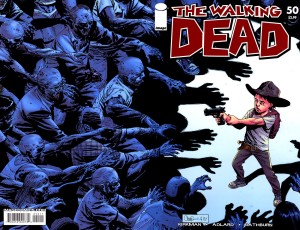 And now we reach the zombie apocalypse, just like in the Walking Dead. Now it’s true that you would have to deal with the constant stench. Let’s face it, having millions of dead bodies spread out all over the world would begin to smell worse than the McDonald’s deep fat fryer at the end of an all you can eat McNuggets fest. Plus, you would have to be EXTREMELY careful who you tell to ‘bite me’!

But that, I feel, is more than balanced by the fact that everyone you know…including the previously mentioned boss, spouse and Republican’ts, would all now be in your area and you would have free reign to play Whack-A-Mole with them with your baseball bat!

Ah, sweet release. And all without the annoying visits by the police to ask about that hole in your backyard!

So tell me…which would YOU choose?