So the plan was to wait until the Kevin Keller miniseries wrapped before penning this review. But because the first two issues have been so extraordinary, I couldn’t wait any longer.

I’m still trying to wrap my head around the fact that somehow when no one was looking, Archie became the coolest kid in the room. Forget 90 percent of the titles being churned out by the big two. If you’re looking for quality and progressive comics, Archie is where it’s at. Yes Archie. Yes, you read that sentence correctly. No, I am not joking. Yes, we could be in Bizarro World. Let me get back to you on that one. 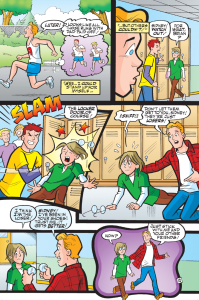 I’ve read Archie comics with a twisted fascination for many years. The whole Mayberry/Stepford theme was something of a morbid fascination. A comic book full of good-natured clean wholesome fun revolving around a gang of vanilla All-American teens required far more suspension of disbelief than any story about aliens, mutants or bionic ninjas. Back then of course, the Archie issues would be “snuck in” with my stack of comics. And if the cashier noticed, I could chuckle and ask, “How did that get in there? Well, since it’s already been pulled, I guess I might as well purchase it.”

I wasn’t fooling anyone. These days when I go into my local comic book store, I wear the ‘A’ with pride…

Comic Book Person: Hey, we got the new Green Arrow in.

Me: Yawn and pass.

Me: How about no.

Comic Book Person: We’ve got the latest issue of Daredevil where he battles the Hand…..again.

Me: NINJA PLEEZE!!!! They can talk to the hand, because the only comic I’m interested in this week is Archie.

Me: Did I stutter? Yeah Archie. He’s awesome!

Me: You got a problem with Archie? I KNOW YOU NOT DISRESPECTING MY PEEPULS!!!

……..That conversation may or may not have happened two Saturdays ago when I was picking up my stack of comics during my weekly comic book run.

For those of you who have been keeping up with Archie, there is a reason for the major progressive shift. Since new editorial management has taken over, there has been an emphasis on diversity: characters of various ethnicities as well as queer characters. The powers that be at Archie have been working to make it clear that Riverdale is that ideal town that EVERYONE can be a part of.

In fact Keller’s debut in Veronica #202 came right off the heels of a critically acclaimed interracial romantic story arc between Archie and Val of Josie and the Pussycats.

While the big two comic companies often pay lip service to diversity, Archie is actually doing it, and doing it well.

The first two issues provide backstory on Keller’s history and show his journey into becoming the extraordinary young man he is today. 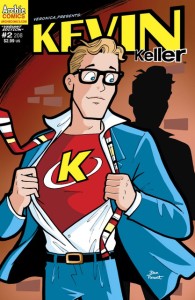 The writers do an excellent job in fleshing out Keller to establish that he’s more than the gay guy.

And who is Keller? He’s the proud son of a military colonel. He’s a journalist and a writer. He’s the one guy on the planet who can actually rival Jughead in an eating contest. He’s proven to be a positive and calming influence on the always fierce Veronica. He’s strong, wise and kind. He’s the kid that any parent would be honored to call their son. Keller is all of those things and much more.

The two issues also pull no punches (no pun intended) in tackling bullying and homophobia. But what really floored me was that the two issues showed Keller fighting his own battles, standing up for himself and others and being strong. He wasn’t weak or helpless or the tragic gay that needed to be rescued by a cis-straight savior. With this being Archie, needless to say much hilarity and hijinks ensued. I read, I cheered and then I got depressed. While reading, my hands trembled and I dropped the issue. Keller’s story could’ve helped me when I was younger. Reading about him would’ve made me not feel like some kind of freak or mistake. Maybe if I had more Kellers in my life, maybe my journey to acceptance wouldn’t have been as painful or as tragic. But better late than never. And there’s a whole generation out there who will have a champion in Keller.

Because of the continuous success of his appearances and the miniseries, Keller will be getting his own ongoing series early next year. This is one superhero comic I’m eagerly awaiting.

And make no mistake. Kevin Keller is a superhero in every sense of the word.

Editors’ Note – Thanks for reading! We’ll see you later this week with some thoughts about The New 52! – PKA