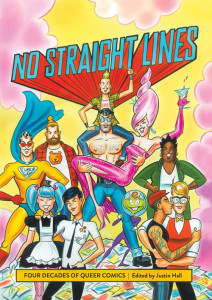 San Diego, CA – The Will Eisner Comic Industry Awards Nominees for 2013 have been announced and No Straight Lines: Four Decades of Queer Comics, edited by Justin Hall and published by Fantagraphics, was nominated as Best Anthology. Justin Hall, who has been a long-serving board member of Prism Comics which promotes LGBT comics and creators, compiled a comprehensive and exhaustive survey of queer comics, starting from the pioneers of the genre and continuing through the decades showcasing work from the generations that followed. The anthology showcases everything from lesbian underground comix, to gay newspaper strips, to bi punk zines, to trans webcomics.

This nomination comes on the heels of No Straight Lines being named a Lambda Literary Awards finalist for LGBT Anthology.

No Straight Lines has garnered a storm of media coverage and acclaim. See Glen Weldon’s review in the New York Times , plus Justin’s interviews in Comic Book Resources and The Advocate, among many others.