Meet Justin Hall (Glamazonia: The Uncanny Super-Tranny!) this weekend at the Alternative Press Expo (APE) in San Francisco, October 1-2, where he will be sharing a table with Dave Davenport (Hard To Swallow). Hall will have two new books for APE this year–the Glamazonia collection published by Northwest Press plus Steve MacIsaac’s Shirtlifter #4, in which he’s featured. Davenport will premier new t-shirts plus have available his new Feral and Ghostskater book (which debuted at San Diego Comic-Con).

Hall will be moderating the Queer Cartoonists panel, on Saturday, October 1st, from 5-6pm:

LGBT comics have come a long way from their roots in the erotic pictorials of the 1960’s and the underground comix of the 1970’s; what are the challenges and opportunities presenting themselves to modern queer comics as they find both mainstream acceptance and smaller niche markets on the web and beyond? Join this dynamic panel in its eighth year at APE, as a diverse and talented line-up of cartoonists discusses everything from self-publishing to memoirs to sex comics: Agnes Czaja (Acrobats), Charles “Zan” Christensen (Northwest Press), Dave Davenport (Feral and Ghostskater), Tana Ford (Duck), Annie Murphy (Gay Genius), Stefan Salinas (Within The Rat), and moderator Justin Hall (True Travel Tales). The panel is dedicated Dylan Williams of Sparkplug Books. 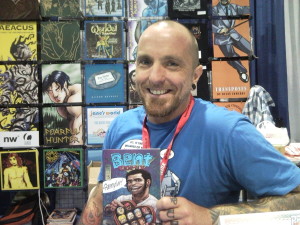 For more information on Justin, go to www.allthumbspress.com. For Dave Davenport, go to www.dogspunk.com. For directions and more info on APE, go to www.comic-con.org/ape.