Have you had a chance to check out Marvel’s Voices: Pride #1? The anthology celebrates queer characters in Marvel Comics and features an all-star lineup of queer creators! One of those stories, “Good Judy,” by Terry Blas, Paulina Ganucheau, Kendall Goode, and Ariana Maher, featuring Anole!

Prism got the opportunity to catch up with Blas and find out what inspired the story “Good Judy,” why it’s important to show queer friendships in addition to queer romance, and in what ways he relates to Anole! 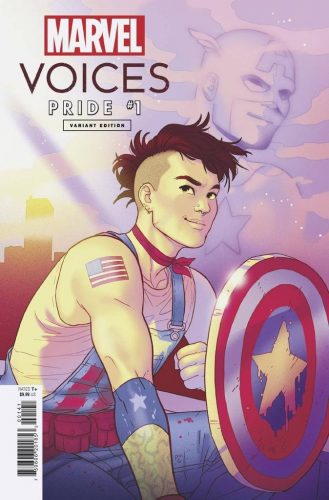 AVERY KAPLAN: Can you tell us about the genesis of this story?

TERRY BLAS: I think so often, stories about the LGBTQ community focus on romance which is wonderful, but I wanted to tell a story about gay friends. Friendships are so important to me and having queer friends who understand you has been so valuable to me. I love Anole and I had read issues where he and Jonas Graymalkin talked a bit about helping each other through difficult times. I started there.

KAPLAN: Do you have a personal history with Anole (or any of the other characters who make an appearance in this story)? What was it like to tell this kind of story with established Marvel Super Heroes?

BLAS: I have struggled with physical self-confidence, especially being a gay man who isn’t very thin or in shape. Amazing X-Men #13 is all about Anole and his insecurity. He has a date that he’s scared to go on because of how he looks. In that issue, Northstar tells him he understands and Anole replies with basically something like: “No you don’t. You look like a supermodel.” It was funny but also sad. I love that issue. So I relate to Anole and really love his character.

KAPLAN: Why is it so important to include the stories of legacy queer characters alongside newly debuted characters when it comes to anthologies like Marvel’s Voices: Pride #1?

BLAS: I think it’s important so we can see that variety. If you only have one queer character they have to carry the burden of representing for a whole community, and all queer people don’t care about the same things or think the same. Also, having new characters is fun and having legacy characters in there helps reinforce that we as a community have always been here. 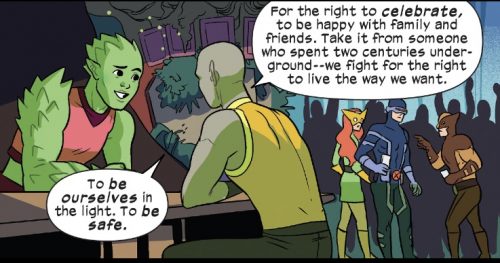 KAPLAN: Why are comics such a good medium for exploring serious issues like struggling with one’s physical self-confidence?

BLAS: Comics are a good medium for anything! They’re just like movies. But I think many people who read comics often feel like outsiders or are made to feel like outsiders, so hopefully comics, as they gain more popularity, are a place for people who don’t feel that way to empathize with those who do.

KAPLAN: In the guide to Marvel’s Voices: Pride #1 on Marvel.com, you alluded to the fact that this story highlights the importance of having gay friends in your life! Why is it so important to include a story about this theme in the anthology?

KAPLAN: Was there any element that presented a particular developmental challenge while you were working on the story, or did it come together fairly easily?

BLAS: I wouldn’t say it was a challenge, but I wanted to include other characters that I love so I was able to do that in the background. It’s a funny gag that we were able to fit in.

KAPLAN: Is there anything else that you’d like me to include?

KAPLAN: Thank you so much for taking the time to answer my questions!

Marvel’s Voices: Pride #1 is available at your local comic shop right now! Plus, be sure and pick up Reptil #1 and #2, also written by Blas.