We asked Orlando and Vecchio all about the secret history of Somnus, why it is essential for comics to have queer representation, and what went into designing that incredible Somnus frame variant cover!

AVERY KAPLAN: What makes Somnus such an exciting new character for queer readers?

STEVE ORLANDO: To me, it’s all about his perspective. Somnus is someone who missed out on Mutantkind’s, and the Queer Community’s, relative moment of progress. He was born during the baby boom, in the era of minding your own business and bottling up your feelings. Now, thanks to Krakoa, he’s got his second chance and utopia, an opportunity to live without compromising who he is. So he offers a lot of wish fulfillment in that way, but also offers a strong reminder of how far we’ve come, and how many struggled along the way. Reborn in his prime, Somnus is now ready to see the world, live life with the most adventure and intrigue he can, and full explore his identity as a mutant, and as a gay man. But with his power over dreams, he’s also looking to bring some poetic justice to those that would hold back people like him. If you’d stand in the way of the oppressed, Somnus will always be there, he’ll be your worst nightmare, and enjoy it. 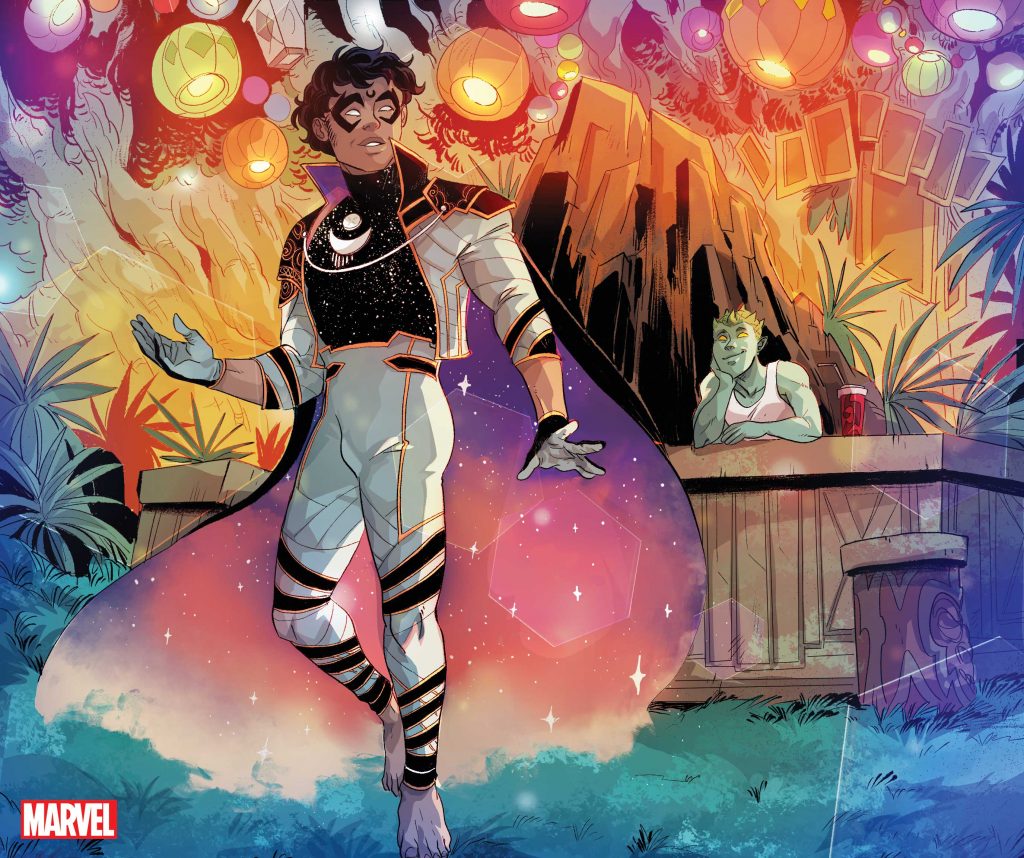 Art by Claudia Aguirre from the Somnus story in Marvel’s Voices: Pride #1!

KAPLAN: One aspect of the character that I really like is that Somnus has something of a pre-existing “secret history” in the Marvel Universe. Why is this such an integral element to include when working on queer rep?

ORLANDO: I think in Somnus’s case, it’s integral to making him not just an example of queer representation, but of multidimensional character building. We’ve seen an expansion of queer representation, though there’s always more work to do. But Somnus is there to add new depth to mutants and LGBTQ+ folks living in the present, who can sometimes forget the struggle of those that came before. It’s a nuanced take, it’s a unique perspective, and it’s one I’ve learned myself, living in a neighborhood with older LGBTQ+ folks who lived through the 70s and 80s, and coming to realize how lucky I was to come of age in the present moment. Somnus is an homage to them, their struggle, and the heartbreaking compromises so many of them had to make.

KAPLAN: Representation is essential! When was the first time you first felt you could see yourself on the comics page?

LUCIANO VECCHIO: When I was a closeted kid, I connected with sensitive queer coded characters like Jericho in New Teen Titans or Andromeda Shun from the anime Knights of the Zodiac, very popular in Latin America. But then Wiccan and Hulkling appeared around the time I finally came out and was living my first love. I always was a magic enthusiast and comics geek so getting to know them was the closest I felt to seeing myself in a superhero and that’s why I love them so much.

Frame variant cover by Luciano Vecchio, featuring many of the LGBTQ+ heroes from Marvel Comics.

KAPLAN: Somnus is a new character, but he’s part of a decades-long ongoing story (not just that of the X-Men and the mutants, but of the whole Marvel Comics universe). What goes into balancing the new elements of a character against the existing canonical foundation?

ORLANDO: With Somnus, the good news was that for most of his life he was the man on the ground, witnessing the majesty of the Marvel Universe with an everyman’s perspective, like Phil Sheldon in MARVELS. In fact, he probably grew up around the same time as Phil, but in Somnus’s case, he had a secret. In fact, he had two: he was gay, and he was a mutant. So for a long time, Somnus watched in-story as Marvel Canon evolved, but always from the sidelines. That’s a great opportunity, because now that he’s been reborn, he finally gets to step off the sidelines and take part in all the wonderous moments he only dreamed about, before. And that enthusiasm, that excitement about being part of the wild superpowered world of the Marvel Universe, is something that lets us reference what’s come before with a new lens but also easily slide seamlessly into the adventures to come.

KAPLAN: You mentioned in the Somnus announcement on Marvel.com that Somnus’s story is inspired in part by your own family history. May I ask if you could elaborate on this aspect of the character’s inspiration?

ORLANDO: Carl’s backstory draws from multiple family threads, all the while elaborating them for a world where mutants exist, and superpowers thrive. I’ve had family members during the Vaudeville era who compromised their sexuality, if not outright denied it. I’ve had family members from the Baby Boom do the same. And as well, I have large portions of my family from a blue-collar Italian background, where the parents were lost too young, and other family members has to step in and raise the surviving children. The choices folks in generations past were often forced to make were heartbreaking ones, quite commonly, and with Somnus, we wanted to reward that struggle with a bit of wish fulfillment, and a fresh start in Krakoa’s utopia. 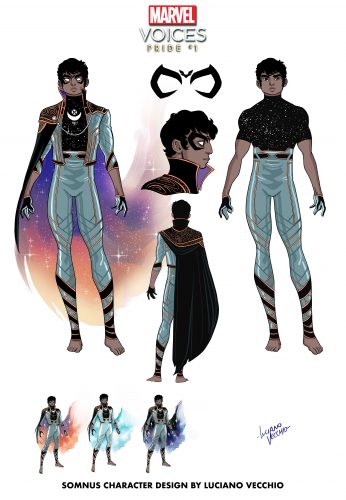 KAPLAN: Can you tell us a little bit about what went into designing the incredible outfit worn by Somnus? And a related follow-up: has the work Russell Dauterman done on the Hellfire Gala permanently altered the fashion landscape in the Marvel Comics universe?

VECCHIO: Russell’s work and the Hellfire Gala event and design trends it generated sure has made waves, hopefully lasting! His influence and also that of my other favorite costume designer right now, Valerio Schiti, are definitely present in my Somnus design. I like to imagine we all are channeling Jumbo Carnation.

Other than that I worked very intuitively from the notes I got from Steve and editor Sarah Brunstad: A mix of mod fashion, a silver-based palette, asymmetry, and I added the changing cape interior, etruscan vase inspired ornaments and the tiny wings in his forehead are nods to the god he’s named after, and for some dream-logic reason, wearing gloves while barefoot seemed to work for him.

KAPLAN: In addition to designing Somnus, you also created a “Frame Variant” based on the circa 1985 Marvel 25th Anniversary covers, featuring Somnus and many other LGBTQ+ Marvel heroes. Was there any hero you were particularly excited to be able to include on this variant?

VECCHIO: Mostly the Young Avengers crew and drawing them all together. And though we couldn’t fit EVERYONE in the frame I was happy to extend the first list to include Sera in it and I also wanted to draw Aaron Fischer, the Captain America of the Railways, who had just been announced when I started working on it. But I have to say all of them, each one is important. I’m such an archivist nerd and I was able to fit even more characters in the intro story I wrote and drew for the anthology, revisiting iconic moments of the queer history of the Marvel universe.

KAPLAN: Is there anything else that you’d like me to be sure and include?

ORLANDO: I’d just note how wild a moment it is, to even have a book like MARVEL’S VOICES: PRIDE, and for me, the kid who wrote to Stan Lee on notebook paper in 1995, to be part of it. It’s an honor to not just add to the tapestry of Marvel’s mutant history, but to do so by elevating a story not yet shown in mainstream superhero comics, one that wouldn’t be possible without the work done to reinvent and reposition Krakoa by so many amazing creators. I couldn’t be prouder of the rich, unique backstory we created for Somnus, or to have the chance to debut him and tell his story with Luciano and Claudia Aguirre. Carl, Somnus…he’s one of the richest characters I’ve been part of creating, and I can’t wait to tell more stories with him. But even more than that, I couldn’t be more excited to be part of a book that I know would’ve had immense affected on me, had it existed in the 90s. I could’ve used this book as a kid, even if not everyone in it was like me, but to know that the community as a whole was beckoning with an open hand.

Check out the Prism’s interview with the editor of Marvel’s Voices: Pride #1, Sarah Brunstad, by clicking this link!