The Complete Leonard & Larry Collection by Tim Barela, available now from Rattling Good Yarns Press, collects every single Leonard & Larry strip. From their first appearance in Gay Comix through their appearance in The Advocate and Frontiers magazine – plus the strips in the Mountain Man series, and the never-before-seen Grizzly ‘N’ Ted series – this collection is a must have for any fan of the legendary Barela’s work. Prism got the chance to interview Barela over email, and we asked all about how the comics landscape has changed since Leonard & Larry first began publication, whether or not getting a full page for the strip in The Advocate and Frontiers, and it means to be a forerunner of the modern queer comics landscape!

Avery Kaplan: What was the comics landscape like when Leonard & Larry first began publication in 1984?

Tim Barela: It’s the not easy to remember how things were that far back. When I started doing L&L, it was a sideline. Mainly, I paid attention to the motorcycle magazines I was already contributing to at the time. As far as Queer comics go back then, there were lots of coming out and self discovery stories being published. And always politics. The gay community, a relatively short time after Stonewall, was still in the midst of defining itself and how it related to the rest of society. And that was reflected in comics. 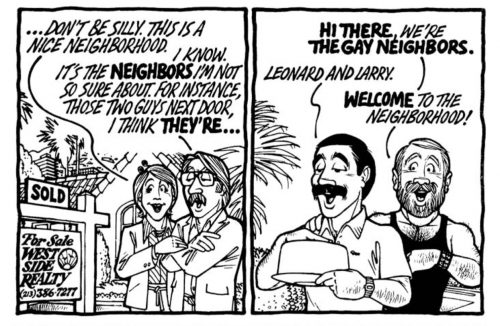 Kaplan: As mentioned in the foreword by Charles Solomon, both The Advocate and Frontiers magazine gave Leonard & Larry a full page. How did this affect the development of the comic?

Barela: Having a full page to fill with cartoon art was a tremendous advantage. And eventually, when I got to sit down with big name cartoonists who had syndicated newspaper strips and limited space to deal with, it was amazing to realize how envious they were of my situation. But it was an embarrassment of riches, almost too much space to play around with. There was lots of room to indulge in filling panels with detail. And for me of course, too much tempting space to fill with dialogue balloons overflowing with verbiage. I look back at some of it now and wish I’d been more restrained. Brevity being the soul of wit, or however Shakespeare put it. But then, I like to talk, and so did my characters.

Barela: I have no idea what goes on in Hollywood anymore, or how it relates to the Gay community. I haven’t lived up in the LA area for over 30 years. I haven’t even traveled up there in over a decade. But from what I’ve seen on TV and in the movies recently, it seems that the relationship between Hollywood and Queer culture has improved. It’s certainly better than how things were when L&L was newly published. I was always told that numerous entertainment executives either saw my cartoons or had copies of my old books in their offices. Whether on Broadway or in Hollywood, though mostly behind the scenes, gay people have always been the backbone of the entertainment business after all. Whenever I used to visit a leather bar up in LA, it was always safe to assume that a great number of the other patrons, at any given time, were associated with television or the movies somehow. At least our presence in Hollywood is no longer as much of an embarrassment to the old guard. Moonlight recieved the Best Picture Oscar and was openly celebrated just a few years after the industry was in denial and chagrined by their snub of Brokeback Mountain, for instance. But as far as Hollywood and the storytelling in my cartoons was concerned, well, L&L did take place in Los Angeles. The entertainment business has always had an overwhelming presence in that town and was ripe to exploit as a vehicle in my comic strip. 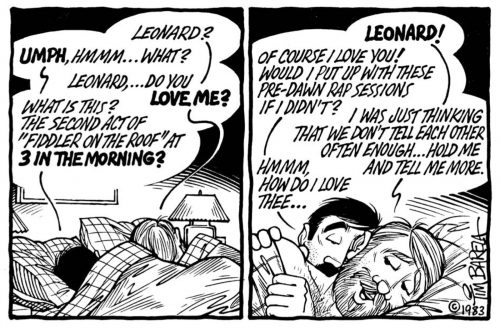 Kaplan: As noted in your introduction, this collection includes the typos and blemishes for which (in your words) you have been notorious for throughout your career. What made you decide to keep these bloopers intact in this collection?
Barela: Not correcting bloopers was simply expedient. There are over 360 pages of my cartoons in the new collection. Pages overburdened with my verbosity and excessive punctuation. It would have been a monumental excersise to go over everything and make corrections. And nonetheless, you always miss something. Lots of things. So, leave well enough alone. I’m in good company, after all. Berk Breathed has poked fun at himself and his editors’ frustrations with his spelling errors. May as well not pretend. I’m a lousy speller, always have been. But then, the English language itself is at least partially to blame. It’s always breaking it’s own rules. I before E, except after C and on and on, and so many other examples. Unlike other people, I’ve never been good at simply remembering all the inconsistencies. These days however, now armed with a modern tool like autocorrect, I can promise that I’ll do much better in the future.

Kaplan: This collection also includes the four Mountain Man strips that you created in 2003 for a local interest publication in Wrightwood, California. While it hadn’t been widely seen outside of Wrightwood, I’m curious what the local reception was like (beyond its shortsighted premature cancellation, of course)?

Barela: I was never really aware of the local reaction to my Mountain Man cartoons up in Wrightwood back in 2003. No one passed on feedback, if there was any. I have much less acquaintance with that mountain town than anyplace else, locally. Back in the day, it was always just somewhere I rode my motorcycle through. The friend who asked me to draw the strip did live up there, but I rarely visited. Of course, there were only four episodes of MM and it never had an opportunity to establish an audience. A real shame. I designed the Snowmam character to become sort of a town mascot. But he never got a chance.

Kaplan: You mentioned in pre-interview correspondence that you recently spoke with The Bay Area Reporter, and now are obviously being interviewed by Prism Comics. Has your work always enjoyed this level of press coverage? How has the experience changed (or remained the same) since Leonard & Larry began in 1983?

Barela: Back in the beginning, Leonard & Larry had practically no press interest, whatsoever. In 1984, and for years afterwards, the Gay community and Queer comics were all about angry politics and making statements. My cartoons were considered shallow and frivolous, “sitcommy” and not to be taken seriously. I remember in the early years, trying to promote L&L and some project at the time. A friend suggested that I should contact an LA area, late night, gay themed radio show on a very left end of the dial, progressive station. Perhaps they’d be interested in doing a story about me and my cartoons. In those old days of answering machines, I left a message. And I never got a call back. They simply weren’t interested. But when you think of it – and not to suggest by any stretch of the imagination that I could ever be in the same league – even the music of Mozart was considered to be lightweight stuff not long after his passing and well into the Nineteenth century. What a difference the passage of time makes for belated appreciation. Mozart is now considered to be a towering musical genius. And at least as a mere cartoonist, I’m still alive to enjoy a modest amount of reconsidered attention.

Kaplan: As one of the forerunners of the modern queer comics landscape, how do you view your role within the queer comics community? How do you hope to see Leonard & Larry remembered in the years to come?

Barela: I don’t really know what my role in the Queer comics community is anymore. After all, I’ve been apart from it for too many years. Another queer cartoonist, Jeff Krell, ironically also lives out here in the boonies, just a few miles up the freeway from me. Jeff has always been much more active and involved with the whole Queer comics scene than I ever was. He tells me about talking with mutual friends, at the San Diego Comic Con, who have openly wondered if I was even still alive. Well, as they’ll all be able to see, I am. The new book confirms as much. But how I’d like to be remembered? Positively, I hope. Ultimately, no one has control over other people’s opinions. Art and humor, and everything positive and negative, is in the eye and mind of the beholder. It may have taken a while, but maybe the Fates will cut me a break and favor will eventually shine down on my work. Maybe my harshest critics will come to see the errors of their ways. Maybe. Only time will tell.