Prism Comics got the chance to interview Ciriaco and Blas over email to find out all about what inspired the comic, how the pair of creators first met, and how it compares to write a comic as opposed to drawing one! 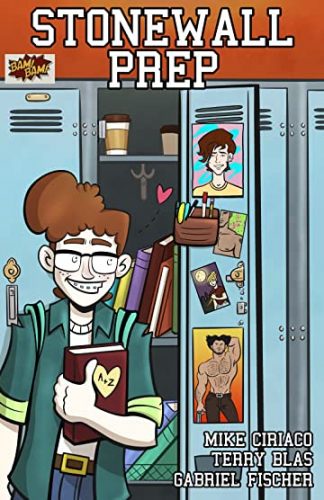 AVERY KAPLAN: What was the genesis of Stonewall Prep?

MIKE CIRIANCO: The story actually started as an animated pilot I wrote back during my Second City days. Back then I was an improv cast member there, and I wrote for a couple of sketch shows there. In my 20’s, I realized I wasn’t like the typical superficial WeHo boys. I fully embraced my gay geekery. I noticed that the biggest bullies I encountered weren’t homophobes, but other cunty-ass aging twinks. (I used to refer to them as Twas, the past tense of twink, but once that became a mainstream term, I just ended up calling them twaggots). This was kind of a ‘What If’ my nerdy teen self ended up in a gay school. Then, Prism Comics and WeHo Arts announced they were producing a queer comic book anthology, so I adapted the first act of the script into a short comic. I met Terry on a panel at Drag Con a few years early. I adore him, and his art, so I was so grateful he had time to draw Stonewall. 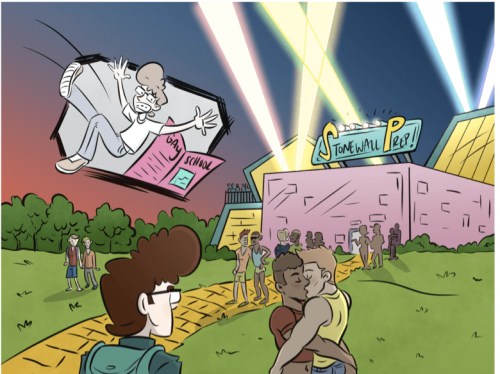 KAPLAN: I laughed out loud at “Logan Paul Memorial High School”… and then at a lot of jokes after that. Do you each have a personal favorite joke or reference from Stonewall Prep #1?

CIRIANCO: I really liked everything with Hayden Christensen. He was such a terrible Darth Vader, I don’t mind knocking him around a bit. In fact, the Rachel Bilsen line was a late joke that I hope lands. It’s also a litmus test of my reader’s age. If they get it, they are millennial. If they don’t, they are either too old or too young to have ever watched the OC, and her other projects such as… um… well there had to be something else, right?

KAPLAN: Do you wish that you could have attended an all-LGBTQ school?

CIRIANCO: Oh definitely. I was the first openly gay kid in my high school in the 90’s. It was an interesting decade. Homosexuality was overt, yet homophobia was still socially acceptable. I came out in a conservative New Jersey High School, so I quickly learned that I had to physically defend myself. Fortunately, I’m very confrontational, and very good at handling myself in a fight. (I always joke, I’m a gay Italian boy from Jersey, so I’m already sexually attracted to fistfights lol). When I first came out, someone punched me in the face, so I punched him back so hard I broke his nose. After that, no one touched me. My sister was a few years younger, and she told me the kids that came out afterwords always said it was easier for them since I already paved the way for them in our school. One of her friends who actually escaped a conversion therapy camp told her I’m the reason he’s still alive. Honestly, my goal was just to survive those 4 years, but it’s good to know those hardships actually helped others.

KAPLAN: Why was it important to name the school “Stonewall Academy”?

CIRIANCO: It took me a while to figure out what to call the school. There was a couple of iterations before I landed on Stonewall Academy. It was Terry’s suggestion to name it Stonewall Prep, an homage to PrEP. I love that its a built in joke from the get go.

KAPLAN: Why is nerd culture so closely aligned with LGBTQ culture?

CIRIANCO: I actually explored this while I was covering Comic Con for Frontiers Magazine a while back. I think it’s their parallel developments. Both queer and nerd cultures were highly taboo in the 80’s. But by the 2000’s, both started crossing into the mainstream. Every blockbuster and streaming series is an adaptation of a comic book. Same sex marriage was once a huge wedge issue, now it’s pretty much socially acceptable across the country. They have such similar cultural arcs, its not surprising how often they intertwine.

KAPLAN: Was there any character that posed a particular challenge in designing the aesthetics?

TERRY BLAS: I wouldn’t say they were difficult but Darcy and Zac were characters I really wanted to get right. Whe nI joined the project I was provided with sketches done by another artist but I wanted to make them my own because of their importance to the story. Darcy has so much attitude and she becomes Adam’s friend, while Zac is the boy he has a crush on.

KAPLAN: I recently interviewed you about writing a story for Marvel’s Voices: Pride. Can you tell us about how the process of writing a comic differs from drawing a comic for you?

BLAS: Drawing a comic takes much longer. Ha! At least for me. I can write a script fairly quickly if I have my idea planned out, but yeah, drawing a comic involves more especially when drawing a script that you yourself didn’t write. I love to draw, but when it comes to comics, I prefer writing.

KAPLAN: Are there any comics (or any other kinds of stories) that have been especially inspiration for you lately?

CIRIANCO: I’m loving Hickman’s run of Uncanny X-Men. I’ve always liked the runs where they weren’t just a team, or a school, but a larger culture. My entire adult life, I’ve lived in a world where so much of the fucked up shit with which we have to deal is from decisions made by the previous generation. So, I love how pretty much all the mutants got together, Xavier, Magneto, Apocalypse, Sinister, every once warring faction, they realized they had more in common with each other than with the humans, so they rejected the society that marginalized them and worked together to build a better society of their own. There’s a lot to learn for that, especially with the queer community. Why follow other peoples rules when we can make something better? Plus I love that all the mutants now fall somewhere on the LGBTQ+ rainbow.

KAPLAN: Is there anything else you’d like me to be sure and include?

CIRIANCO: Be sure to check out Stonewall on Comixology! And follow us on social media: