In the series Alice in Leatherland by Iolanda Zanfardino and Elisa Romboli, published by Black Mask Entertainment, children’s writer and illustrator Alice has her life upended when she discovers that her fairy tale romance is not all it cracked up to be!

Heartbroken, Alice moves to San Francisco to start a new life… but what will happen when she arrives? Can she find a relationship that satisfies what she’s looking for?

Prism got a chance to interview Zanfardino and Romboli over email to find out all about the origins of Alice in Leatherland, whether or not the real City by the Bay provided any inspiration for the comic, why its important to combat prejudices against kink, and what it was like to include so many allusions to fairy tales in their story! 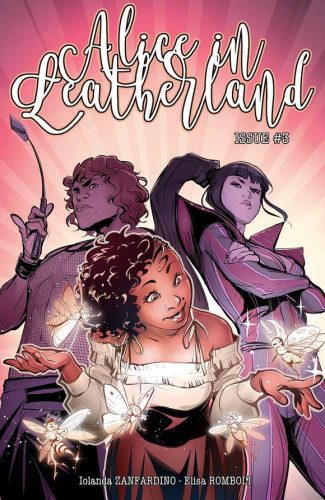 IOLANDA ZANFARDINO & ELISA ROMBOLI: Hi Prism Comics, we’re SO honored to be on your website! Thank you for this amazing opportunity, and for everything you do for queer creators!

AVERY KAPLAN: What was the genesis of Alice in Leatherland?

ZANFARDINO: I love telling stories, it has always been like a physical need I’ve perceived in my life, while Elisa has a tremendous talent as comic book artist! So from the very first moment we found ourselves working at home side by side, we dreamed of being able to do it together as a team on something of our own.

Plus, many of the events of “AiL” are inspired by real life events, that’s too bad we can’t say what they are!

KAPLAN: What was it like creating the characters? Did any part of the characters pose a particular challenge for you, including in terms of aesthetic?

ZANFARDINO: When I create characters it’s usually hard for me to “contain” the part of myself that I put into them. I hope it’s a recurring problem for other writers too! (haha)

With Alice I have tried to bring out all my self-irony, trying to show the comical side of my being “too romantic” on many occasions. On the other hand, giving life to Robin was much more difficult, we are so different! But I know that basically I ended up making her a softie after all!

ROMBOLI: As regards me, in terms of aesthetic, it was much easier to bring Robin to life! Androgynous aesthetic has always fascinated me.

As for Alice, it was a tad bit out of my comfort zone: I was not used drawing curvy girls so often (it’s unusual they’re the main characters in a comic script), but then I quickly felt at ease. Now I really love to draw her and her funny facial expressions! 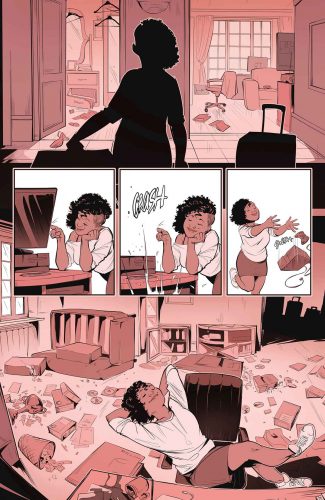 KAPLAN: Was it important for you to show that queer relationships do not necessarily have to be patterned after heterosexual relationships? Was showing this a conscious decision, or did it come naturally?

ZANFARDINO & ROMBOLI: We think it occurred naturally! The whole story was born with a lot of truthfulness and with the desire to make readers laughs for a few minutes. But also with the need for both of us to show what is the “reality” and the “everyday-life” of the queer world as we live it in our community.

We think authenticity in stories is very important!

KAPLAN: In addition to having romantic subplots, Alice in Leatherland also shows the importance of having queer friends. Was it important to you to include queer friendship in this story?

ZANFARDINO & ROMBOLI: Yes, it was! It’s nice that more and more characters in various media are openly queer, it’s fundamental. But we would also like to see more interaction and bonds scenes between different queer characters, not just between “the” queer character of the series and all the others who are cishet. However, while these are often beautiful stories of friendship, we think there is a need for representation for queer friendships as well! 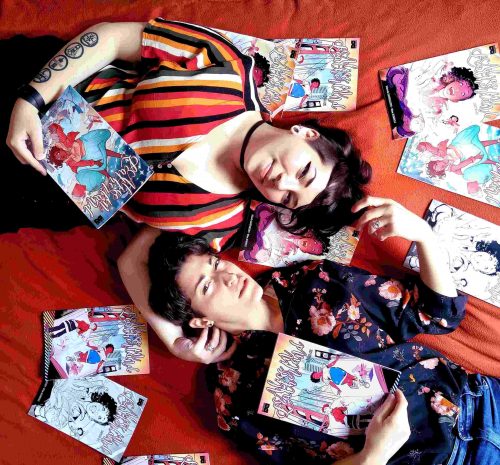 KAPLAN: Why is it important to show that kink can be part of a happy, responsible, and fulfilling life?

ZANFARDINO & ROMBOLI: There are still so many prejudices about people who integrate kink into their private and relationship life! We believe that’s not fair to make people feel “wrong” about it.

We should normalize, in the context of an healthy relationship, knowing well what you want and most importantly knowing how to communicate it to your partner, and enjoy it together!

KAPLAN: From the title onwards, Alice in Leatherland is filled with allusions to Alice in Wonderland and Through the Looking Glass. Did you have a specific allusion that was your favorite?

ROMBOLI: We had fun, in the creation phase, by filling the story with allusions to fairy tales in general: from different situations to all the names of the characters!

Then, in the drawing phase, I began to fill the panels with small Easter eggs and quotes, which I hope people will catch!

KAPLAN: What was it like depicting San Francisco? How did you capture the look of the Bay Area so well?

ZANFARDINO: I actually once lived in San Francisco as an immigrant, and it was a life-changing experience for me (and a powerful source of artistic inspiration as well)!

I love to say, “I left my heart in San Francisco.” 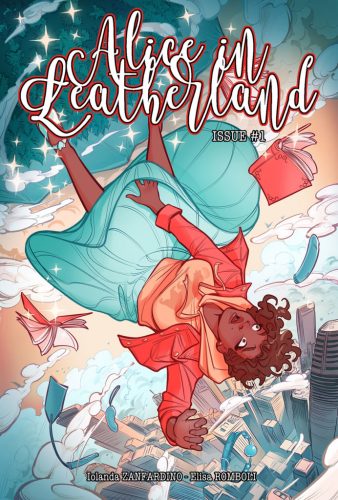 KAPLAN: Throughout Alice in Leatherland, we get pages out of Alice’s fairy tale. Can you tell us a little bit about how this element of the story – and the way it develops over the course of the series – highlights some of the important themes of the comic?

ZANFARDINO & ROMBOLI: We liked the idea of giving an “intimate” reading key of the events Alice lives, as if it were a diary made up of metaphors and simple visual images, through which she herself analyzes all of the changes shaking her life that she once considered so predictable.

In addition to assisting us with the comical and paradoxical side of the narrative, it also helped us to effectively summarize parts of the story that for reasons of space we could not go into as much as we wanted.

KAPLAN: Is there anything else you’d like me to be sure and include?

The concept of “Happy Ending” in stories is very important for us. We can’t avoid it!

It is the very moment we wait for when we create, Iolanda can’t wait to write the script of that part (and she always ends up crying with emotion on her computer!), while Elisa can’t wait to draw the pages!

We believe that the world is already a hard enough place to turn down a happy, sweet ending.

The first three issues of Alice in Leatherland are available now at your local comic shop, and issues 4 and 5 will be arriving later in July and in August.