Did you get a chance to pick up a copy of Marvel’s Voices: Pride #1? The Marvel Comics anthology is available at your local comic shop right now, and it features the story “Early Thaw” by Anthony Oliveira, Javier Garrón, David Curiel, and Ariana Maher.

Prism got a chance to catch up with Oliveira over email to find out more about which classic X-Men comic creators influenced “Early Thaw,” where the story fits in the mutant continuity, and what it was like to grow up with the character! 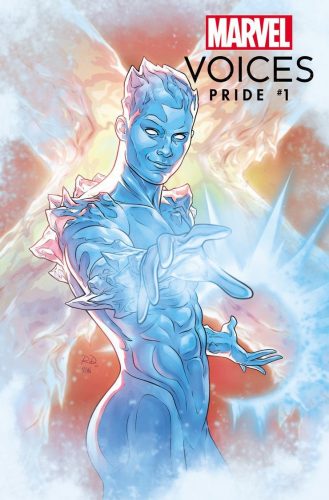 AVERY KAPLAN: Can you tell us about the genesis of this story?

ANTHONY OLIVEIRA: It is a story about the particular ache of gay first love – the rush of the feeling, and the uncertainty of what it might mean and what happens next.

I wanted to tell a story like Claremont’s Classic X-Men backups – a story that opens up a seam at a key moment in continuity and pauses to show what happened, the quiet breath, between, say, panels 3 and 4 of a story we all know. Here was something you might have missed – a conflict, a flicker, you didn’t notice between the punching and eyebeams.

Bobby’s history has always been before our eyes as a character but the nature of the closet (and publication forces) has occluded his journey – to the point that many readers (particularly hostile ones who don’t like seeing queer characters in comics) have missed or have ignored how long he has been telling this story.

So I drew up a list of all the moments when Bobby seemed on the verge of coming out to someone across all these decades – to Jean at the bookstore, to Jean-Paul, to his parents at dinner, to Rogue on the road – but it felt to me like the earliest moment was also the best and most earnest and most heartbreaking, and from which the others all flowed. The rest of the story came from that pathos that was really in Stan Lee’s story. 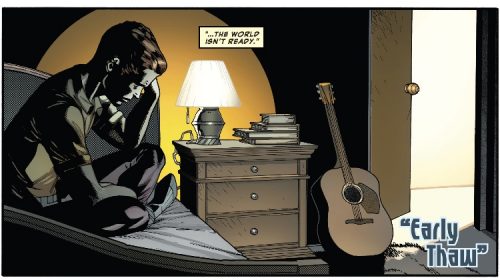 KAPLAN: Iceman has a long and singular history in the comics… including a somewhat complicated coming-out process (time travel)! What was it like to integrate the character’s history into this story?

OLIVEIRA: In a lot of ways it was easy – partly because I am a very huge Iceman fan, so the work is fun (and I am a huge archive dork whose brain is bad and loves research!), but also because this story comes before all that history – though I had to keep it always before our eyes, as it surely would be for the reader.

Continuity-wise, we are in the space in and around X-Men #14 – so Bobby is in the same mix of denial, uncertainty, hormones, and panic that he was in when Jean pulled the knowledge of his crisis from his mind (which of course neither of them remember). But the time travel has no material impact on this – this is just a familiar story, I think, for many young queer people: of falling in love with someone you’re not supposed to, and not knowing how to process those feelings or their implications. 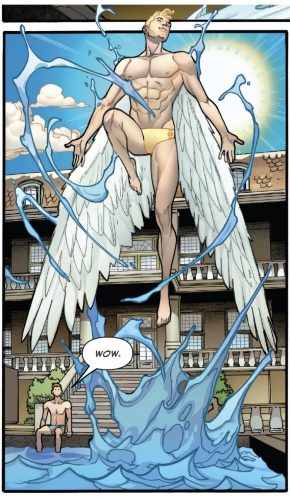 KAPLAN: In the guide to Marvel’s Voices: Pride #1 on Marvel.com, you mentioned that you related to Bobby’s character as a “painfully shy, painfully closeted kid.” Would you mind elaborating a bit about your personal history with the character, and why his story resonated with you so strongly?

OLIVEIRA: I say this a lot, but I knew Iceman was gay even before I knew I was gay. In the nineties when I was a kid reading comics Bobby spent most of his storylines trying to convey something to the people he loved, trying to process something unspeakable – to his disappointed parents, to the women he tried and failed to date, to his close friend Jean, to his untouchable road-trip buddy Rogue, even to Emma Frost once she had been inside his head and kept making “interior designer” jokes about him – something was bothering Bobby, keeping him locked from his full potential. Even if the writers weren’t allowed to say it, I knew what it was. Slowly I realized his story was my story, happening more or less at the same time.

I grew up in a very conservative household and school, and Bobby’s struggle (including, in the later years under writers like Liu and Austen where that struggle became self-destructive and harmful, shutting him off from his own body and feelings) felt very personal and familiar to me.

Bobby and I went through it together. 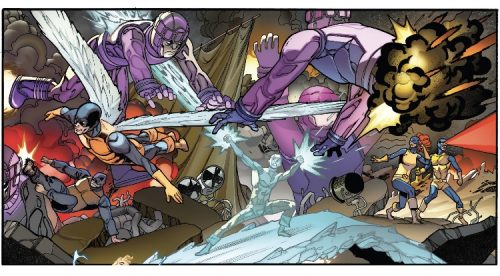 KAPLAN: I’ve been a fan of Javier Garrón’s art since I first saw his depiction of Devil Dinosaur trashing a Hydra camp, and from the preview pages, it’s clear that he’s brought all of his talent on a very different kind of story here. What was your reaction to seeing his art for this story?

OLIVEIRA: I was completely blown away. I think bringing him onboard for this was a genius move from editor Sarah Brunstad, and this kind of thinking is the mark of a gifted editor. I think, like you, I had seen his brilliant work before, but also like you I thought of him as a master of the chaotic battle scene – I was worried I would bore him! It was like a master action director delivering a pitch-perfect period drama.

His art on this story was a revelation. He manages some of those battles here too, but he also turned in pages of such beauty and sensitivity for this that I cried when I first saw them. Bobby’s plight and his interaction with the other characters here are so carefully observed. Javier’s skill in the fight scenes we’ve seen him do is I think actually the skill of a miniaturist – he reminds me of a Baroque sculptor, putting wild detail inside an acorn or the rim of a beer stein. It’s exquisite here.

KAPLAN: Was there any element of the story that presented a particular developmental challenge for you, or did it come together fairly easily?

OLIVEIRA: A lot of this story was about honouring continuity, and we tried to be as meticulous as possible. There are several technical feats quietly happening in this story, which I (in the grand comic writer tradition) completely and unreservedly assigned to someone else.

The first is the opening three panels, which are originals by Stan Lee and Jack Kirby which Javier has breathtakingly replicated. We also have Javier’s gorgeous homage to Jack Kirby’s iconic close-up on Magneto’s eyes from X-Men #1 (1963) upon his seizure of Cape Citadel, which Roy Lichtenstein so famously ripped off. Blending Kirby’s style with Javier’s, and mine with Stan Lee’s, was a weird tricky move, and letterist Ariana Maher (who is a genius) had to match lettering from Artie Simek, working sixty years ago.

The next technical feat I think is all the work happening here on the Xavier estate, which we pulled from the archives – the mansion, the poolhouse, Breakstone Lake, and of course – importantly, for this story – the N’Garai Cairn, here still intact before Cyclops smashed it. It was fun digging through the old “Survival Guide to the X-Mansion” from when I was a kid for that.

I wanted to ground us, not just in a particular moment in continuity, but in history, and in a particular fictional space that, at least for me as a kid, so captivated me. Javier knocked it so completely out of the park, for which I will be permanently grateful. I can’t wait to see David Curiel’s final colours! 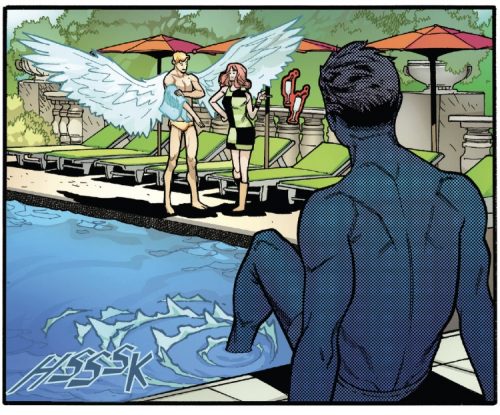 KAPLAN: Why is it so important to include the stories of legacy queer characters alongside newly debuted characters when it comes to anthologies like Marvel’s Voices: Pride #1?

OLIVEIRA: I think Bobby Drake really is a singular character in literary fiction because the accidents and pressures exerted on his journey have conspired to create a narrative that would basically be impossible to have designed: a character whose story arc emerged basically in actual real-time as a life-long attempt to come out of the closet, with all the associated traumas and scarring that journey inflicts.

I love and adore Wiccan and Hulkling, for example, whom I also work on – they are to me the world I wish to see, the characters whose coming-out journeys were sometimes rocky but also full of acceptance and validation. Those are important to see. Those saved me to see. And reading them when I was young and writing them now is healing – someone, at least, got to have that happy ending.

But it wasn’t Bobby’s journey, and it wasn’t mine, and I think Bobby (and some people reading, especially older readers or readers who, like me, come from more conservative backgrounds) also cannot help but regard stories like theirs and like new queer characters emerging now with a little envy. I think it hard, sometimes, to look at stories like Bobby’s – where your parents don’t accept you but you go on loving them, where the boy you loved found girls and moved on, where you look back on a life filled with missed roads and almosts. But he endures. That to me is very beautiful.

Legacy characters like Bobby, like Northstar, like Jessie Drake came of age when their stories were deemed “untellable”, and I think – understandably – stories of queer suffering, of surviving tooth and nail, are less en vogue now, both for publishers and readers. But they’re still stories important to tell. Our scars still matter, even if not everyone understands them, or finds them harder to look at or market.

KAPLAN: Thanks so much for answering my questions!

OLIVEIRA: Thank you so much for having me – I hope people find in this story some of the Bobby Drake I have come to love so much. He certainly deserves it.