Interview: All About GAMMA FLIGHT with CRYSTAL FRASIER

Have you had a chance to check out the first two issues of Gamma Flight? The series spun out of Immortal Hulk and is written by Crystal Frasier and Al Ewing, with art by Lan Medina, colors by Antonio Fabela, and letters & design by Joe Sabino. 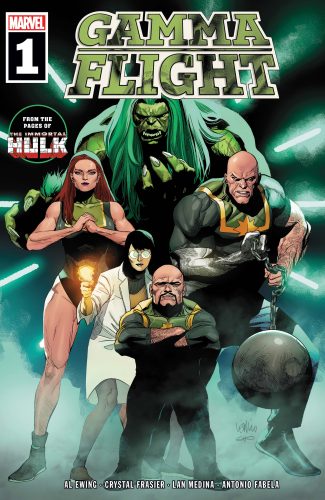 Prism Comics got the chance to interview Frasier, who also wrote one of the stories in the Marvel’s Voices: Pride anthology, over email. We asked about how she became involved in the story of Dr. Charlene McGowan, learned what it’s like to write a nuanced trans woman in a superhero narrative, and found out how Gamma Flight’s themes relate to Immortal Hulk!

AVERY KAPLAN: Can you tell us about the genesis of Gamma Flight? When did it become clear that this series would be spinning out of Immortal Hulk?

CRYSTAL FRASIER: Sadly, I cannot. I’m still very new to Marvel. While I’ve written comics for other publishers, I’d only ever done sensitivity reading consultant work prior to Gamma Flight. Wil Moss and Sarah Brunstad approached me about writing for Gamma Flight once the series concept was already fully fleshed out. I get the impression Al really liked working with me as a consultant and liked some of my writing from other companies and wanted to give me a shot at writing for Marvel.

FRASIER: In general, life as a consultant is pretty cool. You come in for a few weeks to a few months, read through a company’s project, and provide feedback, advice, and warnings. I’ve worked as someone who streamlines and develops projects—basically the publishing version of a “script doctor,” and also as a sensitivity reading for gay and transgender issues. Al had brought me in on Immortal Hulk for the second one—he wanted to make sure he was portraying Dr. Charlene McGowan in ways that weren’t just respectful, but also felt natural.

Working as a consultant with Al specifically was great. He’d obviously already done his research and yet was still extremely open to feedback and input. He’s a guy that naturally gets really excited about everyone’s ideas, and that’s always great to work with.

KAPLAN: What’s it like to go from consultant on Immortal Hulk to series co-writer on Gamma Flight?

FRASIER: It’s surreal. I’ve worked for a few major properties at this point and it never stops being weird getting to work on the other side of the screen/page. I grew up reading Marvel comics—She-Hulk, Fantastic Four, Spider-Man, Slapstick—but never really thought I’d be writing for any of those characters. Getting to write for Titania and Absorbing Man is definitely going to be one of the high points of my career. 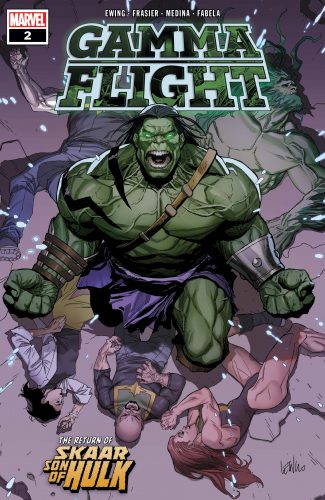 KAPLAN: One of the things I like about Dr. Charlene McGowan is the fact that she’s such a complicated character. What is it like writing a trans woman with a checkered past? Why is it so empowering to see a trans woman depicted as a flawed human being?

FRASIER: It’s honestly refreshing to write a trans woman who isn’t perfect, because earlier in my career that’s really the only space you could work with. It takes society a while to get over the “we’ll only accept them if they’re perfect” stage of representation—the sort of “model minority” stage—and stomach stories that are a little more nuanced. It requires more cultural literacy to tell a story about a minority character and not have that be read by the mainstream audience as representative of all members of that minority.

And the truth is, a lot of trans women do have spotty pasts. Not that we’ve all worked for a criminal kingpin, been arrested by a masked vigilante, and finally recruited to a secretive government thinktank, but in that a lot of us have been harassed by authorities or lost careers or sacrificed family in order to exist. There’s an element of “sacrifice for survival” in a lot of trans narrative—and that is usually both tragic and triumphant—but it’s rarely something we get to portray in anything but the simplest details. So getting to write a trans woman who’s allowed to be angry and imperfect, but still loving and nurturing, is amazingly liberating.

KAPLAN: As readers of Immortal Hulk know, the series is filled with body horror, and that element continues in Gamma Flight. Do you have any favorite body horror comics (or other kinds of stories)?

FRASIER: I’m going to sound a little pretentious here, but body horror doesn’t do much for me. Growing up trans means body horror is mundane for you. Going through the wrong puberty (or at least the wrong puberty for you) means that every day you wake up to your body being more alien in ways you don’t want and can’t stop. I certainly get the genre’s appeal; it asks a lot of compelling questions about humanity and identity. But when you’ve already had to face all those questions, alone, at 12… most related media sort of feels like stories you’ve already heard before.

But also John Carpenter’s The Thing is one of cinema’s all-time greatest horror achievements.

KAPLAN: Speaking of elements that continue from Immortal Hulk, the first issue of Gamma Flight does not shy away from explicitly addressing transgender representation alongside the genre elements of the story. Was it important for you to include these themes in Gamma Flight?

FRASIER: A lot of Gamma Flight is about recovering from trauma the way Immortal Hulk is about surviving trauma. Charlene’s trauma stems a lot from how badly her transition derailed her life—transitioning cost her a good job and a lot of her friends, which lead to her substance abuse problems and getting involved with Kingpin, which landed her in prison and eventually in Shadow Base—so it was important to show up front that being transgender isn’t something she’s shy about or ashamed of. Admittedly, the art for that scene came out a little more melodramatic than we had written. But any time it comes down to a choice between clumsy-but-overt representation or subtext, well, as the wide man once said: I have known writers who use subtext and they are all cowards.

Hopefully someday I’ll get the luxury of cowardice.

KAPLAN: Another aspect of Gamma Flight #1 that really stood out to me was the relationship dynamic between Eugene Judd and Rick Jones/Del Frye. I’m curious if there was any particular inspiration for this very nice depiction of Puck being such a good caretaker for his teammates?

FRASIER: Al is definitely the Puck expert of our little duo; Puck was the one member of the team I came in knowing very little about and needed a crash course to learn how to write. But for me it feels like it comes from a place of experience and empathy. He’s very much “the only adult in the room” for this team most of the time, and right now that means letting his emotional intelligence shine to make up for the rest of the team not being great at communicating. That’s particularly great for Rick and Del, who are really struggling with basic things like communication in their new conjoined state.

If we’re stepping away from in-canon explanations, for me personally, I’m a sucker for “loving father” narratives. Poor Del Frye had a real piece of work father, and part of me just wanted to give him a patient, encouraging father-figure now that he’s starting to turn his gamma-irradiated life around. 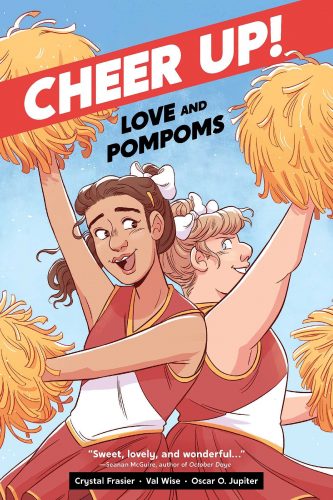 KAPLAN: Is there anything else you would like me to be sure and include?

FRASIER: I just want to say how cool it was getting to create a new gamma mutate for Marvel and add a new character to the official lineup. Stockpile was great to write and I hope fans love her weird, gross powers as much as Al and I do.

Also, I do have a YA graphic novel coming out August 10th called Cheer Up! Love and Pompoms. It has very little body horror in it—practically none, unless you count pushy teenage boys—but it has a lot of snappy banter and young cheerleaders falling in love.

Two out of five issues of the Gamma Flight series are currently available at your local comic shop, with #3 arriving Wednesday, August 18th, 2021.