We’re now a full year into DC Comics’ “New 52” relaunch, and many fans are divided over whether or not it was a good idea. Some feel it disrespects the lengthy, rich history of the DC Universe by throwing out everything that came before and starting over virtually from scratch. Yet none of us can deny that sales of the New 52 titles were (at least initially) strong enough to give the entire comics industry a much-needed shot in the arm. Love it or hate it, this risky endeavor on DC’s part has proven to be successful in one way or another.

For a lifelong DC enthusiast such as myself, it makes me sad knowing that many of the stories and characters I’ve enjoyed throughout the decades no longer “count” for anything. Since superheroes in the new DC Universe have only been around for the past five years, previous concepts like the original Teen Titans and the original Crisis on Infinite Earths never happened (at least as far as we know). Still, I’m willing to let the past be the past and allow myself to look to the future, and while far too many of the New 52 books have been less than overwhelming, there are a few that have drawn me in enough to get me at least a little excited each month. Wonder Woman under Brian Azzarello’s guidance has definitely been aces, as has been Scott Snyder’s work on the core Batman book and the dynamite team on Batwoman. Flash, Aquaman, and Green Lantern continue to entertain, while my all-time favorite, Justice League, has been hit and miss.

But it’s within the dark corners of DC where I currently find myself drawn the most. A few months before last year’s relaunch, the company decided to bring Swamp Thing back to the “primary” realm where Superman, the Justice League, and all of the other mainstream heroes resided. Not only that, but John Constantine came along, too. Jump ahead a couple more months to the end of Flashpoint. We discover that every character that had originally been introduced in the mainstream DCU but had been migrated to a more “mature” subsection was now back where they started. Yes, I’m talking about the reintegration of DC’s “Vertigo-ized” heroes, and I for one could not be any more ecstatic. 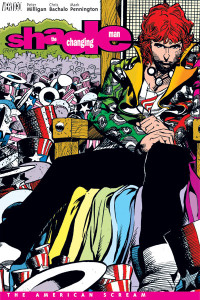 Next year will be the twentieth anniversary of the Vertigo imprint’s creation. Back then, DC was looking to attract mature readers by telling stories that didn’t have to adhere to the then-active Comics Code, and they already had several titles that fit that description. The company felt it was a good strategy to establish a new line for these titles in order to help readers differentiate them from the more “all-ages friendly” superhero line. Books like Swamp Thing, Animal Man, Doom Patrol, Shade the Changing Man, and Neil Gaiman’s amazing and groundbreaking Sandman were among the first batch to make the switch, establishing Vertigo as an impressive offshoot.

Most of these titles constituted the bulk of my comics buying throughout the ’90s. In fact, the owner of my local comic shop often referred to me as “The Vertigo Guy.” Like a moth to a flame, I’ve always been drawn to the dark nature of storytelling, and Vertigo offered darkness aplenty. It was a level of sophisticated and intelligent storytelling that I rarely found in regular superhero books, and it constantly provided me and my friends with a strong basis for intricate philosophical discussions.

So here we are, two decades later, with the DC Universe being restructured yet again for a new generation. Both Swamp Thing and Animal Man are back in their own books, yet this time they are firmly connected to the rest of the superhero world. As part of a grouping called “The Dark,” they have been joined by the medieval Demon Knights, the quirky Frankenstein, Agent of S.H.A.D.E., the horrific I, Vampire, the upcoming new Amethyst series Sword of Sorcery and a new Phantom Stranger, and—what is quite possibly my very favorite New 52 series—Justice League Dark. 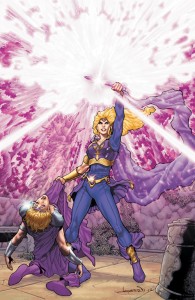 Justice League Dark is a dream come true for me: a motley crew of occult-based characters joined together to combat the demonic forces that plague our world and beyond. John Constantine is there, along with Deadman, Black Orchid, Madame Xanadu, and my longtime comic-book crush, Zatanna. Granted, most of them have been “updated” to New 52 standards in origin and appearance (Zatanna herself looking like a cross between a wannabe Goth and a Victoria’s Secret model), but the core Vertigo foundation remains intact: magic, mystery, and metaphysical mayhem.

Despite the reintegration of Vertigo’s original denizens, the imprint still exists as its own entity. But you won’t find any of its current offerings on my pull-list. Today’s Vertigo does publish some well-written and well-received books, but they’re mostly creator-owned, self-contained stories. It’s not the same as “my” Vertigo from twenty years ago, a bright, optimistic era in comics that helped shape me into the man and the writer that I am today. No matter what the future holds for the rest of the DC Universe, as long as The Dark continues to shine, I intend to stick around.