“The Weddings That Wrecked the Legion!”

FROM THE DIARY OF CLARK KENT

Back from the 30th Century and another adventure with my pals in the Legion. This one was a real corker. Thanks to a neat plan cooked up by Brainiac 5 and Saturn Girl, we flushed out a gang of spies who were the advance force for a planned invasion of Earth. Imra had sensed some super powered creeps were plotting against us, but they shielded their thinking before she could figure out who and where they were. She and Querl clued everybody in on their strategy, which hinged on Imra marrying Lightning Lad and Ultra Boy getting hitched to Phantom Girl. Married folks aren’t allowed in the club, so that meant they had to resign. My two buddies reckoned that the spies would apply to join the Legion to fill the vacancies. At the try outs, Chameleon Boy’s telepathic pet Proty II sensed which ones were shielding their thoughts, so we voted the phonies in and let them find the fake Plan-R for Earth’s defense, which they took back to their home world to decode, with us following in hot pursuit. We mopped up lickety split once Element Lad converted the super pills that gave them their powers to something that just made them dizzy. Then Mon-El and I busted up the super computer that was making the pills. End of story.

Now, I’ve got to find Pete just the right gift for Valentine’s Day. It has to be something really special. Mon-El and I renewed our “relationship” while I was in the future, so I feel a little guilty. I think that Pete suspects, but he’s such a swell guy that he never lets on. Watching the fake Legion weddings got me to thinking about what it would be like if Pete and I could tie the knot. “Clark Ross”. That has kind of a ring to it. Say, I just thought of something. Can guys like us get married in 2936? It’s funny that I can’t seem to remember anything about that! 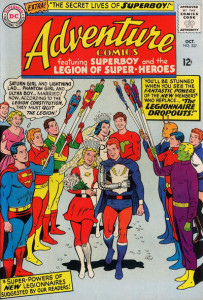 Another case successfully concluded. Imra was surprised when I suggested the bogus weddings. I could not tell her that ritually formalized carnal connections have been much on my mind of late. Superboy! How I long to take him in my arms and ask him to form a legally recognized sexual bond on a contractual basis to be worked out between us. But, he comes from the Dark Ages when such an arrangement was entirely out of the question. Besides, the surviving records from his period indicate that he is completely “straight”, as the backward people of that era phrased it. We have carefully shielded him from the facts regarding the sexual mores of our time. He knows that we erase information regarding his future life from his memory before he returns home, but he does not realize how many small details of our daily life we delete as well. If he could begin to piece them together into an integrated picture of the various types of government registered partnerships available to us, he would probably be so shocked that he would never return. How could I go on without even his Platonic company? My friendship with his cousin Kara would help somewhat. They are much alike in ways beyond their similar costumes. If I had never met him, I might well have decided to attempt at least a provisional pair bond with her. After all, she is from the “Swinging Sixties”.

FROM THE DIARY OF IMRA ARDEEN

Garth says that this date was thought by the ancient Euro-Americans to be especially suited for sexual activity. They would exchange brightly colored pieces of pulped wood on which were printed the specifics of the giver’s preferences. The records are fragmentary, but apparently, if the recipient was “into” what the giver requested, they would then smear themselves with an aphrodisiac called “chocolate” and couple in a special flower filled room known as a “hot house”. That certainly doesn’t “burn me on”, as they would have said. When Garth and I orbit, we prefer normal, plain, ordinary sex in the standard zero gravity field with computer generated hologram helpers. Just as nature intended!

FROM THE JOURNAL OF LAR GAND

Another great time with Kal. We went at it like a couple of Venusian Rut Monsters. The asteroid belt will never be the same again. As usual, he made me promise not to tell anyone. His antique customs are so funny! Also as usual, he was a big help in our latest adventure. But we couldn’t have done it without Element Lad. As a “Thank You“, I’ll have to be even more creative the next time we get together on Sunday. But, since it’s Thursday, tonight is Colossal Boy’s turn. Ultra Boy is taking Phantom Girl to the Pleasure Pits of Pluto tomorrow night, so I’ve asked Chameleon Boy if he’d like to fill in for him with me, since Reep isn‘t seeing anyone. Then it’s back to the usual schedule on Saturday with Fire Lad and Polar Boy. Talk about blowing hot and cold! On Monday I’ll pay my weekly “training” visit to the Science Police barracks. Then on Tuesday it’s off to the bars of Bismoll with my pal Night Girl. Those Bismollians can’t seem to get enough of me! I’ve kept Wednesday open. There’s a chance the UP Space Fleet will be in!

Why would anyone want to get married? Who could be so obsessed with someone else as to want to tie himself down like that?

FROM THE ROYAL ARCHIVE OF CHAMISTUS XXII, EMPEROR OF THE PROTEANS

Reep, my adored Chameleon! Why do you torment me? I have left my people, allowed you to call me “Proty II” and kept silent when you refer to me as your pet. What more do you want? Although I have never dared to tell you, I love you so! Be mine!

Ed Natcher has always wondered why, if love and marriage go together like a horse and carriage, it’s so hard to have a stable relationship.