“Fronting For The Holidays”

When human disaster strikes anywhere in the world, the fallout will surely be invaded by the Salvation Army. One of the most efficient charities charitizing today, the Es-Ay can be depended on to start dispensing food, shelter, and good vibrations before FEMA even pops its first tent. The Holiday Season is when the Salvation Army’s most conspicuous fundraiser efforts take shape, as nearly every urban corner all around the world is annexed by a broad-grinned, crimson-bibbed volunteer soliciting kettlecentric small change via copper-peppered soundwaves. Sometimes, these smiley soldiers hit the streets dressed as the patron saint of Gentile patronage, Santa Claus, and boy-howdy, how the donations then roll in. But don’t be fooled: despite the good works, beneath that red fur beats the squirmy heart of hate.

Slightly crasser organizations have also wielded Santa’s rep for gregarious magnanimousness as a tool for pounding money out of marks, as evidenced by Adventure Comics #82, “Santa Fronts For The Mob.” Within its yellowed pages, a bankruptcyphobic store owner, F. P. Miller, is approached by a skeevy mobster who offers the services of a “real live wire Santa.” Despite the risk of two singed eyebrows and one porcupine pompadour, Miller accepts the proposition, believing that an electric Kool-Aid Kringle-loo is his last best hope for preventing his debits from becoming to creditty.

In the second half of what quickly proves to be a double deal, the same skeev approaches an expert on fronting–a child-hating, cop-evading professional wrestler named Mountain Man Bearde–and, after swathing him in a swadling, red-and-white pelt, hires him as an Ersatz Santa. The skeev then subleases Bearde’s faux Santarific services to Miller’s Department Store. 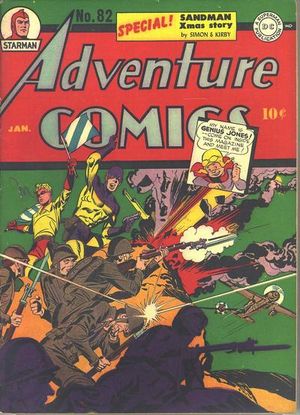 That’s a perfectly jiggy scam all by itself, ‘s’true, but it’s only Phase 1. An even jiggier skeev-and-jive is unveiled when “Santa” unknowingly serves as a kind of caser: the skeev secretly notes when rich kids are being debriefed on Santa’s Magic Lamp by the bearded Bearde so that the skeev can follow them home and debrief their parents’ fiefs.

yyrnishing this mutli-tiered skeeviness is the advent of socially-awkward, eccentric kajillionaire Mitt Romne*…uh, Wesley Dodds who toy-shops at Miller’s for the chilluns of Suicide Slum. Studying the Santa Line, Wesley discreetly identifies “Santa” as a child-hating, cop-evading professional wrestler named Mountain Man Bearde, this identification ability being one of the many happy side effects derived from clip-clopping over urban rooftops like Blitzen on geep.

See, Dodds moonlights as a perennial Presidential candidate seeking the Republicant nomina*…uh, as a long underwear hero called the Sandman. In this persona, Dodds would eventually lose a lot of weight and melanin and fight criminal elves in the 1990’s while utilizing pretension terms like “after a fashion” a lot, but, for now, he wears purple-and-yellow spandex, accoutered by a gas gun on one hip and a teenage boy on the other.

Sandman and Sandy the Golden Boy follow Bearde from the store on suspicion of abducting Michele Bachmann and fastening her to his chin. The Phantom Pair track the fur-surfaced wrestler to a rich kid’s pad to which he’s been instructed to deliver some rill purty packages. As “Santa” does, the mobsters–who have secretly laid in wait–drift like a Yuletide through the door when it’s opened to admit Father Christmas. The Sandman busts up the subsequent stick up, but the crooks flee the scene, taking “Santa”–essentially a kidnap victim at this point–with them. Again the mystery man and the Golden Boy give clandestine chase, being led back to Miller’s Department Store where the mobsters have set about cracking the store’s ironically-named safe, itself nestled snug in the Toy Department like a Victorian child dreaming of sugar plums and chastity belts.

Per the rousing success of their last melee, the Sandman and Sandy attempt a sneak attack, but, despite the obvious advantage of purple-and-yellow spandex camouflage set against the Toy Section’s armada of little, red wagons, the Phantom Pair are discovered and engaged by two pug-ugly mugs. The resulting scrape rolls into the Sports Department–“Baseball bats, wrestling mats, legion hats, discount gats, writing slats, work your lats, remove your fats, everybody out!”–where one mobster breaks a smooth, wooden penis proxy over Sandman’s silicate cranium and the other thug thugily hurls a baseball into Sandy’s Golden puss, despite the fact that the World Series must have taken place ten weeks before. “I’m at bat!” announces the first pug. “An’ I’m pitchin’!” complements the second mug. It’s probably bad form for two mob torpedoes to make sweet love right in the middle of the fight, but hey–’tis the Season, right?

Just as the carnage is about to climax in a Sandman-killing gunshot delivered via ruthless skel, “Santa” transmutes into Santa by way of the Christmas Spirit. This transmutation manifests in a Norman Rockwellesque way–that is, Santa spares Sandman the Big Sleep by hurling a swag sack into the skull of the skel. This affords the Nocturnal Nemesis of Crime a much-needed chance to recover, and he parlays his factory-fresh recovery into a much-needed mug-clubbing. The coppers arrive like a New Year’s Day hangover, and just as they are about to shatter prepubescent Gentile hearts everywhere by tossing Santa into the Ultimate Naughty Wagon, the Sandman vouches for him. “If you’re okay with Sandman, you’re okay with me!” the flattest flatfoot affirms, proving that Internet axiom that purple-and-yellow spandex > red-and-white fur. “Gosh,” the wrestler-turned-redeemer swoons as he physically thanks the copper. “Me shakin’ the mitt of the police chief!” As if that weren’t diabetes-inducing enough, Santa-without-the-quotes arrives with Sandman and Sandy at Suicide Slum to distribute the Dodds-bought toys to the li’l chilluns. “An’ ta think I used ta call ’em brats!” he supposes. The li’l chilluns, he means–not the toys.

If Bearde hadn’t shown up to aid the chilluns, the Salvation Army would have, probably bringing a Santa–or, more correctly, a “Santa”–of their own…and just as Man Mountain Bearde hides a dark agenda beneath a facade of benevolence, so, too, does the Salvation Army. While promising to help anyone in need, any member of the LGBT community who wants to transition from helpEE to helpER will find slim pick’ns indeed, since the waysies of the homosexy offend the red-kettled belief system of the Salvation Army. The Es-Ay has granted then rescinded benefits for employees who claim a same gender partner, and they’ve spent no small amount of money actively lobbying against LGBT rights in this country and in many others. Their bell-ringers may try to control the damage by disguising themselves with warm smiles and fuzzy beards, but no matter how hard they try to cloak their bald-faced bigotry with a red bib, they’ll always, until they change their policies, be beyond Salvation.