Micah Sampson is a seventeen year old college drop out, feeling his life draining away from his as he works as a supermarket. He has low self esteem, mostly surrounding his body, and a huge crush on the American older man who works at the fish counter. On Micah’s last day at the market, said sex-bomb asks him out on a date, which also happens to be the night on which Micah discovers he has superpowers.

Elemental Micah is a blend of a superhero origin story and a tale of friendship, self discovery and finding your place in the world. As most superhero stories are about these things to some extent or another, it’s a very effective blend.

What’s good about it?

The cast of characters, while small so far, is well told. Micah and his friends Dana and Simon are complex, interesting characters with hopes and regrets of their own, that Georgiou weaves into the story naturally. He never pushes the superpowers to the back seat, but instead character background and conversation (it’s a little early for character development) happens while, for example, Micah and Simon are chasing down a tornado in London.

What’s bad about it? 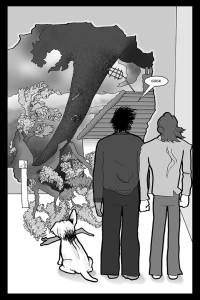 Well, the art could use some work. It’s obvious that this is Georgiou’s first comic work to star human characters and telling a story of this kind. His character designs are great, but there’s some awkwardness in telling a cohesive story with them. At some points I had real trouble figuring out what was happening. Which is a shame, because the plotting is so tight, and characters so interesting that better art would make this comic really very good indeed.

As mentioned above – it needs work, but I suspect that this will pick up as the comic continues. The art is greyscale, and shows a lot of potential in terms of character design and plotting, but needs to be developed more before it’s up to the standards of the writing. Nevertheless, the writing and the characters carry the story so well, that it’s definitely going to be worth the wait.

Editors’ Note – Thanks for reading! Elemental Micah is out now at Indy Planet, comiXpress, and Amazon’s Kindle store. To read online and check out more from Michael Georgiou please visit https://michaelgeorgiou.com. And don’t forget check out the New Readers blog to read more super neat comic reviews from Debi and the other awesome contributors of New Readers…start here! See you back here again tomorrow for a great look at the CBLDF 2011 Annual! – PKA