It’s so awesome living in an era where technology grows and changes by the nanosecond. Everything from cellphones to televisions to high-end toilets fills me with so much fascination with the way technology has made life so much easier.

I remember clearly the very first portable phone I ever owned. I bought it in 2001, right after my big California vacation, a fulfillment of a lifelong dream to visit Hollywood and rub shoulders with the rich and famous. In fact, I have one of those rich and famous people to thank for it. At the time, I was still a huge Madonna fan. She had just released one of her better albums, Music, and was kicking off her Drowned World tour to promote it. Another lifelong dream of mine had been to witness her stage production firsthand. After failing to obtain a ticket to the Chicago performance before they sold out faster than discounted poppers at a gay disco, I went online and managed to get my computer keys on a seat at the Staples Center in Los Angeles. 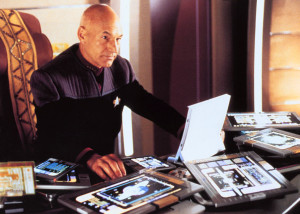 Little did I know my trip would turn into something of a challenge. You see, my ticket was for Madonna’s show on September 11, 2001. (Date sound familiar?) I arrived in LA on September 10. Immediately after checking into my hotel, I headed to Hollywood Boulevard. I had a grand time strolling the Walk of Fame and worming my feet into Harrison Ford’s footprints in front of Grauman’s. I even stumbled upon the Hollywood Museum, where I had the orgasmic opportunity to sit in Jean-Luc Picard’s captain’s chair.

The next day, though, my itinerary came to a screeching halt. Early in the morning, I was wakened by a phone call from my mother. She wanted to make sure I was all right because “a building in New York had been bombed.” I assured her I was fine; after all, I was on the opposite side of the country. Without another thought, I hopped out of bed to start the day’s adventure. I’d intended to hit Paramount Studios that morning to take the grand tour, hoping to catch a glimpse of the Star Trek: Enterprise soundstage or bump into one of the cast members. Alas, my only physical connection to one of my all-time favorite sci-fi sagas was to be with Patrick Stewart’s ass print. When I arrived at Paramount, I was greeted by a sign on the front door that said bluntly, “NO TOURS.”

As the day progressed, I learned the reason why there were no tours. The entirety of Los Angeles had screeched to a halt, becoming a virtual ghost town. And to top everything off, Madonna canceled her show for that night. The diva was gracious enough to reschedule for the following Saturday evening—one day AFTER I was supposed to leave LA. However, after a bit of finagling, I managed to rebook my flight and remain in my hotel those extra couple days.

Rearranging those plans could’ve been a little easier if I had already owned a cellphone. Before that trip, I never saw a need. I rarely traveled anywhere, so a landline and an answering machine were sufficient. But in trying to get back to Illinois from California, I realized just how crucial an always-at-the-ready method of communication can be. My plane was late in leaving LAX, which caused me to miss my connection in Memphis. You can just imagine my frustration at attempting to contact my family through the airport’s payphone in order to let them know I’d be late.

After finally returning home, I made a point of purchasing a cell of my own. The one I settled on seems so prehistoric by today’s standards. It was one of those early Nokia “peanut-shaped” phones, and all it did was make and receive calls. It did come with voicemail, but that’s about it. Since then, I’ve upgraded a few times until I finally settled on an iPhone 3 ½ years ago. There is absolutely no way to compare my current phone with my first phone, and—like pretty much everyone else—I can’t imagine life these days without it.

One of the reasons why I wanted an iPhone was because I had heard it was possible to read comic books on it. A couple years prior, I discovered the Internet could grant me access to titles I might not have been able to locate elsewhere, but it was a bit of a pain to try and enjoy them on a bulky laptop. Granted, reading comics on a three-inch phone screen wasn’t much better; the pictures and word balloons were so small as to make them almost impossible to see. It was a more comfortable alternative, though, and it got me to thinking: wouldn’t it be cool if there was a device that was just as unwieldy yet large enough to actually be able to see a full comic book page without having to strain my aging eyes? Such machines were shown to be a possibility on Star Trek, where crewmembers read documents and jotted notes on their little portable electronic PADDs. Trek had already somewhat accurately predicted a pocket-sized, handheld communicator, after all.

Lo and behold, the Apple gods must’ve heard my prayers. A year after I purchased my first iPhone they released the first generation iPad—which is essentially an iPhone on steroids. I couldn’t have been more elated. I was instantly hooked from the moment I loaded my first comic, and my love affair with the device continues to grow day by day. Of course, I DO use it for other things, but reading comics is definitely the top priority. 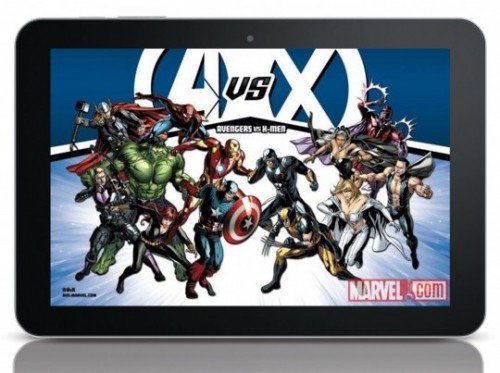 It didn’t take long for the major comic book publishers to jump on the digital bandwagon. In the past couple of years, DC, Marvel, IDW, and other companies have created their own individual comic-book reading apps. Most of them offer exclusive content, as well as enhanced versions of print publications. DC has been able to continue the Smallville story in electronic format, while Marvel has their Augmented Reality, a feature that expands on the stories presented in paper form. I can very well see publishers pushing these innovations even further. In the future, comics could take the form of animated holograms, where the heroes and villains move and speak and duke it out right in front of us.

There are still a number of old-school diehards who claim that nothing can ever replicate the experience of holding a paper comic book in your hands and turning the pages as the smell of newsprint wafts over you. To a certain extent, I agree. There’s always something to be said for nostalgia. But the reality we’re facing is that print communication is fast becoming obsolete. Even Newsweek magazine ceased publication of its print version last month, relying solely on digital delivery. Think about it. When was the last time you yourself grabbed a pen and a sheet of paper and actually wrote out a letter? Heck, when was the last time you grabbed a pen and wrote out a check to pay your bills? These days, technology advances so much we can barely keep up with it. My biggest disappointment is that I will not be around forever in order to see just how far it does go.

That is, until someone comes up with a way to transfer the contents of our brains to USB drives…which may not be too far away at all…