California Senate Bill 1172 is a morsel of mandate passed by the Golden State’s Legislature that is currently tarnishing its weary way through the Circuit Court system. The bill, when enacted into law, will prohibit state-licensed psychiatrists from administering to underage patients “conversion therapy” which purports to change a teen’s gender identity from Broadway Showtunes to Western Ballads. If the Circuit judges are searching for precedent in connecting conversion to perversion, they need look no further than the premiere of DC’s Cat-Man and the pride of conversions therein.

Secretly-inveterate gambler Tom (as in “tom CAT,” y’dig?) Blake (as in…um) is plagued by a problem: his life as a millionaire jungle cat catcher has become sigh-enducingly boring. Since Tom-Tom lives in Gotham City, the cure for all sigh-enducing boredom is to match animal-themed wits with the municipality’s pointy-eared, self-appointed protector, Batman. Of course, the Dark Knight doesn’t necessarily frown upon millionaire jungle cat catchers, so Tom Blake, in order to attract the Caped Crusader’s order-oriented attentions, enacts the most sensible-in-a-codependent-way option, converting himself into a gaudy outlaw.

Blake performs a personal evaluation, critically considering what Tom-O-Centric parachute color he might bring to Caped-Crusader-worthy villainy while feeding calcium phosphate-powdered steaks to a penned-up lion. Sure, Capone possessed oodles of ruthlessness, and Manson possessed scads of crazy, but what will put a villain mask and shoulders over Batman? Tom shares his epiphany with his black-spotted pet leopard: “Imagine what I, with my knowledge of cat lore, can do!” Ah, yes–cat lore, of course. Should have seen that one comin’.

One short week later, the Gotham Museum’s Bast-pinioned Egyptian wing unfurls, and the Dynamic Duo appear as honored guests which is just asking for trouble. Sure enough, trouble arrives in the form of Gotham’s debuting pheline pharaoh who springs from a sarcophagus wearing yellow and orange bandages that closely resemble a skin tight cat costume. 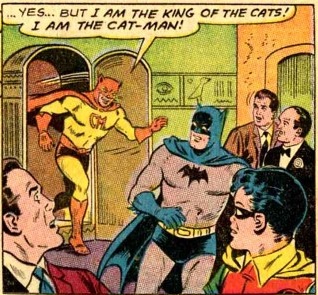 Snatching the Bast bust from the trust of the upper crust, Cat-Man brushes past the Cowled Crusaders. Robin proves a leetle too big for his scaly, green britches when he reaches for the quipping, receding scoundrel. In response, the Cat-Man perpetrates a demon pimp kick from hell, tearing the Boy Blunder’s yellow cape because its elven collar makes it slightly more fab than Cat-Man’s uncollared one.

Cat-Man then converts himself into an absence, eventually arriving via Cat Car at his cat-acomb headquarters (because calling his lair the Cat Cave would be one stalactite to far) where the feline felon considers the implications of his puss-in-booty. “Hmm! I wonder if I REALLY turned to crime to escape boredom?” the newly-minted malcontent muses. “Maybe I’ve been hiding the truth for myself…I secretly WANTED to steal to regain the wealth people still think I have!” Hey, it worked for Eddie Van Halen, so why not?

Cat-Man resolves to convert himself further from a rich super-villain to an even-richer super-villain, and he catches a lucky break toward that end when a clue menagerie sends Batman and Robin to the wrong locale for the Catty Crusader’s sophomore effort. Batwoman–think an even-more-bungly version of the Silver Age Lois Lane but with a pointy, red mask to becloud her bungle-oriented blushes–challenges Cat-Man to a duel that will decide which of them is Batman’s Most Effective Stalker. Happily, this duel delays he of the yellow tights long enough for Batman and Robin, backtracking from their initial wrong-caped deduction, to re-engage their cat-and-flying-mouse game, but the bad guy slips away again.

Batman and Robin deduce Cat-Man’s civilian identity, tracing that shredded calcium phosphate–“It’s put on meat fed to big cats!” Batman just happens to know–to Gotham’s only millionaire jungle cat catcher because they are the world’s greatest detectives (man and boy cat-egories). The Dynamic Duo then employ their clever minds to consult an off-panel Yellow Pages, arriving at the sub-suburban address of Blake, Thomas. There they unearth the cat-acomb headquarters but fail to factor in the whole “bad guy wanting to trap intruders” thing. Instead of caging Cat-Man, the Masked Manhunters are penned in by floor-up-pushing, electrified bars–the metal ones, not the Midori-Sour-serving ones.

The good guys escape, only to find themselves confronted by an…unlikely threat. “Great Scott!” the Dark Scoutmaster laments. “The Cat-Man–atop a colossal robot cat!” This isn’t some kind of Singaporese sex slang, or anything–he means it all literal-like. The colossal robot cat–the crowning achievement of what must have been a berry busy week for TomCat–tries to make prey out of Flying Mouse Man and Canary Boy who seek sanctuary within Cat-Man’s workshop. Batman proves there’s such a thing as being too crowning-achievementy when he scoops up a bucket helpfully labeled “Nuts & Bolts,” tossing its motley contents into the big pussy’s metal manpleaser, foully fouling its feline flywheels and converting it into a humongous heap of a high-tech scarp iron.

The still-slippery sinner manages one more escape, venturing further into the Dante-esque cat-acomb’s butt end where awaits secret salvation. “Batman doesn’t know that tunnel beyond is a short-cut to my Cat Car!” Cat-Man mentally chortles as he slinks toward a single impediment–a surging rapids. The caped crook performs a rapids-traversing cat-leap, but, perhaps due to a case of cat-aracts developed on the way, Cat-Man chooses as a landing pad a midstream boulder composed of gravel, a decision that ends about as well as inviting super-heroes to be the honored guests at your museum opening.

Cat-Man would return, of course, surviving a number of conversions–from maladjusted misfit to harried has-been to antiquated anti-hero…but what’s been consistent in his C-list character has been his attraction to flamboyant thrill…and any “therapy” designed to “convert” him would be as futile and as purposeless as trying to get his pet leopard to change her black spots.